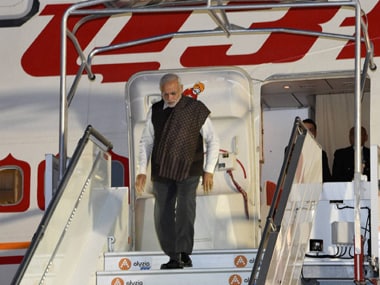 Paris: Prime Minister Narendra Modi arrived in Paris on Thursday night on the first leg of his three-nation tour during which he will hold talks with French President Francois Hollande and meet business leaders.

During his four-day stay, Modi will hold talks with Hollande and meet business leaders. The focus of the talks will be civil nuclear, defence and trade.

A highlight of his stay in France will be a boat ride with Hollande, which is being described as 'naav pe charcha' (chat on boat). Earlier, Modi has had 'chai pe charcha' with foreign leaders, including President Barack Obama during his visit to New Delhi in January. In France, the Prime Minister will also visit the World War-I memorial and pay tributes to about 10,000 Indians who lost their lives while fighting alongside France.

India is hoping that French companies will participate in the 'Make in India' programme initiated by Modi.

After wrapping up the first leg of his tour, Modi will head to Germany, where business and technology will be the focus his engagements aimed at attracting participation in the 'Make in India' campaign.

In the third and last leg of his tour, Modi will travel to Canada, marking the first standalone visit by an Indian Prime Minister in over 42 years.

Ahead of talks with French President Francois Hollande, India on Friday said it expects "movement" on a proposal for setting up French nuclear reactors in Jaitapur in Maharashtra as well as Rafale fighter deal, both of which are pending for long.

These issues, along with trade, will be high on the agenda of substantive discussions between the two leaders amid India's keen interest to get participation of French companies in the 'Make in India' programme. Terrorism, against the backdrop of an attack here three months back, will also be discussed.

"India and France are strategic partners. In this context, the issues of civil nuclear and defence cooperation will be discussed. The issues you referred to will also be discussed. We expect movement on these issues," External Affairs Ministry spokesman Syed Akbaruddin said here when asked whether the two leaders will talk about Jaitapur nuclear project and multi-billion dollar Rafale deal. There will be substantive discussions on defence and nuclear issues. Wait for the outcome," he added.

The spokesman said India expects French companies to participate in 'Make in India' programme in the field of defence as well as civil nuclear energy, "where India can make some nuclear installations with France."

Similarly, the deal to supply 126 Rafale fighter planes is also deadlocked because of differences over price.

Modi, who arrived here today on a four-day visit, will also address two meetings with French CEOs – one on infrastructure and another on defence.

He will also have 'Naav pe Charcha' (chat on boat) with Hollande when they go for a cruise on Seine river which passes through Paris.