By Matthias Blamont PARIS (Reuters) - A man arrested in Paris after two people were wounded with a meat cleaver says he was targeting weekly satirical magazine Charlie Hebdo in the attack, a police source said on Saturday. 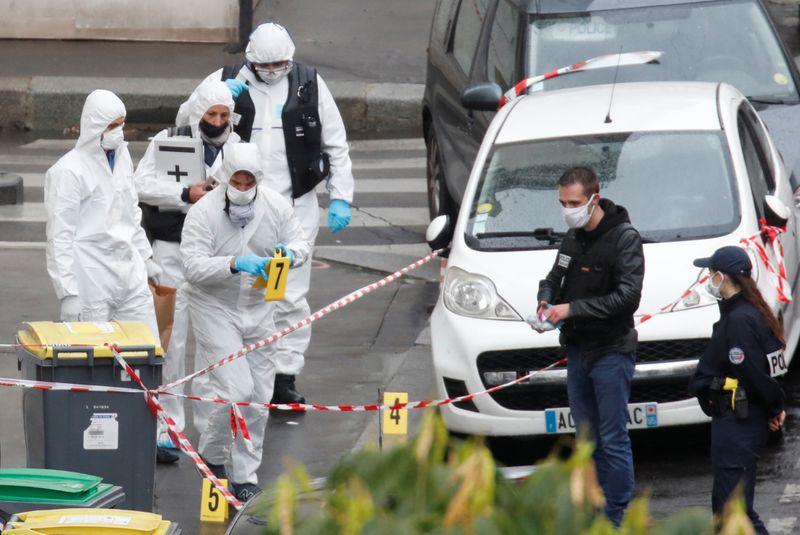 PARIS (Reuters) - A man arrested in Paris after two people were wounded with a meat cleaver says he was targeting weekly satirical magazine Charlie Hebdo in the attack, a police source said on Saturday.

The two people were attacked on Friday in front of the former offices of Charlie Hebdo, where Islamist militants shot dead 12 people in 2015 because the magazine had published cartoons depicting Prophet Mohammad.

Friday's violence coincided with the start this month of the trial of 14 alleged accomplices in the 2015 attack, in which the gunmen killed 12 people. On the eve of the trial, Charlie Hebdo had republished the cartoons..

The police source said the suspected assailant, who Interior Minister Gerald Darmanin said was from Pakistan and arrived in France three years ago as an unaccompanied minor, was cooperating with the police.

A judicial source said the suspect's custody had been extended on Saturday morning. Under French law, he faces a formal investigation at the end of the process.

A second suspect was also detained moments after the attack and prosecutors were trying to establish his relation to the attacker. He was released without being charged, the source said.

Charlie Hebdo moved to a secret location after the 2015 attack. Its former offices are now used by a television production company.

Two of the production company's staff, a man and a woman, were in the street having a cigarette break when they were attacked, according to prosecutors and a colleague of the victims.

Al Qaeda, the militant Islamist group that said it was responsible for the 2015 attack, threatened to attack Charlie Hebdo again after it republished the cartoons of the Prophet.

France has experienced a wave of attacks by Islamist militants including bombings and shootings in November 2015 at the Bataclan theatre and sites around Paris that killed 130 people. In July 2016, an Islamist militant drove a truck through a crowd celebrating Bastille Day in Nice, killing 86.