Islamabad: Nawaz Sharif, known as the 'Lion of Punjab', became the Prime Minister of the politically unstable Pakistan for a record three times, but every time he was forced to quit in the middle of his term — first by the presidency, then the military and now the judiciary.

Sharif, who leads the country's most powerful political family and the ruling PML-N party, successfully managed to swim through all the "tsunamis" since he assumed power for the third term in June 2013, but a Supreme Court ruling against him in the Panamagate case struck a heavy blow to his career.

The court verdict disqualifying Sharif plunges Pakistan into a political crisis at a time when the country is facing brittle economy and surge in militancy.

The 67-year-old wily political leader, seen by many as someone who can fix the country's problems such as the economy and the terrorism, found himself besieged by problems after Panama papers showed illegal money laundering by him in the 1990s when he twice served as Prime Minister to purchase assets in London. 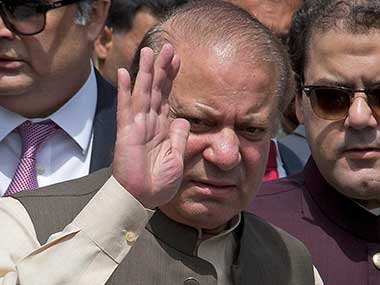 International Consortium of Investigative Journalists disclosed that Sharif's children — Mariam, Hassan and Hussain - were the beneficial owners of offshore companies set up in the British Virgin Islands, a known tax haven.

The revelation forced Sharif to address the nation twice and disclose a detailed account of his family's businesses in the National Assembly, explaining how his late father had built the business empire, which was the source of income used to buy properties in London and other holdings.

In May, the Supreme Court set up a six-member joint investigation team (JIT) to investigate the charges against Sharif and his family.

Sharif, his sons, daughter and brother Punjab Chief Minister Shahbaz Sharif all appeared before the JIT which comprised officials from Pakistan's powerful spy agency ISI and the military intelligence.

In its report submitted to the apex court on 10 July, the JIT said the lifestyle of Sharif and his children were beyond their known sources of income and recommended the filing of a new corruption case against them.

On 21 July, the court reserved its verdict after concluding the hearing and ruled against Sharif on 28 July.

A steel tycoon-cum-politician, Sharif had served as the Prime Minister for the first time from 1990 to 1993.

During his tenure, Sharif developed serious differences with conservative president Ghulam Ishaq Khan, who dissolved the National Assembly using his reserve powers in April 1993. In July, Sharif resigned under pressure from the army but made a settlement that resulted in the removal of Khan as well.

Sharif's second term as Prime Minister from 1997 ended in 1999 when then powerful Army chief Pervez Musharraf staged a bloodless coup.

In a dramatic fall from grace, Sharif ended up in jail, convicted of hijacking charges for trying to stop a plane carrying Musharraf from landing. He then went into exile in Saudi Arabia and did not return to Pakistan until 2007, when he teamed up with the PPP to force Musharraf from office.

Both of Sharif's first two stints had ended in the third year of his tenure.

In 2013 general elections, Sharif's centre-right Pakistan Muslim League (N) (PML-N) emerged as the single largest party falling just short of a majority. But, he was able to muster the required strength within days as many independents came forward to support him.

During his third term, Sharif had managed to swim through crises such as massive protest rallies outside the parliament in his second year in office by cricketer-turned-politician Imran Khan's Pakistan Tehreek-e-Insaf party and supporters of influential cleric Tahirul Qadri.

Their protests only ended after the tragic massacre at the Army Public School in Peshawar where Taliban terrorists killed 150 mostly children, forcing political leaders to sit together and come up with a solution to counter terrorism.

During this tenure, Sharif launched a number of development projects including the multi-billion China-Pakistan Economic Corridor (CPEC).

His another major achievement was the launch of military operation Zarb-e-Azb in 2014 to flush out the militants from North Waziristan and South Waziristan — a hub of terrorism.

Sharif, who was considered to be soft on hard-liners, backed a ban on Tablighi Jamaat from preaching in educational institutions. In a stern message to extremists, his government hanged Mumtaz Qadri who shot dead Punjab Governor Salman Taseer in 2011 over his opposition to blasphemy laws.

Sharif was born in 1949 into a wealthy family of industrialists in Lahore and was educated privately at English-language schools.

He got a degree in law from the University of Punjab before joining his father's steel company and eventually entering politics after his family was hit considerably following nationalising of nationalised private industry in the 1970s by then Prime Minister Zulfikar Ali Bhutto.

Under the patronage of former military ruler Zia-ul Haq, Sharif became first finance minister and then chief minister of Punjab - a post he held for five years from 1985 until he was elected prime minister in 1990.