By Yosri Al Jamal HEBRON, West Bank (Reuters) - Palestinians in Hebron accused Israel on Tuesday of trying to rid the flashpoint city of witnesses to its actions in the occupied West Bank by ejecting a foreign observer force that helps safeguard residents. Israeli Prime Minister Benjamin Netanyahu said on Monday that he will not renew the mandate of the Temporary International Presence in Hebron (TIPH), accusing the observers of unspecified anti-Israel activity. The force has declined to comment 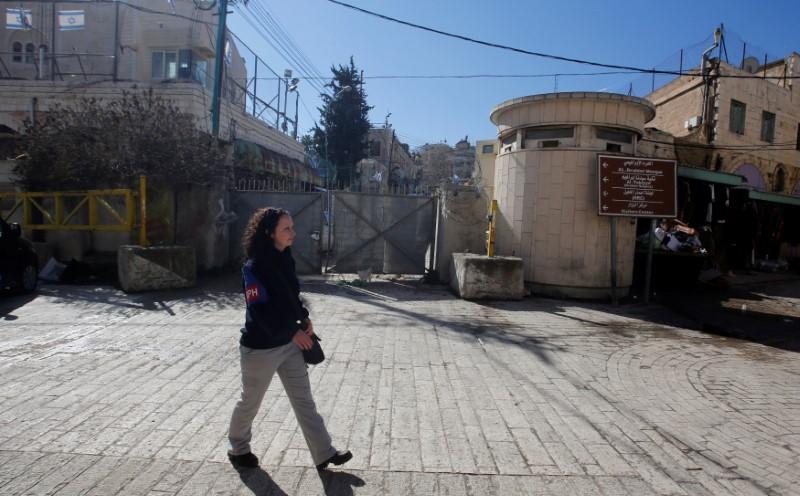 HEBRON, West Bank (Reuters) - Palestinians in Hebron accused Israel on Tuesday of trying to rid the flashpoint city of witnesses to its actions in the occupied West Bank by ejecting a foreign observer force that helps safeguard residents.

Israeli Prime Minister Benjamin Netanyahu said on Monday that he will not renew the mandate of the Temporary International Presence in Hebron (TIPH), accusing the observers of unspecified anti-Israel activity. The force has declined to comment.

Hebron, a Palestinian city of 200,000 people, is home to a community of around 1,000 Israeli settlers who are heavily guarded by a large Israeli military presence.

The TIPH was set up after a Jewish settler killed 29 Palestinians at a Hebron shrine holy to both Muslims and Jews in 1994. The city has also seen stabbing and shooting attacks against settlers and Israeli soldiers by Palestinians.

Since Israel partially withdrew from Hebron in 1998 under interim peace deals with the self-rule Palestinian Authority, the TIPH has monitored "breaches of the agreements (and) violations of international humanitarian law and international human rights law," the force's website says.

"The settlers' attacks will increase," said Aref Jaber, a Palestinian resident of Hebron. TIPH's presence was particularly helpful to schoolchildren, he added, because they patrol the city "in the morning and the afternoon, when they go to and return from school."

TIPH draws staff from Norway, Italy, Sweden, Switzerland and Turkey. The TIPH website says it has 64 international staff in the city. An Israeli official said its mandate ends on Jan 31.

"[TIPH] is our window to the world. They can show the Israeli occupation's ugly face – which is definitely annoying to the Israelis," said Bader Daour, a ceramics merchant in Hebron's old city.

Settler leaders welcomed news of the force's upcoming departure. They have accused the TIPH of harassing settlers and agitating against them.

Yishai Fleisher, a spokesman for the Hebron Jewish community, said the TIPH observers "created an atmosphere of conflict, not a congenial atmosphere of peace."

Jews and Palestinians, he said, have inhabited the city for centuries: "We know each other and I'm sure we'll find a way to get along without Norwegian help," Fleisher said.

Peace talks between the Israelis and Palestinians collapsed in 2014. Most world powers consider Israel's settlements in the West Bank, territory captured by Israel in a 1967 war, to be illegal. Israel disputes this, citing biblical, historical and political ties to the land.

"(The Israelis) don't want there to be witnesses to their crimes, or any other crime they commit against the Palestinians anywhere, and especially in Hebron," said the city's mayor of Tayseer Abu Sinaneh.