Pakistan gets 3rd degree on Balochistan

Washington: Perhaps you could call it evolution. But the crippling irony of a blustering Congressman, who once relentlessly berated India on Kashmir, standing up for the right of self-determination of the Baloch people and railing against Pakistan was overwhelming.

So there was Dana Rohrabacher, a Republican Congressman from California, loudly declaring Pakistan as the “enemy” of the United States and advocating support for an independent Balochistan with two other latecomers-to-reality Congressmen at a smallish press conference. The room was filled largely with Baloch activists and Indian and Pakistani journalists. Mainstream American media gave this local show a miss. Pardon me, if I sound skeptical. It is because I am. I can rewind to a time when the same advocate of “freedom and democracy” railed against India and demanded independence for Kashmir.

Those days the Pakistan Embassy in Washington was supremely satisfied at the recurring tirades against India by Rohrabacher and fellow traveler Dan Burton, a Congressman from Indiana. Today, the Indian Embassy has reason to smile for Rohrabacher is openly advocating better friendship with New Delhi and squeezing of Pakistan. The big difference is that India doesn’t have to supply any charts or statistics on Pakistan’s “kill and dump” policies against its own people in Balochistan as Pakistan routinely used to against India. Or tell the Congressmen that many assaults ordered by their once favourite dictator, Pervez Musharraff, against Baloch leaders (especially the 2006 massacre of Akbar Khan Bugti and 36 others) in Balochistan were greatly assisted by sophisticated US equipment given to hunt down Al-Qaeda and Osama bin Laden. 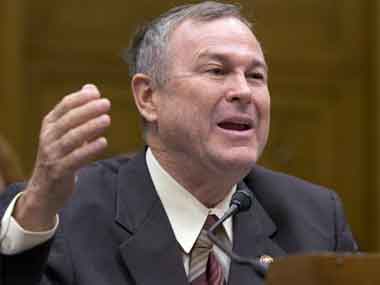 Dana Rohrabacher, a Republican Congressman from California, loudly declared Pakistan as the “enemy” of the United States and advocated support for an independent Balochistan. Saul Loeb/AFP

Rohrabacher, chairman of the House Foreign Affairs Subcommittee on Oversight and Investigations, determined to punish Pakistan for its many perfidies, introduced a resolution in February saying the Baloch had a historic right to self-determination. It caused an earthquake in Islamabad where comfort with taking the Americans for a ride is so great that the establishment never imagined the Pakistan army’s brutality would ever be questioned. By anyone.

But so complete has been Rohrabacher’s conversion that when a dutiful Pakistani journalist representing the official news agency asked about Indian “oppression” in Kashmir at the press conference, he got a tongue-lashing. “I find it a despicable tactic to deflect attention (from Balochistan to Kashmir). Let’s not talk about this, let’s talk about Kashmir. I am incensed,” the angry Cogressman roared. To those in Pakistan who claim he is funded by Baloch dollars to rail against Pakistan, he said every trip he made to learn about Balochistan and the ongoing struggle, was at the US taxpayers’ expense.

For good measure, he asked for regime change in Pakistan because it is “vicious” and killing its own people. But the Obama Administration only wants “to buy our enemies.” It is currently busy buying an office for the Taliban and planning the release of murderous men to placate that enemy. Instead, Rohrabacher advised, America should befriend “the enemy of my enemy” to stay ahead.

Of course, the Pakistanis don’t read the US Congress well, lulled as they are by the many cushions provided by the US executive branch, mainly the State and Defence Departments. Maverick Congressmen can make life hell or heaven for countries as India has learnt over the years. It took a far-sighted Jewish maverick Steven Solarz, a Democrat from New York, to first talk positively about India on Capitol Hill in the 90s, mainly because Solarz saw the well-heeled Indian immigrant community as a campaign chest. He went on to genuinely champion India’s cause with time. But for every Solarz, there was a Rohrabacher or a Burton, ever ready to pounce on India with the Kashmir stick. If the Indian Americans funded Solarz generously, the Pakistanis funded the other side. It was all part of the game.

But 2012 is substantially a new reality. Education and evolution have both happened on Capitol Hill on the question of India and Pakistan. And Rohrabacher’s new avatar was inevitable. Capitol Hill is the home of American politicians, not diplomats and they are less constrained as a species. They can change track without as much as a signal.

“I was operating under false pretences. I did not know how much Pakistan was involved in supporting radical Islam,” Rohrabacher said by way of explanation on Tuesday. “We spent a lot of time lying to ourselves. I was Pakistan’s best friend in the US Congress in the 1980s.” He was talking of the good old days when nearly $20 billion flowed to Pakistan to help Afghan Mujahideen fight the Soviet occupation of Afghanistan. It was approved and blessed by the US Congress. All was hunky dory. At the time radical Islam was an American tool, not an American fear in the larger game of defeating Communism. I wonder how many Washington stalwarts of those days wish for the old enemy – contained and containable – rather than the new one which mutates, transforms, spreads and knows no boundaries.

Of course, the Baloch activists are thrilled at this tiny inroad they have made into Capitol Hill. They saw the hearing in February as a breakthrough with officers of Amnesty International and Human Rights Watch testifying about the brutality of Pakistani forces and the thousands of disappearances. There was even Col. Ralph Peters, a retired US Army officer, who has openly suggested cutting and chopping Pakistan along ethnic lines since the state has clearly failed to coalesce into a meaningful whole. The only academic to testify was C Christine Fair of Georgetown University who later posted a column distancing herself from the whole affair. She questioned the motive of Rohrabacher and others in holding the hearing.

But it would be a mistake to dismiss Rohrabacher’s evolution as merely predatory or opportunistic. Pakistan has overplayed its after-me-the-deluge card gazillion times over. No one is buying it anymore. Instead, attention is shining on its lies, its brutalities and its contradictions. But then the khakis in Pakistan have consistently shown how immune they are to history and its lessons.