Geneva: A banner with the slogan 'Pakistan Army Epicenter of International Terrorism' has been put up at the iconic Broken Chair during the 43rd session of the United Nations Human Rights Council. It aims to draw attention to global terrorism emanating from Pakistan and urges the United Nations to take immediate steps to deal with threats to global security. 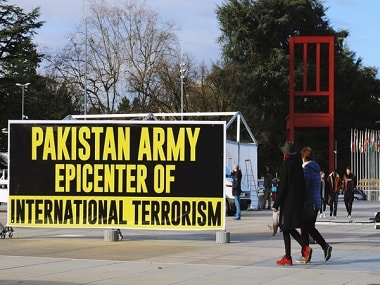 A protest is scheduled to be held by Baloch and Pashtun activists in front of the United Nations Office at Geneva, near the Broken Chair, against the involvement of the Pakistani military establishment in breeding terror outfits.

The unregulated financial structure of Pakistan paves the way for the irregular transfer of money while feeding terrorism in the country. According to reports, terrorists in Pakistan are able to organise, plan, raise funds, and operate easily in the country because of lack of governance and political will to address the problem.

The government is not willing to tackle this issue due to its engagement with illegal activities. Therefore, the activists are demanding that the UN should reprimand Pakistan, take immediate action to stop this and establish the rule of law in the region.