Pak softening on trade will change face of South Asia

The shift in Pakistan's policy implied in the country wanting to normalise trade relations with India is like a breath of fresh air in the stale atmosphere of confrontation in which this region is normally bogged down.

Long stuck in a political logjam, increased and freer trade can go a long way in improving relations between the two adversaries. Trade has played a positive role in conflict resolution between neighbouring countries, the prime examples being the European Union and Asean. Apart from greater prosperity, strong economic ties have gone a long way in bringing countries with border conflicts closer together.

More open trade has several benefits beyond the economic. Improving trade would create an atmosphere that would help the Pakistan government normalise relations with India. 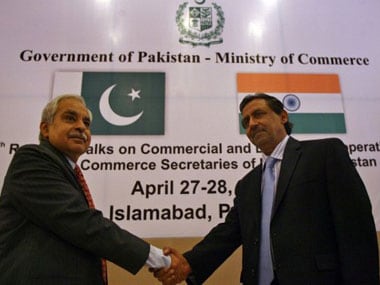 Long stuck in a political logjam, increased and freer trade can go a long way in improving relations between the two adversaries.Reuters

Pakistan is bogged down in its legacy where it sees India as the main enemy, even going to the extent of supporting and abetting fundamentalist Islamic forces that are destroying its society and shaking its institutions.

The jihadists ride on the backs of mainstream religious political parties which would not want relations with India to improve since it undermines their support. A Pakistani analyst, Pervez Hoodbhoy, observes, "The 60-year conflict with India has achieved nothing beyond creating a militarised Pakistani security state ...attempts to solve Kashmir militarily have bled the country dry and left it totally dependent on foreign aid."

Yet mainstream religious parties insist that increasing trade should follow an initiative to resolve the Kashmir issue. That has been the common refrain in Pakistan, but this appears to be changing. People have begun to realise that the wrong-headed obsession with India, largely responsible for its disastrous policy in Afghanistan, is breeding jihadists who are destroying Pakistan. This largely follows, as Hoodbhoy notes, from "the determination to emphasise a singular Muslim national identity ...[what is] missing is a strong common identity, mental makeup, shared sense of history, and common goals."

This has led to centrifugal tendencies that are pulling the nation apart. First, East Pakistan split in 1971, and now the fissiparous tendencies are pulling apart Baluchistan and Sind. Better trade leading to improved relations could play a role in binding together the country rather than a blind anti-Indian stance, which has proved so disastrous..

Normal relations between the two largest countries in south Asia would also go a long way in making Saarc (the South Asian Association of Regional Cooperation) an effective regional body. The full benefits of granting each other MFN (most favoured nation) status can only be realised if the South Asia Free Trade Agreement (Safta), legally in force since 2006 but politically in limbo, is revived.

Contrary to what the name suggests, MFN is not a special privilege given to any country, but applies to trade between all members of the World Trade Organisation (WTO). According India MFN status, already given by India to Pakistan in 1996, does not grant us any special favours, yet the term raises hackles in Pakistan because it is misunderstood.

The widespread support among business lobbies and the middle-class for more open trade has a rationale. Industry lobbies such as the Pakistan Business Council (PBC), which represents the 35 largest companies, have been maintaining that they can compete favourably with Indian products. The PBC estimates that increased trade with India would push Pakistan's GDP growth up by one to two percent.

Pakistan accounts for less than one percent of India's trade and India accounts for under 5 percent of Pakistan's trade compared to the much larger trade shares around the time of independence. In 1948-49, 70 percent of Pakistan's trading transactions were with India, while 63 percent of Indian exports went to Pakistan. Estimates suggest that trade between the two countries could be five to 10 times larger than the current $2 billion per year done through official channels.

Currently, trade between the two countries is marked by a 'positive list' of products that can be traded. The adoption of MFN principles means this positive list will be replaced by a much shorter negative or 'sensitive' list of items for trade - and thus enlarging the trade basket. Pakistan is likely to retain pharmaceuticals and automobiles in that list, among other items.

India currently has a high duty rate, averaging 32 percent, on agricultural imports such as rice, sugar and cotton- Pakistan's major potential exports. Non-tariff barriers on leather and textiles also make it difficult for Pakistani exporters to sell to India.

The changed Pakistani attitude toward trade with India is essential if Safta is to take off. At the 17th Saarc summit held last month in Maldives, Pakistan, the main stumbling block to easier trade in South Asia, had to retract as the mood turned against it. The South Asian region is today among the fastest growing in the world. Apart from India reaching nine percent levels of GDP growth (though that is now fading), both Bangladesh and Sri Lanka have growth rates of between six and seven percent. Only Nepal and Pakistan are languishing at growth rates of around three percent.

A World Bank 2011 regional strategy update for South Asia says that regional trade is a pathetic 2 percent compared with 40 percent for East Asia. Apart from increased trade, regional cooperation can have tremendous benefits.

* Less than one percent of Afghanistan's and Nepal'shydropower capacity ofover 100 GW is actually tapped. If the potential were more fully realised, trade in electric power could be huge, adding substantially to the income of these poor countries.

* Greater connectivity will help in integrating markets and is the best strategy for growth.

* Cross?border cooperation on water among India, Bangladesh, and Nepal offers the only long?term solution to flood control and water shortages in Bihar, Uttar Pradesh and Bangladesh.

One proposal that is waiting to take off once Pakistan removes its objections is a rail link from Afghanistan, through Pakistan and India to Bangladesh. Once India and Pakistan normalise trade relations, it could be the beginning of greater prosperity in South Asia.