By Joseph Ax HOUSTON (Reuters) - Former U.S. Representative Beto O'Rourke did not hesitate during Thursday night's Democratic presidential debate when asked whether he would confiscate assault-style weapons from Americans. 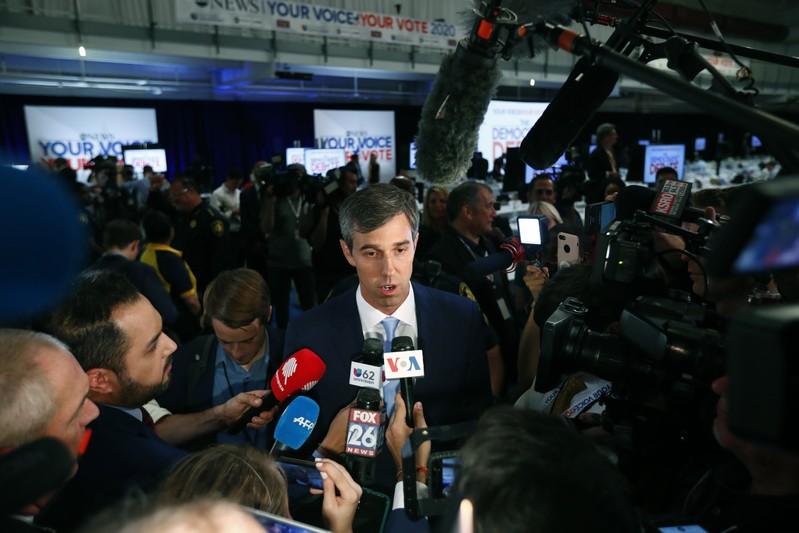 HOUSTON (Reuters) - Former U.S. Representative Beto O'Rourke did not hesitate during Thursday night's Democratic presidential debate when asked whether he would confiscate assault-style weapons from Americans.

"Hell yes, we're going to take away your AR-15, your AK-47," he said, instantly creating a viral moment – and potentially a fresh headache for lawmakers trying to persuade reluctant Republicans to pass new gun limits in Washington.

Opinion polls have found that tackling gun violence is increasingly a top priority for voters. The discussion on the debate stage in Houston, however, saw O'Rourke and other Democratic candidates endorsing ideas that go beyond any legislation under serious consideration in Washington.

U.S. Senator Chris Coons, a Democrat, and U.S. Senator Pat Toomey, a Republican and the co-author of legislation that would require background checks for all gun purchases, both expressed concern that O'Rourke's declaration could harm the bill's prospects.

"I don't think having our presidential candidates, like congressman O'Rourke did, say that we're going to try to take people's guns against their will is a wise policy or political move," Coons said on CNN on Friday, adding that he fears the debate video clip will be used to scare gun owners for years to come.

Republicans in the U.S. House of Representatives and other party leaders, who were at their annual retreat in Baltimore on Friday, immediately seized on O'Rourke's comments to portray Democrats as having a "radical agenda," as Vice President Mike Pence said.

"Leading candidates for the highest office in the land talking about taking firearms away from law-abiding citizens," Pence said of the debate. "The American people deserve to know this president, this vice president and these House Republicans will always stand for the Second Amendment right to bear arms."

O'Rourke has made gun safety the centrepiece of his campaign since late August, when his hometown of El Paso, Texas, was the site of a racially motivated mass shooting that killed 22 people inside a Walmart store.

Other Democratic contenders have also prioritised new gun limits in the wake of several mass shootings this summer, including incidents in Gilroy, California, Dayton, Ohio, and West Texas, underscoring how gun safety has been transformed from a politically risky topic to a core Democratic talking point.

Several candidates on Thursday called for a renewed ban on assault weapons, including former Vice President Joe Biden, who boasted he had helped pass an earlier ban in 1994 despite opposition from the National Rifle Association. That ban expired in 2004.

Biden also reiterated his proposal for a federal voluntary buyback program to purchase privately owned guns. U.S. Senator Cory Booker highlighted his plan to require licenses for gun ownership, another idea that has support in polls but virtually no chance of passing the Republican-controlled Senate.

Gun control advocacy groups like Giffords and Everytown for Gun Safety have deliberately focused their strategic efforts on broadly popular proposals like background checks, rather than more controversial measures like weapons bans or buyback programs.

The executive director of Giffords, Peter Ambler, rejected the assertion that O'Rourke's comments would lead to a backlash against the background checks legislation.

"On universal background checks, the question is asked and answered: America wants this to happen," he said on Friday in an interview in Houston, where he attended the debate alongside gun violence victims.

Ambler argued the key takeaway from the debate was the fact that the entire Democratic field has embraced gun safety as a major campaign issue. But he also made clear that Giffords is not calling for an assault weapons ban, let alone confiscation.

In a statement, Everytown spokeswoman Taylor Maxwell also kept the focus on background checks and "red flag" laws, which allow courts to confiscate guns temporarily from dangerous people, rather than the more aggressive policies aired on the debate stage.

"It's hard to overstate how much the politics of gun safety has changed - whereas candidates once avoided gun safety entirely, now they're jockeying to be the boldest," she said. "We welcome all ideas to prevent gun violence, but our focus right now is on passing legislation that can save lives and get through the Senate."

President Donald Trump expressed cautious support for expanded background checks and a red flag law following the mass shootings this summer, but he has since soft-pedaled those comments after meeting with the NRA.

Absent Trump's support, it is unlikely any gun restrictions would pass the Senate, where Republicans hold a 53-47 advantage. Senators who have been in discussions with the White House are waiting for the president to make his position clear.

(Reporting by Joseph Ax in Houston; Additional reporting by Richard Cowan in Baltimore; Editing by Colleen Jenkins and Jonathan Oatis)