MAPUTO (Reuters) - Mozambique's former guerrilla movement Renamo on Monday urged citizens to join it in rejecting preliminary results of last week's general election, citing fraud as incumbent President Filipe Nyusi took a strong lead. With around 37% of the votes counted from roughly 13 million registered voters, Nyusi of the ruling Frelimo party had secured 74.6%, while opposition Renamo candidate Osuffo Momade had 20.2%. The election is seen as make or break for the peace pact agreed by Renamo and Frelimo earlier this year, putting a formal end to decades of hostility between two groups that fought on opposite sides of a civil war that ended in 1992. 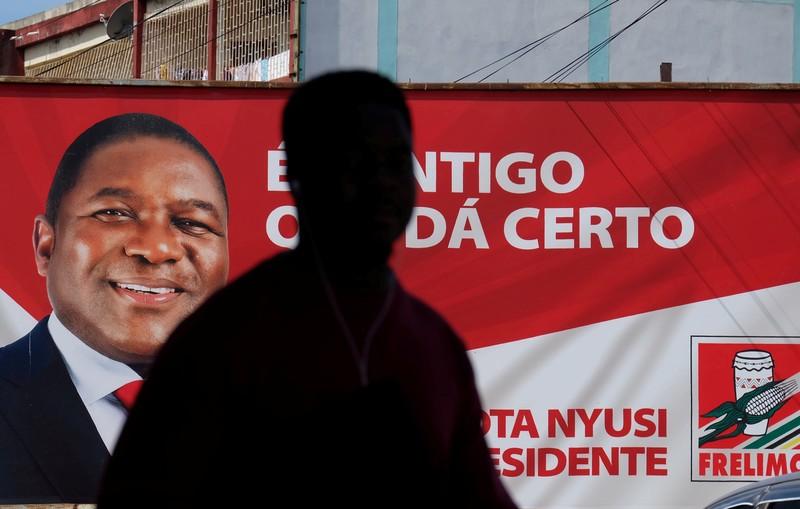 With around 37% of the votes counted from roughly 13 million registered voters, Nyusi of the ruling Frelimo party had secured 74.6%, while opposition Renamo candidate Osuffo Momade had 20.2%.

The election is seen as make or break for the peace pact agreed by Renamo and Frelimo earlier this year, putting a formal end to decades of hostility between two groups that fought on opposite sides of a civil war that ended in 1992.

Renamo, after a meeting of its top officials on Monday in Maputo said it had decided to challenge the results over allegations of registration irregularities, phantom voters and the intimidation of activists and candidates by security forces.

"The above-mentioned facts ... reported here constitute predicted and punishable electoral offences under the law, as well as a denial of the most elementary principles of democracy and human rights," said Renamo president Momade.

"We urge all Mozambicans not to accept this mega electoral fraud."

The Frelimo party and the Electoral Administration Technical Secretariat (STAE) did not respond to phone calls and text messages from Reuters requesting comment.

Activists and observers have also questioned the fairness of last Tuesday's vote while observer missions from the European Union and United States have raised concerns.

The campaign was marked by violence, including the murder of an election observer. The Centre for Public Integrity in Mozambique also said the head of Renamo's Women's League and her husband were murdered in the province of Tete.

Victory for Renamo in a number of provinces is seen as central to the survival of the peace pact. But early data suggests Renamo has already lost some of them.

According to electoral commission data, Frelimo had clinched nearly 80% of the vote compared to Renamo's 17% in Tete province. In nearby Sofala, site of Renamo's headquarters, the opposition had only 20% versus Frelimo's nearly 66% of votes.

Renamo hoped to win control of such provinces to satisfy a long-thwarted demand for influence: for the first time after the election, provincial governors will be appointed by the majority party in each province rather than by the government.

(Reporting by Manuel Mucari in Maputo and Emma Rumney in Johannesburg; Additional reporting by Mfuneko Toyana; editing by Grant McCool)