Only 1 in 5 adults want Rosenstein to leave: Reuters/Ipsos poll 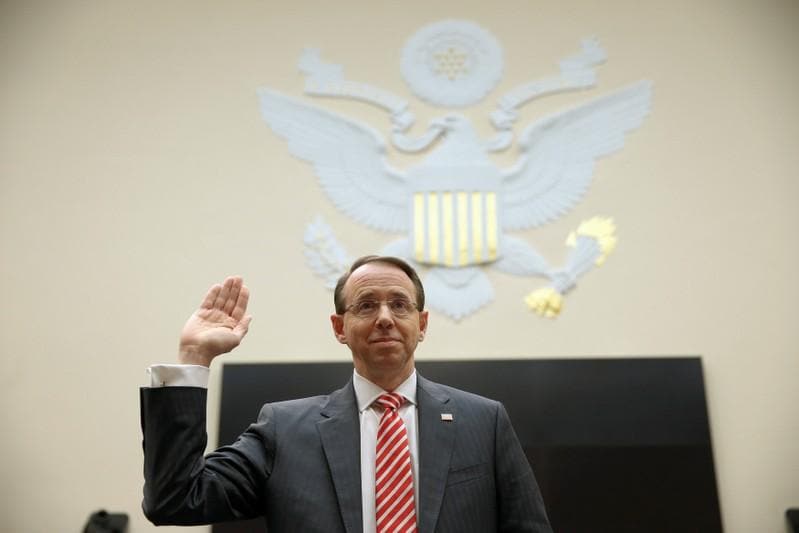 Those wanting U.S. Deputy Attorney General Rod Rosenstein to stay outnumber those who want him out by a margin of almost two-to-one.

The Sept. 25-26 poll, released on Wednesday, found that 42 percent of adults agree that Rosenstein should "keep his job."

Rosenstein has been in Trump's crosshairs ever since he appointed former FBI Director Robert Mueller to investigate Russian interference in the 2016 presidential election. The probe, which Trump has frequently labelled a "witch hunt," has resulted in more than 30 indictments and six guilty pleas so far.

On Monday, some news organizations reported Rosenstein was out of the job after a report in the New York Times had said he suggested secretly recording Trump. That was not the case, but Trump later said that he had not decided what to do about Rosenstein.

Rosenstein is expected to meet on Thursday with Trump to discuss his future at the Justice Department. It is unclear who would take over as Mueller's supervisor if Rosenstein leaves.

If Mueller "were to be terminated or resign," 51 percent said an independent investigation should continue, while 24 percent said it should not.

The Reuters/Ipsos poll was conducted online, in English, throughout the United States. It gathered responses from 1,187 adults, including 441 Democrats and 383 Republicans. The poll has a credibility interval, a measure of precision, of about 3 percentage points.