Once an outcast, Ukrainian Patriarch ready to lead church split from Russia

By Matthias Williams and Pavel Polityuk KIEV (Reuters) - Patriarch Filaret was defrocked and excommunicated by the Russian Orthodox church, and accused by his opponents of being a KGB agent, having a secret family and embezzling money. But more than a quarter of a century after he led a split of the Ukrainian church from its Russian parent following the Soviet Union's collapse, Filaret, now 89, is close to achieving his dream of an independent national church. And he is ready to lead it. 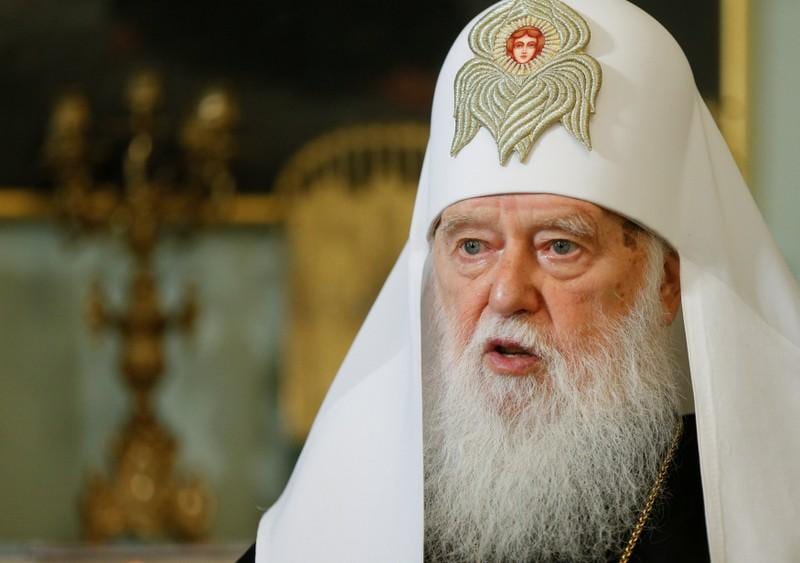 By Matthias Williams and Pavel Polityuk

KIEV (Reuters) - Patriarch Filaret was defrocked and excommunicated by the Russian Orthodox church, and accused by his opponents of being a KGB agent, having a secret family and embezzling money.

But more than a quarter of a century after he led a split of the Ukrainian church from its Russian parent following the Soviet Union's collapse, Filaret, now 89, is close to achieving his dream of an independent national church. And he is ready to lead it.

Divisions between rival Orthodox factions have sharpened in Ukraine since Russia's annexation of Crimea in 2014 and the outbreak of a Kremlin-backed separatist insurgency in the eastern Donbass region.

For President Petro Poroshenko, establishing an independent church is a way of blunting Moscow's influence in Ukraine. If he pulls it off, it would also likely boost his chances in a tight re-election race next March.

For that to happen, Ukraine needs the formal backing of the Ecumenical Patriarch in Turkey, the global spiritual head of Orthodox Christians.

Filaret said Ukraine could be weeks away from achieving its goal despite fierce opposition from Moscow, and that a synod in Istanbul would approve autocephaly latest by the end of this year. The Russian Orthodox Church has already protested by breaking off ties with Istanbul in September.

"I do not see any obstacles to getting the Tomos," Filaret told Reuters, referring to the formal announcement that would grant the Ukrainian church "autocephaly", or independence.

It would mark the end of a strange journey for Filaret, who was once a frontrunner to head the Russian Orthodox Church but switched tack to campaign for an independent Ukrainian church as the country won independence from Moscow.

His branch initially struggled for recognition but has grown in strength and enjoyed the support of successive presidents. He denies allegations of impropriety or working as a secret agent for the KGB, though he said under the Soviet system the clergy was forced to have contacts with the secret police.

Not shy of wading into politics, he threw his support behind "Orange Revolution" protesters in 2004 against Russia's choice of president, Viktor Yanukovich.

During the Maidan street protests that eventually toppled Yanukovich in 2014, his church offered shelter to injured demonstrators. He says Ukraine's place was in Europe, not under President Vladimir Putin's Russia, and has urged the West to keep sanctions on Russia.

"Putin wants to return to the past, to the period when empires existed," Filaret said in an interview.

The separatist conflict has heightened tensions between a church aligned with Russian Orthodoxy -- widely referred to in Ukraine as the Moscow Patriarchate -- against Filaret's breakaway rival called the Kiev Patriarchate.

Critics of the Moscow Patriarchate call it a fifth column for the Kremlin, used to harbour separatist fighters, store weapons, justify Russian expansionism and spread anti-Ukrainian propaganda. Critics of Filaret call him illegitimate.

It has led to violent clashes between supporters of the rival factions over church property.

Vladimir Legoida, a spokesman for the Moscow Patriarchate, said one of its churches had been forcibly seized by "schismatic organizations" on Friday in western Ukraine, and accused Kiev's leaders of unnecessary meddling.

"Ukraine's political forces are guided by political ambitions and are trying to somehow change the current political situation, including the president's low rating," he said at a news conference in Moscow on Friday.

Despite his advanced years, Filaret says he is fit enough to lead the new autocephalous church if chosen, something he puts down to a moderate diet and looking after his health.

But the Moscow Patriarchate says there can be no compromise with Filaret in charge, and its supporters have warned of bloodshed if Ukraine completes its break from Russia.

"There will be provocations and we anticipate them, but we will do everything according to the law, voluntarily and without any violence."

Poroshenko is widely expected to run for a second term next year, and Filaret credits the president's diplomatic efforts as part of God's plan to give Ukraine an independent church. He also thinks it will give Poroshenko a boost at the polls.

"Whether he wants to go for a second term or he doesn't, but the fact that his authority will rise in Ukraine is without a doubt," Filaret said.