By Rafael Marchante, Catarina Demony and Miguel Pereira CANICO, Portugal (Reuters) - In a show of solidarity, the foreign ministers of Germany and Portugal laid two wreaths near the site where 29 German tourists died on Wednesday after their bus overturned on the Portuguese island of Madeira. 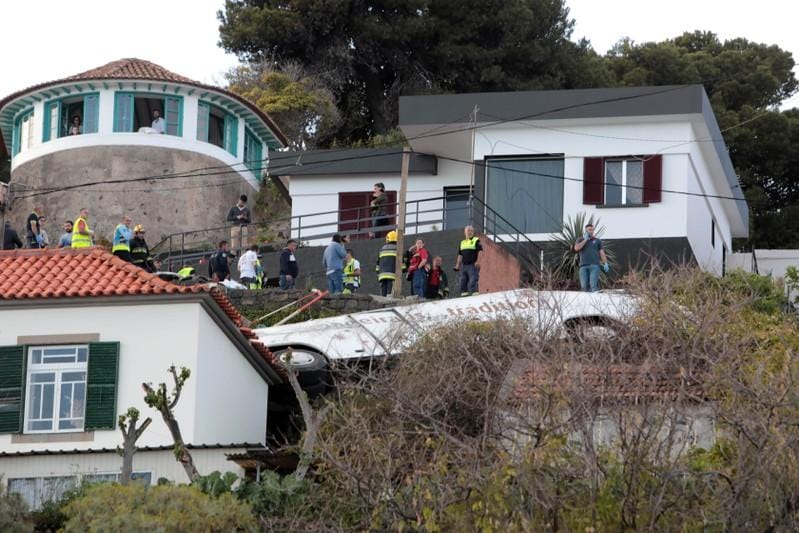 CANICO, Portugal (Reuters) - In a show of solidarity, the foreign ministers of Germany and Portugal laid two wreaths near the site where 29 German tourists died on Wednesday after their bus overturned on the Portuguese island of Madeira.

The bus - carrying 55 tourists, a guide and a driver - veered off a steep road in the coastal town of Canico, near Madeira's capital city, Funchal, and came to a halt next to a house, which was damaged in the crash, authorities said.

Portugal's public prosecutor's office opened an investigation into the accident, the cause of which authorities said they could not yet determine. Local TV channel SIC attributed it to either brake failure or a problem with the accelerator cable.

Heiko Maas, Germany's foreign minister, landed in Madeira on Thursday evening with a team of doctors, psychologists and consular officials to meet those affected and thank Portugal for its help.

As soon as he touched down, the minister and his team headed to the scene of the crash, where he paid tribute to the victims and, alongside his Portuguese counterpart, held a minute of silence.

Shocked residents also laid flowers by the road where the accident took place.

"This is a terrible event," Maas told reporters during his visit to the site. "We can't just stay in Germany watching and celebrating Easter."

Maas then visited Funchal's hospital, where 28 people were treated for head, abdominal, chest and other injuries, a hospital spokesman said on Thursday morning.

A statement released on Thursday evening by Madeira's regional health service confirmed that 17 of the 28 injured remained in hospital and that 10 people were already discharged.

None of those injured are currently in a life-threatening condition, Portugal's foreign minister, Augusto Santos Silva, told reporters after he arrived in Madeira on Thursday afternoon.

"We are working flat-out to bring people who are injured and capable of being transported, to identify those who have died and to inform their families." Maas said. "It is very difficult work."

MANY VICTIMS WERE RETIREES

Authorities on the island confirmed all 29 people killed were German. Madeira's regional health service said 17 were women and 12 were men. Many were retirees, said Germany's best-selling daily, Bild.

The 29 victims were members of a bigger holiday group, other members of which were travelling on another bus, a regional civil protection spokesman said.

Two of the injured were Portuguese and the rest were foreign nationals, a hospital spokesman said. Santos Silva confirmed the two Portuguese citizens were the driver and the tour guide.

Images taken by Reuters photographers on Thursday showed the bulk of the wreckage had been removed, leaving some debris still scattered on the ground.

Tributes poured in and three days of mourning were declared in Portugal on Thursday in honour of the victims of the bus crash.

"I have no words to describe what happened. I cannot face the suffering of these people," Canico Mayor Filipe Sousa told SIC TV.

(Reporting by Rafael Marchante and Miguel Pereira in Canico and Catarina Demony in Lisbon; Additional reporting by Thomas Escritt and Madeline Chambers in Berlin; Editing by John Stonestreet and Peter Cooney)