Off-duty cops, other officials face reckoning after rallying for Trump in D.C

By Linda So, Andrea Januta and Mike Berens (Reuters) - As rioters scaled scaffolding outside the U.S. Capitol, Roxanne Mathai held up her cell phone to record the sea of supporters of President Donald Trump storming America’s bastion of democracy. 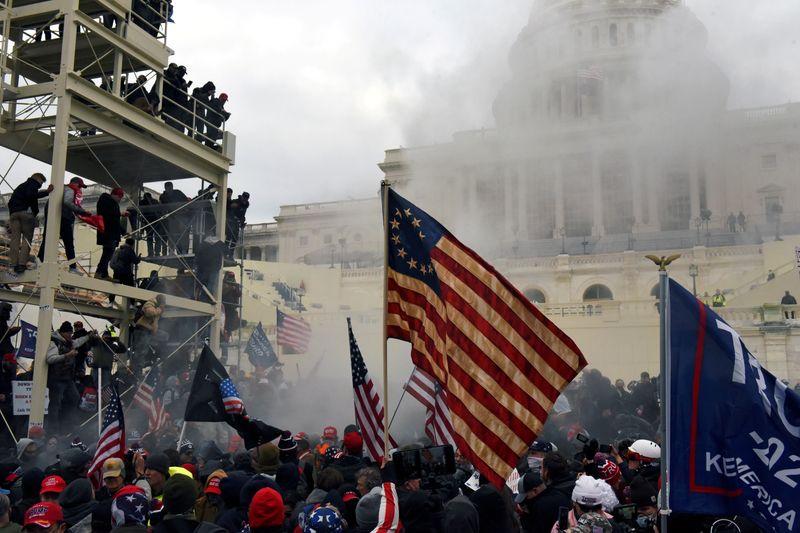 By Linda So, Andrea Januta and Mike Berens

(Reuters) - As rioters scaled scaffolding outside the U.S. Capitol, Roxanne Mathai held up her cell phone to record the sea of supporters of President Donald Trump storming America’s bastion of democracy.

Mathai, a jail lieutenant and 8-year veteran of the Bexar County Sheriff’s Office, approached the Capitol steps last Wednesday as rioters in front of her breached barricades.

Wearing a red, white and blue face mask with a Trump flag hanging from her back, she posed for selfies. “Not gonna lie,” said the mother of three on her Facebook page, “aside from my kids, this was, indeed, the best day of my life.”

The next morning, her boss reported her to the Federal Bureau of Investigation, which was seeking information on any participants in the Jan. 6 insurrection that left five people dead, including a Capitol police officer. Bexar County Sheriff Javier Salazar said Mathai also was placed on unpaid leave pending results of a separate investigation into her involvement.

“I was oblivious to everything,” including the violence, Mathai told Reuters on Tuesday. “I was watching everything as a spectator.” She said she was bound by a confidentiality order that prohibited further comment.

From off-duty police to firefighters, state lawmakers, teachers, municipal workers and at least one active-duty military officer, dozens of public servants from across the United States joined the protests in Washington that turned into a siege on the U.S. Capitol. The mob’s violent effort aimed to block Congress’ certification of Joe Biden’s election as president.

Since returning home, many have confronted harsh criticism from angry constituents or employers - often because of their own posts on social media.

At least 50 elected officials and others in public sector jobs are facing internal inquiries or investigations that, in some cases, have resulted in temporary suspensions pending investigations, based on a Reuters examination of public statements, news reports and video footage.

At least two Capitol police officers have been suspended and more than a dozen others are under investigation for alleged dereliction of duty or aiding or abetting rioters.

For some public employees caught on video rioting inside the Capitol, the consequences have been swift, including arrests and job termination. Many others, whether inside or outside the building, face a mix of hard scrutiny, investigations, job suspensions and public outcry. Their employers are grappling with whether they violated policies, whether they should be censured or fired and whether their free speech rights were superseded by their duty to serve the public good.

Some of those who faced backlash did not attend the Washington, D.C., rally where Trump gave an hour-long speech reiterating his baseless claims of voter fraud - but they did offer public support. Some said they were exercising their right to free speech and assembly under the U.S. Constitution.

“You don’t get to throw a trash can through a store window because that store window was along a demonstration path,” he added.

“On social media in particular, it can be muddy on what constitutes official capacity,” he said.

For members of the military, First Amendment rights can be restricted more than for civilians.

Public backlash can be harsh for anyone who attended the rally.

For instance, two Pennsylvania teachers, one from Allentown and the other from the Susquehanna Township, posted images from the rally on social media. Reuters found no evidence that they entered the Capitol building or its surrounding grounds, or were engaged in other unlawful activity.

Both have been placed under investigation, according to local news reports and statements from the school districts where they work, and the Allentown teacher has been suspended.

The Allentown teacher could not be reached for comment, and the Susquehanna Township teacher said he was unavailable on Wednesday.

Both school districts emphasized their staffers’ First Amendment rights in the formal statements.

“It is important to understand that as a governmental employer the school district must abide by all of the provisions of the U.S. Constitution,” the Susquehanna Township School District wrote on Facebook.

The post gathered hundreds of comments, many from angry community members. An online petition to fire the teacher has gathered more than 5,600 signatures.

In response, the township’s superintendent, Dr. Tamara Willis, released a video statement more sympathetic to petitioners. “Our initial statement appeared to ignore the deeply divisive nature of the personnel matter,” she said. “However, I assure you that it was in no way designed to ignore the gravity of the events that occurred.”

Questions about the role of public servants in fanning or organizing the unrest extend into Congress and state legislatures.

Virginia State Delegate Derrick Evans, a Republican, donned a helmet and posted online a video of himself among a mob of people streaming into the Capitol. “We’re in it! Keep it moving, baby!” Evans said in front of a doorway amid rioters grimacing from pepper spray.

Federal prosecutors have charged Evans with violent entry and disorderly conduct, among other things. On Saturday, Evans resigned his seat. He did not respond to a request for comment.

In a public statement Thursday, Evans’s lawyer said he “did nothing wrong” and was exercising First Amendment rights.

Julian Zelizer, a political historian at Princeton University, said the public reaction to officials’ participation is to be expected.

“If they’re involved in an activity like this, you can’t be surprised if many [people] just don’t trust them anymore,” he said. “It undermines that you can count on them with total confidence to serve the public.”

Some elected officials this week have voiced suspicions of secret insider help by their colleagues. Others have accused lawmakers of sending call-to-action messages.

U.S. Representative Jody Hice, a Republican from North Carolina, tweeted in the hours before vote certification: “What is done today will be remembered! This is our 1776 moment,” referring to the year the United States declared independence from Britain during the Revolutionary War.

That sentiment was echoed by Lauren Boebert, a Republican Representative from Colorado, who tweeted before the siege of the Capitol, “Today is 1776.”

Hice, who could not be reached for comment, told local media that he was not inciting violence but rather standing up for free elections.

Boebert, who wears a pistol on her hip in campaign photos, criticized Democrats after facing calls to resign. “They act as though a reference to the founding of our country and the bravery of upholding our Constitutional oath is criminal,” she said in a statement.

'WE’RE NOT SHUTTING UP’

The U.S. military and a growing number of law enforcement agencies across the country from states including New Hampshire, Pennsylvania and Washington are scrutinizing staff for their potential involvement in last week’s melee.

A Zelienople, Pennsylvania, police officer photographed wearing a “MAGA 2020 F--- your Feelings” hat is under investigation after attending the Jan. 6 rally where Trump urged his followers to march to the Capitol and “fight.”

Police Chief Jim Miller said there’s no indication Officer Thomas Goldie participated in the march or went inside the Capitol, but he has nonetheless referred the matter to the borough’s legal department for investigation.

“You can’t stop someone from expressing their rights,” Chief Miller told Reuters, but he said he wanted to hear from the lawyers. He said he won’t consider disciplinary action against the officer until he does.

Officer Goldie did not respond to requests for comment.

Officials in Troy, New Hampshire, have locked the doors to their town hall after receiving threats from people angry that the town’s police chief, David Ellis attended the pro-Trump rally.

Chief Ellis did not respond to requests for comment.

Dick Thackston, chairman of the Troy Board of Selectmen, defended the chief against calls for his resignation and expects Ellis to return to his job soon. He stressed the importance of the First Amendment.

“It would be a scary day in America if you have to tell your employer what meetings and political events you are going to on your personal time,” he said.

The U.S. Army is investigating a psychological operations officer who led scores of protesters from North Carolina to the Washington rally, according to media reports and a Facebook post.

Commanders at Fort Bragg said they were reviewing Capt. Emily Rainey’s involvement in last week’s protests and if she violated any laws or regulations.

“The DoD (U.S. Department of Defense) encourages members of the Armed Forces to carry out the obligation of citizenship, so long as their actions are in keeping with DoD policy and do not impair the good order and discipline of the service,” said Maj. Dan Lessard, spokesperson for 1st Special Forces Command (Airborne) at Fort Bragg.

Rainey, who did not respond to requests for comment, had already submitted her resignation last October and was due to leave the Army in April. She posted a video on her Facebook page two days after the deadly Capitol riot urging people to “start fighting.”

“Get off the bench,” said Rainey, looking straight into the camera. “We aren’t going anywhere. We’re not shutting up.”