By Paul Carsten and Alexis Akwagyiram ABUJA (Reuters) - As many as 39 people were killed in election violence so far in Nigeria, civil society groups said on Sunday, as the country awaits the results of voting in what is forecast to be its tightest election since the end of military rule in 1999. The number of deaths reported by Sunday was below the final death tolls in previous elections in Africa's most populous country, but in the past most unrest has taken place after results were announced. 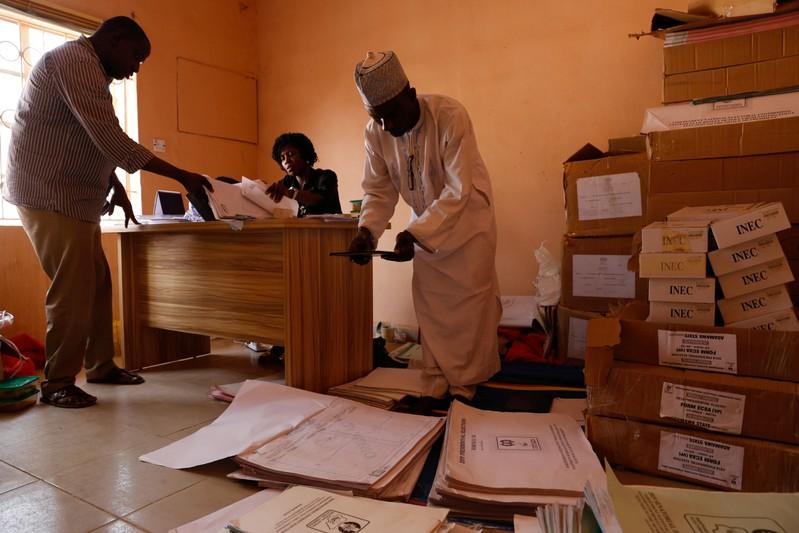 By Paul Carsten and Alexis Akwagyiram

ABUJA (Reuters) - As many as 39 people were killed in election violence so far in Nigeria, civil society groups said on Sunday, as the country awaits the results of voting in what is forecast to be its tightest election since the end of military rule in 1999.

The number of deaths reported by Sunday was below the final death tolls in previous elections in Africa's most populous country, but in the past most unrest has taken place after results were announced. Voting took place on Saturday, with some polling stations staying open on Sunday and results not expected for several more days.

A credible and relatively calm poll would open a new chapter in the chequered political history of Nigeria, where nearly six decades of independence have been tarnished by military coups, endemic corruption and secessionist movements.

The death toll during and after the last election in 2015 was around 100 people, according to the International Crisis Group. Four years before that, in the religiously mixed northern city of Kaduna, 800 people were killed in election violence.

A spreadsheet provided by SBM Intelligence showed that in one incident, seven people were killed in a shoot-out between Nigerian army troops and a gang in Abonnema, around 14 km (9 miles) west of the main oil industry city of Port Harcourt in the oil hub of Rivers state.

A lieutenant was killed and six gunmen died in the firefight, which broke out when the attackers barricaded a major road into the town and laid an ambush on the troops, the acting director of army public relations, Colonel Sagir Musa, said.

Abdulmajid Ali, Deputy Inspector General of Police said the highest number of instances where there was reported violence were in Rivers and Akwa Ibom states, both in the south.

"We are still collating the incidents that happened. We received a lot of reports and are investigating," he said.

Mahmood Yakubu, chairman of the Independent National Electoral Commission (INEC), told election observers and reporters that an electoral official had been shot dead by unknown people in Rivers state.

The president's office declined to comment on the violence, while Atiku said in a statement that "no politician's ambition is worth the blood of any innocent Nigerian".

Buhari, 76, a former military ruler who is seeking a second term on an anti-corruption platform, faces Atiku, 72, a former vice president who has promised to expand the role of the private sector.

The election was postponed the previous Saturday just hours before it was due to begin, with the authorities citing logistics. Seventy-three million eligible voters chose from a pool of more than 70 presidential candidates, although only those from the two main parties are seen as having a chance.

"Everything is going on well with the count," said Festus Okoye, an election commission official. "From Tuesday onwards we should have a substantial number of results."

Buhari's northern Kano state stronghold was one of the key battlegrounds in the closely-fought election.

"It will be bitter if Atiku wins but we will have to accept it," Ali Adamu, 50, a driver in Kano said.

Henry Okalome, 55, a trader in Kano who voted for Atiku said: "We didn't expect that the election would be so smooth ... we thought people might be dying."

The contest between Buhari and Atiku hinges on revamping an economy struggling to recover from its first recession in 25 years, which it slipped into in 2016 and emerged from in 2017.

Nearly a quarter of the workforce is unemployed, while the cost of living has also risen rapidly.

Buhari has focused his campaign on rooting out corruption, but critics say there have not been any significant convictions in his first term. Atiku has said he would aim to double the size of the economy to $900 billion by 2025.