Early in 2011, Hillary Clinton addressed iron words to Afghanistan’s Taliban leadership at a convention in New York, telling the men who enabled 9/11 exactly what they needed to do to bring “an end to the military actions that are targeting their leadership and decimating their ranks.” “They must renounce violence,” the former United States secretary of state said. “They must abandon their alliance with al-Qaeda; and they must abide by the constitution of Afghanistan.”

Inside of days, the United States is scheduled to begin talks with Taliban envoys at their newly-inaugurated political office in Doha—an office flying the flag of the Islamic Emirate of Afghanistan, destroyed by American bombs after 9/11.

Heading into 2014, when almost all western troops will pull out of Afghanistan, it's turning out that America’s Red Lines on terror were drawn with vanishing ink. From 1 January to 6 June, civilian casualties are up 24 percent compared with the same period last year, three-quarters inflicted by the Taliban and its partners. The Taliban has refused to reject al-Qaeda. Its leaders refuse to sit across the table with representatives of Afghanistan’s elected government. 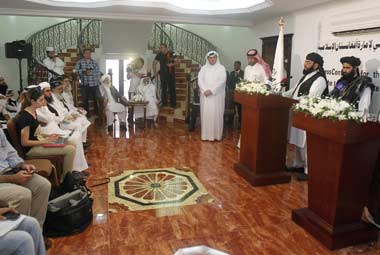 Taliban leaders at the inauguration of the Taliban political office in Doha. Reuters

New Delhi needs to start worrying, and soon: the Taliban’s march back into office will have lethal consequences not just for Afghans, but India and the region.

Late last year, Afghanistan’s High Peace Council, set up to negotiate peace with the Taliban, drew up a five-stage plan for peace talks. Formal negotiations with the Taliban, scheduled in the plan for mid-2013, are running bang on schedule—but only because key steps have been skipped. In return for its leadership being removed from the United Nations’ 9/11 sanctions list, for example, the Taliban was to announce it was “cutting its links with al-Qaeda.” Eighteen low-ranking Taliban released by Islamabad—a move meant to facilitate negotiations with the Afghan government—have remained on in Pakistan, without renouncing violence.

President Hamid Karzai, angered by the United States’ decision to talk to the Taliban regardless, has now called off negotiations on post-2014 security arrangements—but the truth is he has little power to shape events.

There’s a simple reason why the United States has continued to push for talks: President Barack Obama is desperate for any political deal that will dignify his 2014 retreat: peace, as it were, at any cost.

Key Taliban leaders like Mullah Muhammad Umar, Abdul Ghani Baradar, Abdul Ahad Jehangirwal and Nooruddin Turabi remain in Pakistan—and under the effective control of Pakistan’s Inter-Services Intelligence. The families of key Doha negotiators, including Taliban chief of mission Tayyab Agha, are also in Pakistan. The Taliban’s office in Doha is as much a Pakistani intelligence station as an Afghan political mission. Aga Jan Motasim—a former Taliban leader targeted for assassination in 2010 because of his participation in secret peace talks—recently made clear the Doha leadership was not among Taliban moderates willing to accept electoral democracy.

Islamabad has cashed in on Obama’s desperation, selling its leverage over the Taliban hardliners in return for equities in Afghanistan’s political future. It argues that the Taliban leadership, if given power in Kabul, will be able to buy off ground-level jihadists fighting alongside al-Qaeda and its sister organisations.

The Taliban leadership, it hopes, will return the favour by using its influence with jihadists fighting against the Pakistani state, like al-Qaeda and the Tehreek-e-Taliban Pakistan.

Few experts believe things will work to the script Pakistan is marketing: key Taliban affiliates like Jalaluddin Haqqani’s networks are deeply entwined with al-Qaeda and the TTP, the scholars Dan Rassler and Vahid Brown have shown.

Early on 27 September 1996, Muhammad Najibullah Ahmadzai was dragged out of the United Nations compound in Kabul, where he had taken sanctuary. The former Afghan president was beaten, then castrated; his bloodied body was dragged behind a truck before being hung on a traffic light for public display.

President Najibullah’s last minutes were the first of the life of Afghanistan’s Islamic Emirate. His fate tells us why President Obama’s initiative is doomed to fail.

From 1994, the United States threw its weight behind oil giant Unocal’s efforts to build a pipeline linking central Asia’s vast energy fields with the Indian Ocean. In April 1996, Robin Raphel—then assistant secretary of state for south Asia, and now President Barack Obama’s ambassador for non-military aid to Pakistan—visited Kabul to lobby for the project. Later that year, she was again in Kabul, calling on the international community to “engage the Taliban.”

Glyn Davies, the State Department’s spokesperson, described Najibullah’s killing as “regrettable”. Yet, he said, the United States hoped the new Islamic Emirate would “form a representative interim government that can begin the process of reconciliation nationwide”.
Raphael had these words in response: “The Taliban do not seek to export Islam, only to liberate Afghanistan.”

In a 1998 report, Physicians for Human Rights documented the Islamic Emirate’s war against Afghanistan’s women: the closing down of schools, the denial of medical care facilities, public floggings and institutionalised child-rape. It recorded that men faced “extortion, arrest, gang rape, and abuse in detention because of their ethnicity or presumed political views.”

Kabul’s new rulers, the commentator and scholar Ishtiaq Ahmad has noted, “expressed their taqwa (piety) by bringing down the Buddha statues in Bamiyan, summary executions and destruction of girls’ schools.”

The United States responded with silence—both to the Taliban’s crimes against its own people, and its role in Osama bin Laden’s violent rise.

Even though the Islamic Emirate of Afghanistan sheltered bin Laden, it was never declared a state sponsor of terrorism. In 1996, a State Department report had described bin Laden as one of the “most significant sponsors of terrorism today”. “Madeline Albright, [her] undersecretary Tom Pickering and regional specialists in state’s south Asia bureau,” records Steve Coll in his magisterial work Ghost Wars, “all recommended that the administration continue its policy of diplomatic engagement with the Taliban. They would use pressure and promises of future aid to persuade [Mullah Muhammad] Omar to break with bin Laden.”

“The truth,” Albright would later argue, “was that those [attacks before 9/11] were happening overseas and while there were Americans who died, there were not thousands and it did not happen on US soil.”

Libya, Iraq, South Yemen, and Syria, all secular states, hadn’t killed “thousands” or “on US soil”—but that didn’t stop the United States from designating them sponsors of terrorism.

The truth was also that the United States saw Sunni jihadists in Afghanistan, along with nuclear-armed Pakistan, as allies against a resurgent Iran.

Ever since 26/11, Pakistan has reined in jihadist groups operating against India, fearful of military retaliation and international sanctions. Now, though, as the ISI seeks to deflect jihadist energies away from Pakistan, India is again becoming a target. Threats from al-Qaeda have multiplied: in a recent video, al-Qaeda cleric Asim Umar called on Indians Muslims to battle for shari’a rule; last year, al- Qaeda’s Ahmad Farooq vowed “to hasten our advance towards Delhi.”

Doha-based Islamist cleric Yusuf al-Qaradawi—a key influence on the Taliban, and behind the scenes player in the talks—has hailed the jihadist struggle to create an Islamic state in Kashmir.

For all practical purposes, the talks in Doha will hand Pakistan and its jihadist proxies the keys to Afghanistan’s future—a decision that could impose enormous costs on India.

New Delhi will have to resume serious dialogue on military assistance with the Northern Alliance, which battled the Taliban until 9/11. It will have to think seriously on the use of offensive covert means to target the jihadist leadership in Pakistan. New Delhi will also have stop dragging its feet on requests for military assistance from Afghanistan, made by Karzai last month.

“I think the time has come for India to revitalise its relationship with its historic friends, who resisted Pakistani expansionism in Afghanistan before 9/11,” former Afghan intelligence chief Amrullah Saleh told Firstpost. “The moment of decision is inching closer.”