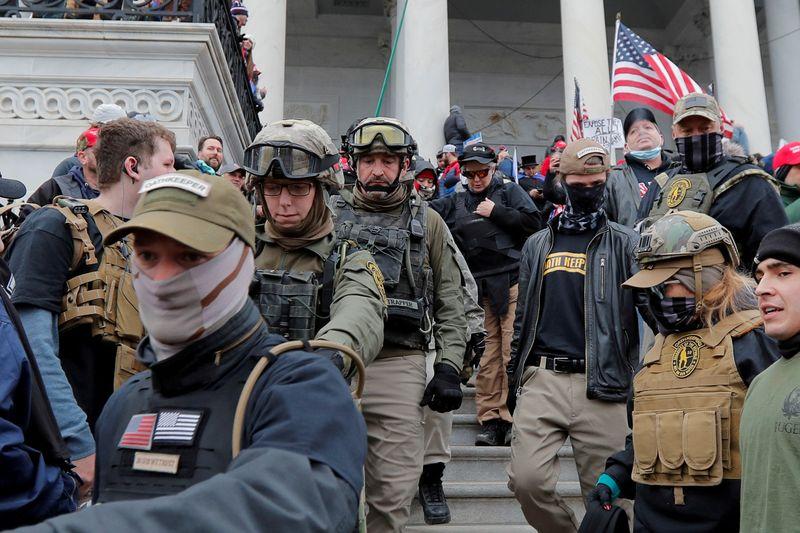 Trump is on trial this week in the U.S. Senate, charged with inciting an insurrection by exhorting thousands of supporters to march on the Capitol that day while Congress gathered to certify Democrat Joe Biden's election win.

In a 21-page court filing, prosecutors offered more details than previously known about the alleged planning, training and coordination that some members of the Oath Keepers undertook after Trump lost the November election.

In it, they ask a federal judge to detain Jessica Watkins, whom they describe as the leader of an Ohio-based militia tied to the Oath Keepers, saying she harbors extreme views that the Biden presidency poses an "existential threat" and actively recruited people to participate in a coup.

Prosecutors quote her on Nov. 17, days following the election as telling a recruit that if Biden was president, then "our Republic would be over. Then it is our duty as Americans to fight, kill and die for our rights.”

More than 200 people have been charged in connection with the riots, which left five people dead, delayed Congress from certifying Biden's victory, and forced members of Congress to scramble to safety.

Thursday's detention memo for Watkins suggests that some of Trump's most fervent supporters believed he sought to signal them into action.

In the memo, prosecutors say Watkins exchanged texts with another co-defendant and other unidentified contacts about coordinating a "quick reaction force" (QRF) which would be there as back-up with guns if needed on Jan. 6.

“(W)e can have mace, tasers, or night sticks. QRF staged, armed, with our weapons, outside the city,” she wrote, noting the armed team would be "outside DC with guns, await ... orders to enter DC under permission from Trump."

Watkins is imprisoned awaiting trial, has yet to enter a plea and could not be reached for comment. The court docket does not list a lawyer for her.

FBI investigations have focused on members of far-right extremist groups who may have plotted to take over the Capitol and stop the election certification process.

Last month a grand jury indicted Watkins and two other alleged Oath Keepers, Thomas Caldwell and Donovan Crowl, saying they engaged in extensive recruitment and training in the lead-up to Jan. 6.

Caldwell has since denied being a member of the Oath Keepers or that he was inside the building that day, and he is seeking to be released from jail.

Crowl has yet to enter a plea or responded, and no lawyer is listed for him as yet in the court docket.