By Ulf Laessing CAIRO (Reuters) - The United Nations has received 'numerous' reports of looting and destruction in two towns outside Tripoli retaken by the forces of Libya's internationally recognised government, it said on Sunday. 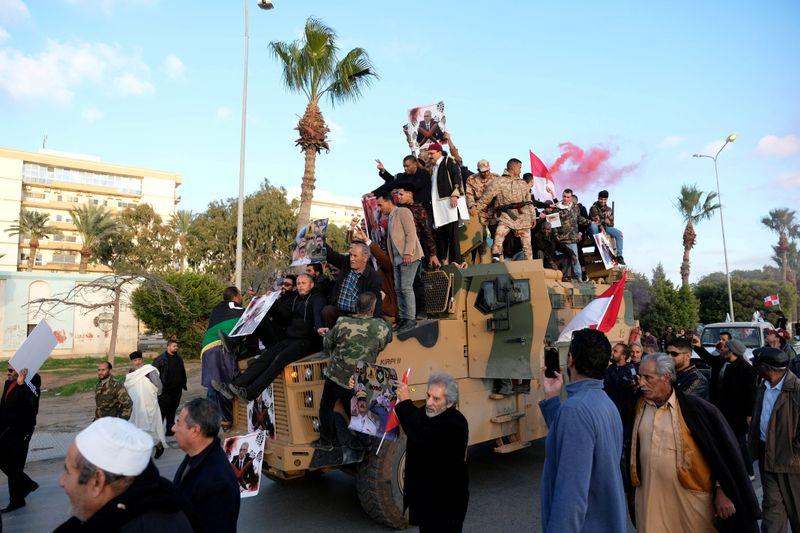 CAIRO (Reuters) - The United Nations has received "numerous" reports of looting and destruction in two towns outside Tripoli retaken by the forces of Libya's internationally recognised government, it said on Sunday.

Forces of the Turkish-backed Government of National Accord (GNA) on Thursday recaptured Tarhouna as part of an advance ending a 14-month offensive on the capital by the eastern-based Libyan National Army (LNA) of Khalifa Haftar.

Since the LNA -- backed by Egypt, the United Arab Emirates and Russia -- retreated, videos have been posted online purportedly showing looting of shops and torching of homes of families associated with the LNA and its local backers.

The U.N. Libya mission (UNSMIL) said more than 16,000 people had been displaced in Tarhouna and southern Tripoli.

"Reports of the discovery of a number of corpses at the hospital in Tarhouna are deeply disturbing," UNSMIL said in a statement, urging the GNA to investigate impartially.

"We have also received numerous reports of the looting and destruction of public and private property in Tarhouna and Alasabaa, which in some cases appear to be acts of retribution and revenge that risk further fraying Libya's social fabric."

Alasabaa is another town south of Tripoli that was retaken by the GNA after changing hands several times. Tarhouna was a forward base for the LNA's Tripoli offensive.

A spokesman for the GNA interior ministry sent Reuters a statement warning its forces that reprisals in recaptured areas would be punished.

The Tripoli-based justice ministry said the GNA forces that entered Tarhouna had discovered more than 100 bodies in a morgue.

Jalel Harchaoui, research fellow at the Clingendael Institute, said international diplomatic efforts that had supported the Tripoli government "will be predicated on that government providing security, imposing order and promoting robust transitional justice".

Turkey said it hoped to expand its cooperation with the GNA with deals on energy and construction once the conflict is over.

"From roads to bridges, hospitals, hotels, housing, we already have a history. These stopped because of the war. The same goes for energy," presidential spokesman Ibrahim Kalin told the Milliyet daily.