By Amanda Ferguson BELFAST (Reuters) - The Northern Irish party propping up British Prime Minister Theresa May's government launched fresh attacks on her Brexit withdrawal deal on Saturday, saying it would leave Britain in a 'pitiful' place and a Labour government might be preferable. 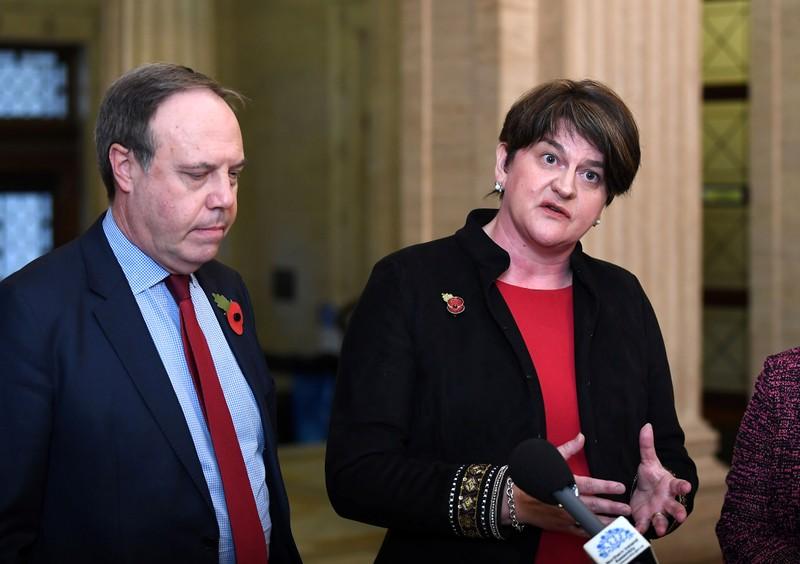 BELFAST (Reuters) - The Northern Irish party propping up British Prime Minister Theresa May's government launched fresh attacks on her Brexit withdrawal deal on Saturday, saying it would leave Britain in a "pitiful" place and a Labour government might be preferable.

At its annual conference, the Democratic Unionist Party (DUP) rallied its supporters to oppose May's deal and gave a standing ovation to key May rival Boris Johnson. He called for the government to prepare for a possible no-deal Brexit.

"In the coming weeks parliament will be faced with a clear choice on the future of our country: To be a free independent trading nation leaving the EU as one United Kingdom or to be

"The published Withdrawal Agreement portrays a pitiful and pathetic place for the United Kingdom," he said.

The rhetoric highlighted the challenge May faces to try to convince the DUP and rebels in her Conservative Party to support the deal or at least abstain in a parliamentary vote on the withdrawal deal.

May's divorce treaty and accompanying political declaration were due to be endorsed in Brussels on Sunday by May and the other 27 EU leaders.

But she is likely to need to convince dozens of parliamentarians to change their mind if she is to get the deal ratified in the British parliament.

The DUP, whose 10 members of parliament agreed to a 'confidence and supply' deal last year to back her minority government after a snap election, have repeatedly made clear they oppose May's compromise with the EU.

In an interview with The Times newspaper published on Saturday, DUP leader Arlene Foster suggested a government led by the Labour Party's Jeremy Corbyn - a longtime sympathiser with the DUP's arch rival Sinn Fein - might be preferable to the deal.

While a Corbyn government is "not a pleasant scenario," May's Brexit deal "is a real threat," she was quoted as saying.

The DUP fears the withdrawal treaty's 'backstop' provision could ultimately align Northern Ireland more closely with the EU than the rest of the United Kingdom if no other way can be found to avoid a hard border with the Republic of Ireland.

Foster's pro-British party fears the backstop provision, if implemented, could one day threaten the province's place in the UK altogether.

"Unless we junk this backstop, we will find that Brussels has got us exactly where they want us – a satellite state," Johnson told the crowd, taking up the same theme.

May has responded by telling her critics that Britain could face a hugely disruptive "no deal" Brexit if it does not take the deal on offer.

Several party members said they were fully behind the leadership's hardline stance on the withdrawal agreement, despite calls from business and farmers groups in recent days to accept it to avoid trade disruption.

"Theresa May is simply not taking on board.. with what the unionists in Northern Ireland think," said a 47-year-old solicitor and party member from Belfast, who declined to give his name. "What is happening to the union is more important than business opportunities."