North Korea calls for Pompeo to be dropped from talks; tests tactical weapon

By Joyce Lee and Hyonhee Shin SEOUL (Reuters) - North Korea said on Thursday it no longer wanted to deal with U.S. Secretary of State Mike Pompeo and that he should be replaced in talks by someone more mature, hours after it announced its first weapons test since nuclear talks broke down 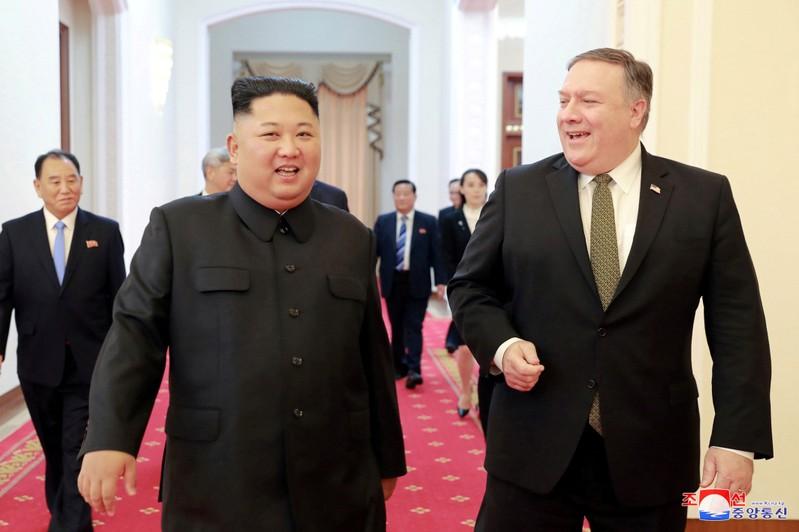 By Joyce Lee and Hyonhee Shin

SEOUL (Reuters) - North Korea said on Thursday it no longer wanted to deal with U.S. Secretary of State Mike Pompeo and that he should be replaced in talks by someone more mature, hours after it announced its first weapons test since nuclear talks broke down.

The North's official KCNA news agency quoted senior foreign ministry official Kwon Jong Gun as warning that no one could predict the situation on the Korean peninsula if the United States did not abandon the "root cause" that compelled North Korea to develop nuclear weapons.

The statement came shortly after North Korea said leader Kim Jong Un had overseen the testing of a new tactical guided weapon, which KCNA said had a "peculiar mode of guiding flight" and "a powerful warhead."

It was the North's first weapon test since talks in Vietnam between Kim and U.S. President Donald Trump in late February broke down over conflicting demands by North Korea for sanctions relief and by the United States for North Korea to abandon its nuclear programme.

Still, acting U.S. Defence Secretary Patrick Shanahan told reporters at the Pentagon that it was "not a ballistic missile," appearing to play down concerns.

At the same time, he noted: "There was a test."

KCNA gave no details on the weapon that was tested on Wednesday, but "tactical" implied a short-range weapon rather than the long-range ballistic missiles that have been seen as a threat to the United States.

KCNA quoted Kwon, who is in charge of U.S. affairs, as saying the Vietnam summit, the second between the two leaders, showed that talks could go wrong "whenever Pompeo pokes his nose in."

"I am afraid that, if Pompeo engages in the talks again, the table will be lousy once again and the talks will become entangled," Kwon said.

"Therefore, even in the case of possible resumption of the dialogue with the United States, I wish our dialogue counterpart would be not Pompeo but other person who is more careful and mature in communicating with us."

A spokeswoman for the State Department said it was aware of the report about Pompeo and added: "The United States remains ready to engage North Korea in a constructive negotiation."

Kwon did not elaborate on why North Korea felt compelled to develop nuclear weapons, but North Korea has long spoken of the need to defend itself from what it sees as U.S. aggression.

Kim said last week the breakdown in talks risked reviving tensions and he gave a year-end deadline for the United States to change its attitude.

Despite the failure of the Vietnam summit, Trump has stressed his good relationship with Kim.

Kwon also said the two leaders were on good terms, even as he castigated Pompeo for "fabricated" stories as part of a "publicity stunt." He did not elaborate.

Kwon said Pompeo had made "reckless remarks hurting the dignity of our supreme leadership," apparently referring to him agreeing to the characterisation of Kim as a "tyrant" at a U.S. congressional hearing last week.

Earlier, Kim Dong-yub, a military expert at Kyungnam University's Institute of Far Eastern Studies in Seoul, said the newly tested weapon was likely a short-range cruise missile that could be launched from the ground, sea and air.

Kim oversaw the test of an unidentified tactical weapon in November.

Experts said in November that Kim wanted to shift the mainstay of the North's conventional military power to high-tech weapons from a nearly 1.3 million-strong army.

The young leader said last April that he would stop nuclear tests and launches of intercontinental ballistic missiles because the nuclear capabilities of North Korea, which has tested nuclear devices six times, had been verified.

"This does serve as a useful reminder of one critical fact: Chairman Kim Jong Un never promised to stop testing all weapons in his military arsenal, just nuclear weapons and ICBMs that have the potential to hit the U.S. homeland," said Harry Kazianis of the Washington-based Centre for the National Interest.

South Korea's presidential Blue House declined to comment on the test, referring questions to the defence ministry. It said it was analysing the nature of the weapon and North Korea's intentions.

Kim's visit to the testing site came after he visited the North Korean Air and Anti-aircraft Force on Tuesday, according to KCNA.

Kyungnam University's Kim Dong-yub said the latest test appeared to partly be a message to the United States that North Korea would not bow to sanctions.

"It's also an internal message to the North Korean people and to the military" to instill trust in their own security by reinforcing conventional weapons, he said.

Satellite images from last week showed movement at Yongbyon, North Korea's main nuclear site, that could be associated with the reprocessing of radioactive material into bomb fuel, the Centre for Strategic and International Studies in the United States said on Tuesday.

U.S. national security adviser John Bolton said in a Bloomberg News interview on Wednesday the United States needed to see "a real indication from North Korea that they've made the strategic decision to give up nuclear weapons" before a third summit between Trump and Kim.