By Vladimir Soldatkin MOSCOW (Reuters) - A pipe-laying vessel has started work in Danish waters ahead of the resumption of construction of the Nord Stream 2 gas pipeline, the consortium behind the project said on Sunday, amid pressure from the United States and European Union to halt it. 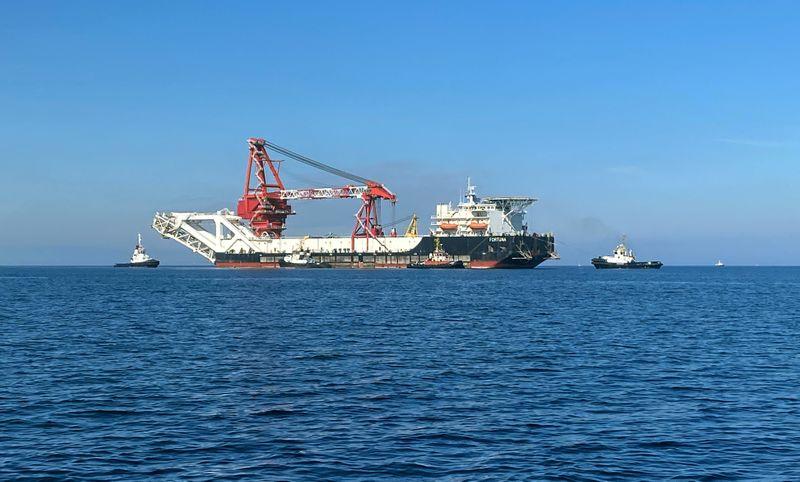 MOSCOW (Reuters) - A pipe-laying vessel has started work in Danish waters ahead of the resumption of construction of the Nord Stream 2 gas pipeline, the consortium behind the project said on Sunday, amid pressure from the United States and European Union to halt it.

The project, designed to boost Russian gas supplies to Europe and bypass Ukraine, has met resistance from Washington, which wants to sell its own sea-borne liquefied natural gas to the European Union and cut the region's reliance on energy supplies from Moscow.

European Union lawmakers passed a resolution on Thursday calling for the bloc to stop the completion of the Nord Stream 2 in response to the arrest of Kremlin critic Alexei Navalny.

The construction of the pipeline, which would double the capacity of the existing Nord Stream link from Russia to Germany, was suspended in December 2019 following a threat of sanctions from the United States and withdrawal of pipe-laying company, Allseas.

Last week the United States imposed sanctions against the pipe-laying vessel, Fortuna, and its owner, a firm called KVT-RUS, as the Trump administration sought to raise pressure on the project on its last full day in office.

Their assets are blocked and U.S. citizens are generally prohibited from dealing with them.

"All works are performed in line with relevant permits."

Nord Stream 2 cited a Danish Maritime Authority notice about resuming work on Jan. 15. The group had earlier said activities would include preparatory work and tests before pipe-laying started.

Work resumed for a brief period in last month on a 2.6-km (1.6-mile) stretch in German waters. A Danish regulator said construction would restart in Danish waters from mid-January, with Fortuna, which had worked in the German zone.

More than 90% of the project, led by Russian gas giant Gazprom, has been already completed.