No sign of end to standoff over Trump impeachment trial 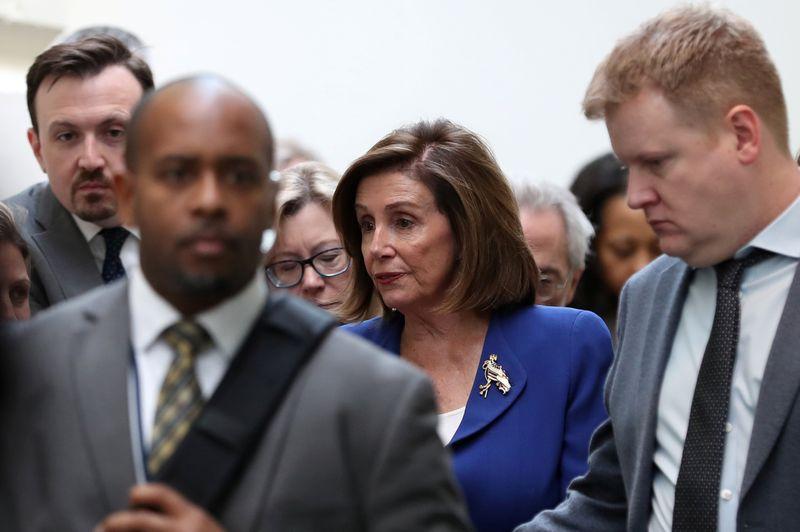 WASHINGTON (Reuters) - Senate Republican Majority Leader Mitch McConnell said on Wednesday there would be no haggling with the Democratic-led House of Representatives over the rules for U.S. President Donald Trump's impeachment trial.

With lawmakers' shifting their attention to the U.S.-Iran tensions, McConnell said he would not be pressured by House Speaker Nancy Pelosi, who has effectively delayed Trump's trial by refusing to send the Senate the two articles of impeachment approved by the House last month.

"There will be no haggling with the House over Senate procedure. We will not cede our authority to try this impeachment," McConnell said on the Senate floor a day after he announced he had enough Republican votes to start the trial without agreeing to Democrats' demands for the introduction of new witness testimony and documentary evidence.

McConnell, who has pledged to coordinate the trial with the White House, accused Pelosi of wanting to keep Trump "in limbo" indefinitely.

Some Senate Democrats are now saying that Pelosi should release the impeachment articles so that the trial can get underway. But there appeared to be no clamour from Pelosi's fellow Democrats in the House for a change in her strategy.

"We need to know what the plan is," Democratic Representative Gregory Meeks.

The House last month charged Trump with abusing his power for personal gain in connection with his effort to pressure Ukraine to announce a corruption investigation of former Vice President Joe Biden, a leading contender for the Democratic nomination to face Trump in November's presidential election.

It also charged the Republican president with obstructing Congress by directing administration officials and agencies not to cooperate with the impeachment inquiry.

Under the U.S. Constitution, the House brings impeachment charges and the Senate holds the subsequent trial to decide whether to remove a president from office. A two-thirds majority of the Senate is needed to do so.

Trump, who says he did nothing wrong and has dismissed his impeachment as a partisan bid to undo his 2016 election win, is likely to be acquitted in the trial, as no Republicans have voiced support for ousting him from office.

McConnell has said that Senate rules prevent it from starting the trial until the House sends it the articles of impeachment.

Pelosi said late on Tuesday that McConnell should reveal the Senate's plans for the coming trial in a written resolution before she agrees to send the articles of impeachment to the Senate.