No relationship in entire world like the Canada-US one: Trudeau meets Obama on first state visit

Obama laid out a full band and ceremonial guard on the South Lawn of the White House, making the recently elected prime minister the first Canadian leader in 20 years to receive an official-level visit.

The pair will later meet in the Oval office, hold a Rose Garden press conference and a coveted state dinner.

The 54-year-old Obama has saluted Trudeau, 44, as political and generational kin, an ideological bedfellow who shares a belief in the importance of healthcare, gay rights and tackling climate change. 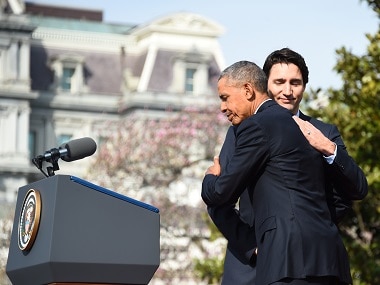 US President Barack Obama and Canada's Prime Minister Justin Trudeau hug during a welcome ceremony during a State Visit on the South Lawn of the White House. AFP

"I'm proud to be the first American president to stand with a Canadian prime minister and be able to say that in both our nations, healthcare is not a privilege for a few, but is now a right for all," Obama said, touting his landmark healthcare reforms.

Obama then joked about national rivalries over who's beer is best and Canada's national obsession, ice hockey.

"Where's the Stanley Cup right now?" Obama teased. "I'm sorry, is it in my hometown with the Chicago Blackhawks?"

Trudeau hit back that the team's trio of superstars — Patrick Sharp, Jonathan Toews and Duncan Keith — were among Canada's greatest exports.

Early on Thursday, the White House announced that Canada had agreed to match an existing US target of reducing "methane emissions by 40-45 percent below 2012 levels by 2025 from the oil and gas sector."

Changing of the guard

During former prime minister Stephen Harper's long tenure, the environment had been a serious point of contention with Washington.

Harper had argued forcefully for building a new trans-border pipeline to carry Canadian crude through the United States, a plan that Obama ultimately vetoed.

Obama and Trudeau met as their country's leaders for the first time at an Asia Pacific Economic Cooperation summit in Manila in November, a month after the Canadian won a general election.

Then, the two men put aside differences over Syria and the fight against the Islamic State group to joke about graying hair and trade compliments about their spouses and kids.

Trudeau has refused to reconsider a decision to pull Canadian jets out of Iraq and Syria, a campaign promise.

Still, Obama was effusive: "I'm confident that he's going to be able to provide a great boost of energy and transform the Canadian political landscape," Obama said, inviting Trudeau to visit Washington.

"The first call I made to him, I said, 'Justin, congratulations. You and your family look great. I know Canadians are incredibly inspired by your message of hope and change,'" Obama said, echoing the messages of his own 2008 election campaign.

"I just want to point out that I had no gray hair when I was in your shoes seven years ago. So if you don't want to gray like me you have to start dying it soon. Because it's too late."

Trudeau joked that gray hair was beyond his control and said he looked forward to the trip to Washington.

"My wife Sophie is going to be very excited to hear about Michelle's garden, because she has started a vegetable garden as well in our backyard," he said, referring to the US first lady.

"But what Barack pointed out to me about how fast his daughters grew in the seven years since that first night of his electoral victory really struck home to me," Trudeau said.

"I am making sure to try and remain as attentive and present for my kids, not just because it makes me a better parent and a better person, but also because it's what keeps us focused as leaders on what actually matters."