By Jonathan Allen and Brendan O'Brien MINNEAPOLIS (Reuters) - An expert in the use of force by police on Wednesday faulted the actions of former Minneapolis policeman Derek Chauvin in last year's deadly arrest of George Floyd, testifying that no force should have been used after Floyd was handcuffed and prone. 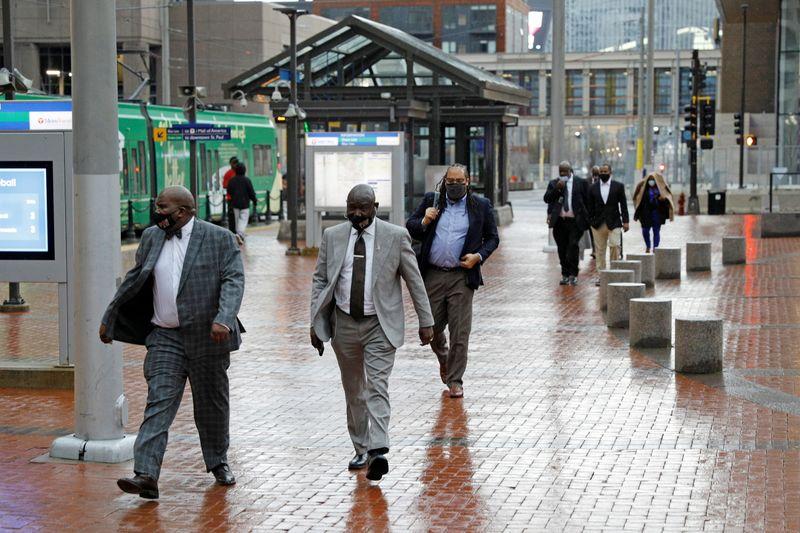 By Jonathan Allen and Brendan O'Brien

MINNEAPOLIS (Reuters) - An expert in the use of force by police on Wednesday faulted the actions of former Minneapolis policeman Derek Chauvin in last year's deadly arrest of George Floyd, testifying that no force should have been used after Floyd was handcuffed and prone.

Los Angeles Police Department Sergeant Jody Stiger appeared as a prosecution witness at Chauvin's murder trial, as prosecutors sought to further demonstrate that the fired former officer disregarded his training when he knelt on Floyd's neck for more than nine minutes.

Stiger told jurors that Floyd did not pose an immediate threat or actively resisted arrest at the time when Chauvin used deadly force on the 46-year-old Black man while he was handcuffed in the prone position in the May 2020 incident.

"My opinion was that no force was reasonable in that position," Stiger testified. "The pressure ... caused by the body weight could cause positional asphyxia and could cause death."

The incident was captured on video, and Floyd's death prompted protests against racism and police brutality in many cities across the United States and around the world.

Chauvin, who is white, has pleaded not guilty to murder and manslaughter charges, arguing that he was following the training he had received in his 19 years on the police force. Three other officers on the scene have been charged with aiding and abetting murder and will stand trial later this year.

Here are some of the most important moments from the eighth day of witness testimony:

Stiger, who has reviewed 2,500 cases in which police used force, resumed his testimony after first appearing on Tuesday.

Stiger also testified that Chauvin squeezed Floyd's hand to get him to comply with the officer's orders while he was handcuffed in the prone position. Stiger testified that Floyd did not appear to have an opportunity to comply.

"At that point it was just pain," Stiger said.

Stiger also testified that members of the crowd gathered at the scene did not figure into his assessment of the situation since they did not pose a threat.

Records showed Chauvin completed 867 hours of police training. Stiger said that was "absolutely" enough time to prepare him for this situation.

Lieutenant Johnny Mercil, who teaches the proper use of force for the Minneapolis Police Department, told jurors on Tuesday the neck restraint applied by Chauvin was unauthorized. Officers are trained to use the least amount of force necessary to subdue a suspect, Mercil said.

(Reporting by Jonathan Allen in Minneapolis and Brendan O'Brien in Chicago; Editing by Will Dunham)