No compromise in sight on Iran nuclear deal, Germany says

WASHINGTON (Reuters) - Europe and the United States remain deeply divided over how to proceed after Washington's exit from the 2015 Iran nuclear accord, German Foreign Minister Heiko Maas said on Wednesday after back-to-back meetings with two senior U.S. 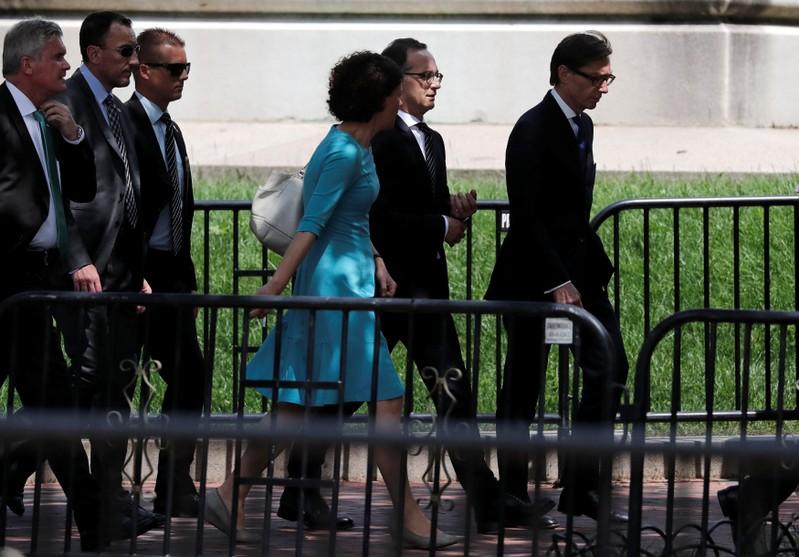 WASHINGTON (Reuters) - Europe and the United States remain deeply divided over how to proceed after Washington's exit from the 2015 Iran nuclear accord, German Foreign Minister Heiko Maas said on Wednesday after back-to-back meetings with two senior U.S. officials.

Maas issued his sober assessment after a meeting with Secretary of State Mike Pompeo, saying the two officials had restated their known positions, but no new information emerged.

He said he hoped more concrete details might emerge about Washington's plans for Iran if a four-way meeting among Germany, Britain, France and the United States could be arranged.

Maas said he told U.S. officials that Europe remained "very, very united" in supporting a 2015 nuclear deal with Iran because it feared a proliferation of atomic weapons on its doorstep.

Trump pulled the United States out of the accord earlier this month, shrugging off appeals from Washington's European allies which argued that the deal had succeeded in curbing Tehran's nuclear programme in return for a lifting of sanctions.

Scrapping the deal would allow Iran to resume its nuclear programme and this would "massively jeopardise" Europe's security, Maas told reporters after what he called a frank but constructive meeting with Bolton.

"Europe is very, very united in its position on the nuclear accord with Iran, and that will not change... We don't want a proliferation of nuclear weapons in our expanded neighbourhood," Maas said.

Iran's Supreme Leader Ayatollah Ali Khamenei said on Wednesday that Trump's rejection of the nuclear deal showed that the Islamic Republic could not deal with a country that could not keep its commitments.

Maas said European countries shared U.S. concerns about Iran's continued development of ballistic missiles and its behaviour in the Middle East, but believed those issues should be addressed without undermining the nuclear deal.

On Monday Pompeo threatened Iran with "the strongest sanctions in history" if it did not curb its regional influence, accusing Tehran of supporting armed groups in Syria, Lebanon and Yemen.

Senior officials from the remaining parties to the accord - Britain, China, France, Germany and Russia - will meet their Iranian counterpart on Friday in Vienna.

The meeting will assess what can be done to keep the deal alive and circumvent extraterritorial U.S. sanctions that are impacting foreign business appetite for Iran.

Maas said he expected the coming discussions to be "difficult" but gave no details.

He also said European leaders were concerned about the future of the transatlantic relationship, but expected it to withstand differences over Iran and other thorny issues.

Maas said he had also discussed the Syrian civil war and the overall situation in the Middle East, as well as trade disputes in his meetings. European countries have also been rattled recently by Trump's decision to move the U.S. Embassy in Israel to Jerusalem.