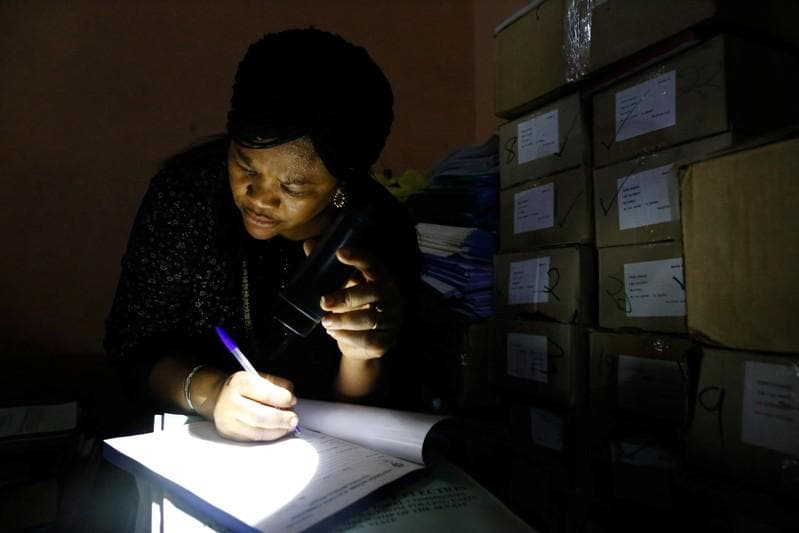 By James Macharia and Ahmed Kingimi

President Muhammadu Buhari and his main challenger, businessman Atiku Abubakar, both said they were confident of victory when casting their ballots in an election which was already delayed by a week due to logistical problems.

The vote in Africa's biggest economic power is too close to call, with the outcome hinging on which man voters trust most to revamp an economy still struggling from a 2016 recession.

Buhari, a former military ruler who is seeking a second elected term faces Atiku, a former vice president who has pledged to expand the role of the private sector in Africa's most populous nation and top oil producer.

They lead a field of more than 70 candidates in an election which was postponed last Saturday just hours before it was due to begin.

On Saturday, voting had been completed in some areas and the counting of ballots was taking place, Reuters witnesses said.

"The Independent National Electoral Commission is generally satisfied with the process and the procedures for the conduct of these present elections," INEC official Festus Okoye told reporters in the capital, Abuja.

But he said there had been challenges related to the delayed start of voting in some polling stations and INEC had extended hours in the places affected.

Okoye said INEC was investigating reports of attempts to steal electoral material in Lagos state and the southeastern state of Anambra, as well as violence in the oil-rich southern state of Rivers.

In the northeast, where Islamist insurgents have waged a decade-long war, blasts were heard in Maiduguri, state capital of Borno state, shortly before polls were due to open. In neighbouring Yobe state, residents in the town of Geidam fled an attack around the same time.

A group called Islamic State West Africa Province, an off-shoot of Boko Haram, claimed it had carried out an attack in Maiduguri. Boko Haram had warned people not to vote.

Army spokesman Colonel Sagir Musa earlier said there had not been any attack on Maiduguri, but there had been an exercise by the military. He called the Geidam attack "futile" and said there were no casualties.

Buhari, who voted in his hometown of Daura in the northern state of Katsina, said: "I will congratulate myself, I'm going to be the winner," when asked by reporters if he would congratulate his rival, should Atiku win.

Atiku cast his ballot in the eastern Adamawa state.

"I am impressed by the turnout of the people," he told reporters.

"I look forward to a successful transition."

Some of the country's 72.8 million eligible voters were frustrated by delays.

Kingsley Moghalu, a presidential candidate for the Young Progressives Party, said he had only managed to vote at noon in the southeastern state of Anambra. He said polls opened two hours late and machines were not working.

"If as a presidential candidate my polling unit can be treated in this manner, I can imagine what a lot of Nigerians are going through in many parts of the country," he said.

Other voters echoed his concerns.

"I've been to 10 polling units today. I've been redirected many times," said Victor Kanoba, a voter in Lagos.

John Tomaszewski, an observer with the joint U.S. National Democratic Institute and International Republican Institute delegation, said delays had been expected given the challenge of getting materials to the polling stations in time.

"Logistics weren't properly managed despite the postponement of the polls," said Idayat Hassan, director of Abuja-based think-tank Centre for Democracy and Development.

However, in Lagos' business district Victoria Island, Reginald Anthony, 45, who runs a transport business, said: "We are seeing a transparent election, everything is open for everyone to see".

After voting in the northern Kano state, Hadisa Hayatu, a 38-year old housewife, said: "I voted for Buhari because he has assured us that he is going to build on what he has done on security and other issues."

An Atiku supporter in Kano, stylist Laurie Isaac, 27, said: "We need change. I need more work. I need my salary to increase."