Next U.S.-North Korea summit must give concrete results - Seoul 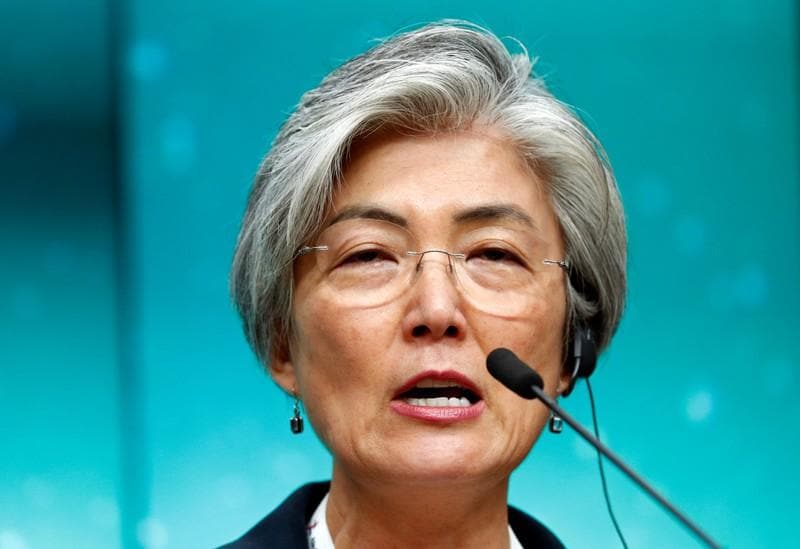 By Soyoung Kim and Alessandra Galloni

Foreign Minister Kang Kyung-wha told the World Economic Forum in Davos that the two leaders should make "really great big strides" on the road to denuclearisation and lasting peace on the Korean peninsula, in line with international demands.

Trump and Kim met in Singapore last June for an unprecedented summit, producing a promise to work towards "complete denuclearisation" of the peninsula, but the two sides have since struggled to agree how to implement the pledge.

The two sides have given no sign of having narrowed their differences over U.S. demands that North Korea abandon its nuclear weapons programme and Pyongyang's demands for a lifting of economic sanctions and a formal end to the Korean War.

North and South Korea are still technically at war, given the 1950-53 conflict ended in an armistice, not a peace treaty.

The North Korean envoy's recent visit to Washington has put nuclear talks "back on track", Kang said in Davos. Details of the second summit would continue to be negotiated despite a partial government shutdown in Washington, she added.

Trump did not elaborate on the country chosen to host the summit, but Vietnam has been considered a leading candidate.

Earlier on Wednesday, Kang met with Japanese Foreign Minister Taro Kono on the sidelines of the World Economic Forum to discuss the planned second summit between Washington and Pyongyang, Seoul's foreign ministry said in a statement.

Kono agreed that "concrete results" will have to be made toward denuclearisation, while stressing that Japan expects close communication and coordination with South Korea on the nuclear negotiations regardless of "several pending issues" between the neighbours, the ministry said.

The two U.S. allies share a bitter history that includes Japan's 1910-45 colonisation of the Korean peninsula and the use of comfort women, Japan's euphemism for girls and women, many of them Korean, forced to work in its wartime brothels.

The rows between the neighbours flared again in late October when South Korea’s Supreme Court ruled that Japan’s Nippon Steel & Sumitomo Metal Corp must compensate South Koreans for their forced labor during World War Two. Japan maintains that the issue of forced labor was fully settled in 1965 when the two countries restored diplomatic ties, and has denounced the ruling as "unthinkable."

Wartime history has long been a stumbling block for relations between the neighbours, sparking concern about regional efforts to rein in North Korea's nuclear programme.

In the latest escalation of tensions, a Japanese patrol aircraft made an "intimidating" pass over a South Korean warship on Wednesday, in what South Korea's military said was a "clear provocation" towards a friendly neighbour.

Kang expressed "regret" over the incident and urged defense authorities from the two countries to resolve the issue soon, the foreign ministry said.