By Peter Szekely NEW YORK (Reuters) - As the United States recorded its highest single-day death toll since the coronavirus pandemic began nearly a year ago, New York Mayor Bill de Blasio on Wednesday said the city would fall short of its inoculation goals unless it could get more vaccine. 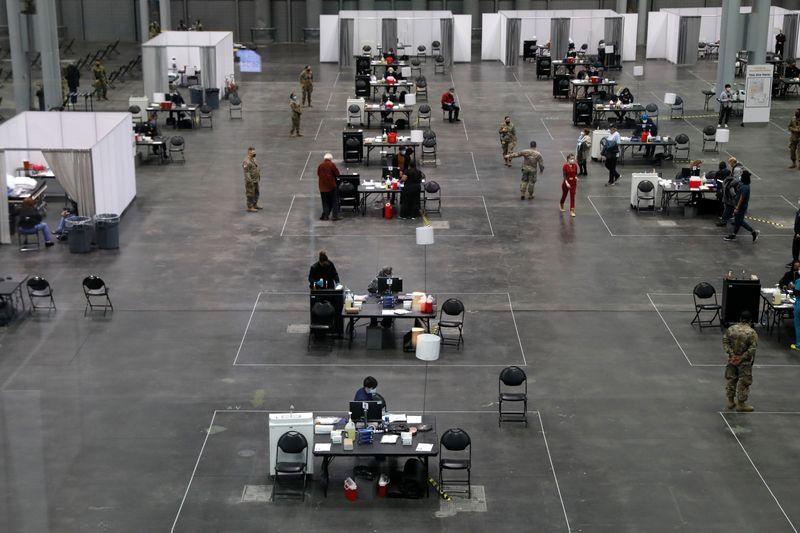 NEW YORK (Reuters) - As the United States recorded its highest single-day death toll since the coronavirus pandemic began nearly a year ago, New York Mayor Bill de Blasio on Wednesday said the city would fall short of its inoculation goals unless it could get more vaccine.

The mayor said short supplies were hampering New York City's efforts to increase its immunization campaign. His appeal comes as the country as a whole struggles to meet an overall goal, with vaccinations now running far behind a target of 20 million people by now.

"We need the federal government, the state government and the manufacturers to step up and get us more supply immediately,” de Blasio said at a briefing.

The country's most populous city is adding vaccination sites across its five boroughs, including its two Major League Baseball parks, and has succeeded in loosening restrictions on who is eligible for vaccination, de Blasio said.

Both New York and California have opened inoculations to health people as young as 65.

New York is on track to inoculate 1 million of its more than 8 million residents by the end of the month, but only if it gets enough vaccine, he said.

"I confirmed with our healthcare team yesterday that even with normal supplies that we expect to have delivered next week, we will run out of vaccine at some point next week, unless we get a major new resupply," he added.

At the Javits Center in Manhattan which was pressed into service as a temporary hospital in April, health officials said they were prepared to vaccinate 10,000 people in 12 hours, with the ability to ramp up to 25,000 in a 24-hour period.

“We consider this a wartime mobilization, and that lives are on the line every minute of every day," state Health Commissioner Howard Zucker told reporters.

Nationwide, slightly more than one-third of the 29.4 million doses distributed to states have been administered, according to data from the U.S. Centers for Disease Control and Prevention.

The U.S. Food and Drug Administration has authorized the vaccine from Pfizer and partner BioNTech SE and a second vaccine from Moderna Inc for emergency use. Both vaccines require two doses spaced a few weeks apart.

The chief science officer of Johnson & Johnson said the company is on track to roll out its single-shot coronavirus vaccine in March, and it plans to have clear data on how effective it is by the end of this month or early February.

In an interview with Reuters on Tuesday, Dr. Paul Stoffels also said J&J expected to meet its stated target of delivering 1 billion doses of its vaccine by the end of this year as the company ramps up production.

The country's struggle to inoculate its population comes as the number of people to die from the disease hit a daily record 4,336 on Tuesday, according to a Reuters tally.

That brought the number of U.S. COVID-19 casualties to 380,524, with the number of cases at 22.7 million by Tuesday night, more than any other country.

The widely cited model of the University of Washington's Institute for Health Metrics and Evaluation expects January to be the pandemic's deadliest month so far in the United States.

The virus is projected to take more than 108,000 U.S. lives this month before the death rate ebbs as more vaccine is administered, the IHME said. By April 1, it expects a death toll in the United States of 567,000.On Tuesday, federal health officials agreed to release millions of COVID-19 vaccine doses the government had held back for second shots, and they urged states to offer them to all Americans over age 65 or with chronic health conditions. [L1N2JN0P1]

U.S. Department of Health and Human Services Secretary Alex Azar said during a news briefing that the U.S. pace of inoculations has risen to 700,000 per day and is expected to rise to 1 million per day within a week to 10 days.

A leveling-off of the number of COVID-19 patients requiring hospitalization has emerged as an encouraging sign in the past week.