By Elizabeth Piper and Gabriela Baczynska SALZBURG, Austria (Reuters) - Other European leaders pushed back against Prime Minister Theresa May's Brexit plan on Wednesday, hours before she was due to try to sell it to them at a summit in Austria. EU summit chairman Donald Tusk repeated criticism of her proposals for future customs arrangements and for the border between the British province of Northern Ireland and EU member Ireland, saying these needed to be reworked 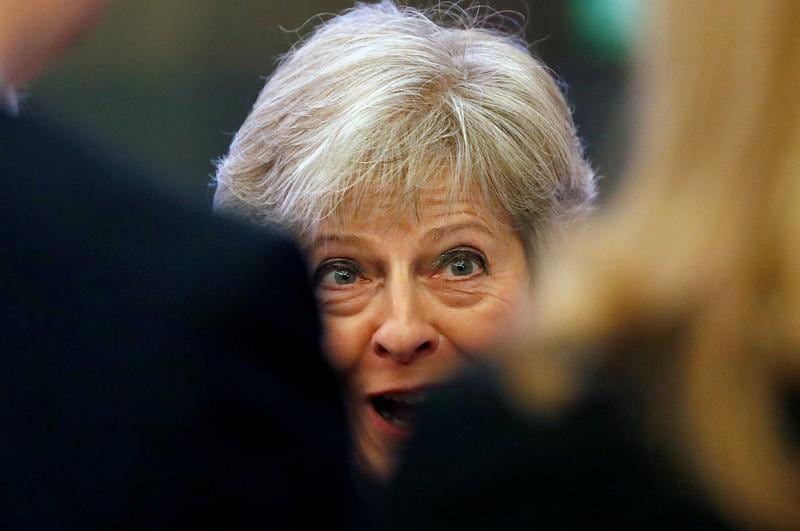 SALZBURG, Austria (Reuters) - Other European leaders pushed back against Prime Minister Theresa May's Brexit plan on Wednesday, hours before she was due to try to sell it to them at a summit in Austria.

EU summit chairman Donald Tusk repeated criticism of her proposals for future customs arrangements and for the border between the British province of Northern Ireland and EU member Ireland, saying these needed to be reworked.

Austrian Chancellor Sebastian Kurz said Brussels had moved its position and Britain should respond in kind.

But May has shown little sign of backing away from her "Chequers" plan. In a carefully placed article in a German newspaper on the eve of the EU summit in Salzburg, Austria, she said the EU should drop "unacceptable" demands over Brexit, the biggest policy shift for Britain in almost half a century.

Tusk said some elements of the British plan, known as Chequers for the country house where it was hammered out in July "indicated positive evolution in the UK's approach".

But he added: "On other issues, such as the Irish question, or the framework for economic cooperation, the UK's proposals will need to be reworked and further negotiated."

May's proposal calls for Britain to remain in a free trade zone with the EU for agricultural and manufactured goods, that would be covered by a "common rulebook" of regulations after Brexit.

And she will not accept an EU proposal that would keep British-ruled Northern Ireland in a customs union with the bloc if there is no other plan in place to prevent a hard border across the island of Ireland.

A British government source said London welcomed the EU's commitment to finding a solution to the border issue, but could not accept any proposal that would effectively move the customs frontier into the Irish Sea.

With just over six months to go until Britain leaves the EU, time is pressing and both sides are keen to secure some kind of deal before the end of the year.

Writing in Germany's Die Welt, May said the two sides were "near to achieving the orderly withdrawal that is an essential basis for building a close future partnership".

"With goodwill and determination on both sides we can avoid a disorderly exit and find new ways of working together."

At a summit dinner at the Felsenreitschule theatre -- known to film fans for a scene in the musical 'The Sound of Music' -- May will make another pitch for support for her Chequers plan.

She will then be out of the room on Thursday afternoon when the other 27 leaders discuss her Brexit proposals.

Kurz, hosting the two-day summit, said he was still optimistic of reaching a deal, while warning that while a no-deal Brexit would be difficult for the EU, it would be terrible for Britain.

"If you want to make a deal both sides will need to try to find a compromise," he said. "I am still optimistic."

While both sides have been making positive noises, how to keep an open border between Northern Ireland and the Irish republic remains one of the biggest obstacles.

"On Brexit, it's very difficult. We have nothing on Ireland," Jean Asselborn, Luxembourg's foreign minister, told Reuters.

But Northern Ireland's Democratic Unionist Party, which backs May's minority government in Westminster said that would still mean an unacceptable border between the province and the rest of the United Kingdom.

The government source said: "We have been very clear that what we cannot accept is Northern Ireland being separated off from the UK customs territory."

EU officials are minded not to paint May into a corner, aware that she faces increasing opposition to her plans in her Conservative Party and needs a victory of sorts to persuade a reluctant parliament to back a deal.

May has told lawmakers that they will vote either for a Chequers-based deal or to leave without an agreement. Mel Stride, a junior treasury minister, said pro-Brexit and pro-EU lawmakers could usher in a second referendum on EU membership if they reject her plan.

"They'll end up in the situation where we could have a second referendum and we could end up not leaving the EU altogether," he told Sky News. "There is a danger of that happening."