The progress of the war in Ukraine is now making it abundantly clear: That it is the result of a US decision to declare war against Russia through NATO. Both former French president Nicolas Sarkozy and former German chancellor Angela Merkel had opposed Ukraine joining NATO at the Bucharest Summit in 2008, the supposed prospect of which has prompted Russian military action. They had argued it would be very provocative for Vladimir Putin. In fact, Angela Merkel had said in a subsequent interview that such a move would amount to a ‘declaration of war’ against Russia.

By 2013, Ukraine had already become a de facto member of NATO, with US conduct indicating that it anticipated the onset of war. Only Donald Trump’s election and refusal to acquiesce to a military package, in August 2019 under the Ukraine Security Assistance Initiative, was the impediment that needed to be addressed first by the US establishment that wanted to precipitate a denouement. This was the issue that mobilised the entire US establishment, determined to take on Russia, against Donald Trump and led to his elimination from the presidency with methods deemed suspect by many, as originally claimed by Trump himself.

The moment Trump left the White House, the US began transferring arms to Ukraine on a prodigious scale and began a programme training its armed forces, evidently preparing it for the battles that were to begin on 24 February 2022. On that day, Russia launched a preemptive assault against the 250,000 Ukrainian troops that had been assembled along the Dnieper to attack Russian-speaking eastern Ukraine — the Donetsk and Luhansk. Among the Ukrainian forces already engaged in military action in eastern Ukraine were the notorious far-right Azov battalion, its symbol reminiscent of the Nazi Wolfsangel and their origins with the alleged collaborators in the murder of 33,771 Jews at Babi Yar in September 1941. Putin’s preemptive attack, invading Ukraine, was the opposite of Joseph Stalin’s reluctance to mobilise in August 1941, in order to not provide a possible casus belli to Adolf Hitler, though the German army was already preparing to strike against the Soviet Union.

The NATO declaration of war, it now seems, was an attempt to fully capitalise on Mikhail Gorbachev’s ill-considered chaotic retreat from Eastern Europe in 1991. He had shown no concern for the security implications for Russia of abandoning the historic gateway of repeated invasions of Russia over many centuries, ending in the Nazi assault of August 1941 to liquidate Russia and its people completely. Astonishingly, Gorbachev was satisfied with US verbal assurances that NATO would not expand eastwards in the aftermath of the Soviet withdrawal. Even more shockingly, he was unconcerned about foreign domination of the vast plains of Ukraine, which would lay open the way into Russian territory for an invading army. Even the inveterately peace-loving Mahatma Gandhi would have baulked at the idea of giving up all of the Punjab and modern Haryana to Pakistan, leaving wide open the doorway to Delhi and much of the rest of India as well.

In fact, NATO troops on Ukraine’s eastern national border, adjacent to Russia, would have been equivalent to Chinese troops in Nepal’s pro-Indian Terai region along the border of Uttar Pradesh and Bihar if Nepal had decided to form a military alliance with China. Would India’s pro-NATO columnists and armchair strategists have then argued it was Nepal’s sovereign prerogative to choose its alliance relationships, as most Europeans are saying to justify the mayhem on their continent?

As it turned out, NATO expanded eastwards without pause in successive waves, embracing Poland, the Czech Republic, Slovakia, Hungary, Bulgaria, Croatia, Kosovo and the Baltic States bordering Russia and others, with an alarmed Russia watching but it did not react aggressively. The US airily dismissed the assurances it had given at the very outset to Gorbachev to forbear on eastward expansion, saying they had only been verbal. The CIA then proceeded to sponsor Orange Revolutions blatantly to install its preferred regimes and succeeded in the Ukraine in 2014. But Putin rose to the challenge and thwarted the CIA conspiracy to overthrow pro-Russian governments in Georgia and Belarus.

In 2008 Vladimir Putin, who had earlier, at one point, sought Russian membership of NATO, though with suitable modifications to its treaty, emphatically warned of a redline where Ukraine was concerned. He cautioned unambiguously Russia would not accept its induction into NATO. This was the rationale for the warnings issued by Nicolas Sarkozy and Angela Merkel before war was effectively declared by NATO against Russia fourteen years later. Ukrainian armies massed ready for action in the east where Russian-speakers had seceded, but Putin struck first. However, striking first is a military tactic in war and not necessarily an indication of a move to achieve political goals which had been decided before the military action. 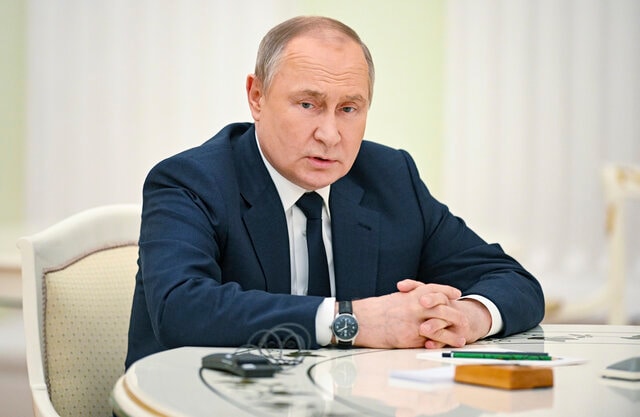 The war against Russia is being waged with plentiful advanced NATO weaponry of various description, worth an estimated $40+ billion to date. The purpose is to slow down Russian troops by destroying advancing armour and interdicting aerial assets and thereby imposing severe costs. The sophisticated missile that sank the Russian flagship, the Moskva, in the Black Sea was likely to have been operated by experienced US personnel on the ground, as one US military expert has suggested. In any case, US intelligence organising the attack has been acknowledged and the claim it was hit by a missile manufactured by Ukraine is doubtful. It may also be surmised the war is actually being directed by NATO generals from Brussels and elsewhere on the Ukrainian border, including possibly Poland. There are highly likely to be NATO officers on the battleground too, directly supervising frontline combat.

Some of the success in slowing down the Russian advance and now reversing early losses in Kharkiv, Ukraine’s second city, can be attributed to the value of the joint effort of NATO officers and local Ukrainian troops on the ground. One overall factor in the progress of the war has been Russian hesitation to engage in major bombing sorties prior to the advance of ground troops. This is probably a political decision to limit Ukrainian civilian casualties in the hope of retaining the possibility of resuming amicable relations with sections of the population.

The Kharkiv setback might now prompt a re-think and a more damaging conventional approach to the assault may be in the offing. The grave danger is a nuclear escalation since Russian strategic forces have been put on alert, signalling to the US to desist from deepening its intervention, and miscalculation by either side an ever-present danger. US political elites seem to regard such a dire risk as a small price to pay to induct Ukraine into NATO. The unbridled arrogance and ambition is hard to credit and the US ability to force all NATO members to comply, despite unfolding socio-economic disaster at home, breathtaking. In addition, the alacrity with which the entire Western media turned into crude propagandists for the war effort is impressive.

The US goal of embroiling Russia in war is clearly designed to eliminate it as a global military power by issuing threats at the border with Ukraine. One aspect of the US strategy was of course to effectively end the ability of the Russian Black Sea fleet to operate out of Sevastopol. This was a US pipedream that Putin was unlikely to countenance and he ended by forcibly taking back the ethnically-Russian Crimean Oblast. The former premier of the USSR, Nikita Khrushchev, a Ukrainian himself, had assigned it in February 1954 to the Ukrainian SSR, then part of the USSR. The US was hoping, in the first instance, to use Ukraine’s membership of NATO to menace Russia at its border with Ukraine. The evident goal was to weaken Russia’s nuclear retaliatory capabilities and curb its involvement in Syria in and elsewhere in the world.

A much more truly ambitious apparent long-term US ambition seems to have been to instigate the breakup of Russia into smaller manageable countries, paralleling the emergence of nations in eastern Europe after 1989. It could then deal with a reconstructed historical Russia of smaller emerging statelets run by competitive elites at odds with each other. These new polities, anxious for revenues, will then, presumably, be eager to sign lucrative commercial deals with US corporations since the entire region is extraordinarily wealthy in raw material resources. This breakup plan is not dissimilar to the one intended for India, which is at a more advanced stage of political degeneration as a united polity. Some of its crucial constituent regional states are already displaying eagerness to exercise de facto political sovereignty.

The writer taught international political economy for more than two decades at the London School of Economics and Political Science. Views expressed are personal.

Ukraine had been under Moscow's spiritual leadership since at least the 17th century, but part of the Ukrainian Orthodox Church broke with Moscow in 2019 over Russia's annexation of Crimea and support for separatists in Donbas