Washington: Speaker Nancy Pelosi set a House vote for Thursday on limiting President Donald Trump's ability to take military action against Iran as Democratic criticism of the US killing of a top Iranian general intensified.

Because of a procedural dispute between the two parties, it was unclear whether Thursday's vote would be a step toward binding Trump's hands on Iran or a symbolic gesture of opposition by Democrats. 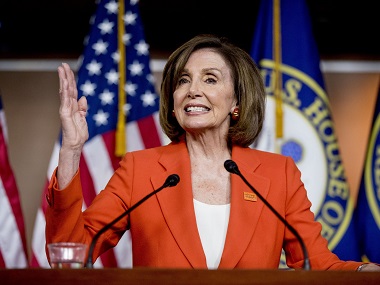 Republicans say the proposal — a special type of resolution that does not get the president's signature — does not have the force of law. Democrats say that under the 1973 War Powers Act, it would be binding if also approved by the Senate. The matter has not been definitively decided by federal courts.

The House vote on a war powers resolution was scheduled shortly after a briefing on Iran Wednesday by top administration officials that many Democrats criticized as lacking specific justification for the killing.

"Members of Congress have serious, urgent concerns about the Administration’s decision to engage in hostilities against Iran and about its lack of strategy moving forward," Pelosi said in her statement.

"Congress hereby directs the President to terminate the use of United States Armed Forces to engage in hostilities in or against Iran or any part of its government or military" unless Congress declares war on that country or enacts legislation authorizing use of force to prevent an attack on the US and its forces, the five-page resolution says.

The measure is being sponsored by freshman Rep. Elissa Slotkin, D-Mich., a former CIA intelligence analyst who had served in Iraq.

The showdown between the White House and Capitol Hill was the latest example of Trump’s willingness to break the norms in Washington. Trump did not consult with congressional leaders ahead of the attack that killed the Iranian general and afterward sent Congress a notification explaining the rationale, but kept it classified.

Trump, facing one of the greatest tests of his presidency, said Wednesday that Iran appeared to be "standing down" and said the US response would be to put in place new economic sanctions "until Iran changes its behavior".

The strikes by Iran had pushed Tehran and Washington perilously close to all-out conflict and put the world's attention on Trump as he weighed whether to respond with more military force.

The Republican president delivered his remarks surrounded by his national security advisers in the foyer of the White House. His comments came after a late-night tweet in which he insisted "All is well!" after the strikes.

"How much is enough? How many more Americans did Soleimani need to kill before somebody supports taking him out?'' asked Louisiana Rep. Steve Scalise, the No. 2 Republican in the House. The world is a safer place without Soleimani in it, he added.

Democrats were unconvinced that the threat posed by Soleimani was imminent or that other alternatives to the killing were pursued in good faith. By not disclosing many details of the threat, Trump was asking the American public to trust the very intelligence reports he has often disparaged, Democrats said.

Some Republicans also criticized the briefing by Secretary of State Mike Pompeo and other top officials. Sen. Mike Lee of Utah said it was "probably the worst briefing I've seen, at least on a military issue," in the nine years he's served in the Senate.

Lee called it "distressing" that officials suggested it would only embolden Iran if lawmakers debated the merits of further military action. He walked into the briefing undecided, Lee said, but left it favoring the war powers resolution being offered by Kaine.

"It is not acceptable for officials within the executive branch of government ... to come in and tell us that we can't debate and discuss the appropriateness of military intervention against Iran," Lee said. "It's un-American, it's unconstitutional, and it's wrong."