By Ginger Gibson and Richard Cowan WASHINGTON (Reuters) - The Democratic-led U.S. House of Representatives is expected to formally send impeachment charges against President Donald Trump to the Senate this week, where Majority Leader Mitch McConnell has vowed to help acquit his fellow Republican. 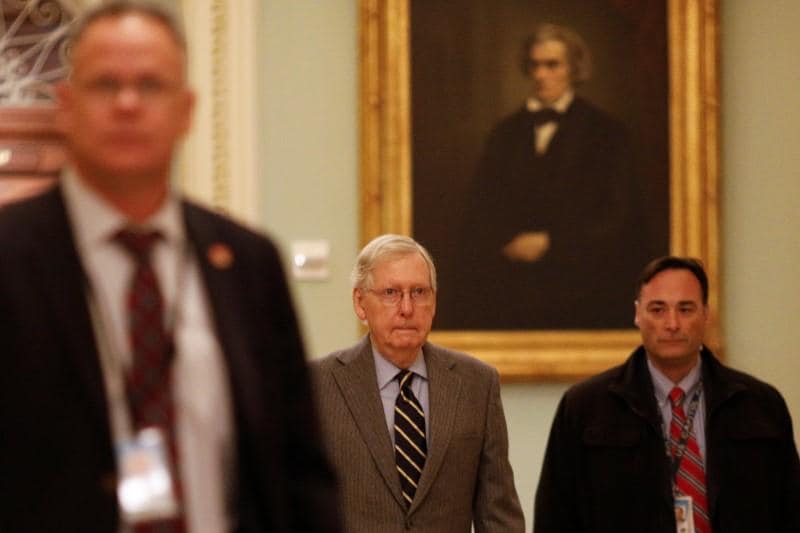 By Ginger Gibson and Richard Cowan

WASHINGTON (Reuters) - The Democratic-led U.S. House of Representatives is expected to formally send impeachment charges against President Donald Trump to the Senate this week, where Majority Leader Mitch McConnell has vowed to help acquit his fellow Republican.

Rather than immediately sending the two articles of impeachment passed by the House on Dec. 18 to the Republican-led Senate, Democratic House Speaker Nancy Pelosi held on to them, preventing McConnell from dispensing with the matter with a quick trial that cleared the president. The House charged Trump with abuse of power and obstruction of Congress in its investigation of his dealings with Ukraine.

House Democrats will discuss on Tuesday morning how to move forward, Pelosi said on Sunday, with the chamber possibly voting to send the charges to the Senate later that day.

The nearly month-long delay in sending over the charges, according to Pelosi, accomplished the goal of getting the U.S. public to see the need for calling witnesses in the trial after Trump's administration blocked some current and former officials from cooperating in the House impeachment inquiry.

Trump appeared on Sunday to reverse his position on how the Senate should proceed. Trump wrote on Twitter on Sunday that a full trial would give the Democrats who pursued impeachment undeserved credibility, and signaled support for having the Senate simply dismiss the charges with no trial.

McConnell has yet to say definitively how the Senate will conduct the trial.

He has not committed to allowing any witnesses or new documents in the proceedings and instead could steer the process toward a quick acquittal. McConnell has left open the possibility of deciding on witness testimony later in the trial. He has said he sees no chance of the Senate convicting Trump.

The impeachment charges stem from Trump's request that Ukraine investigate former Vice President Joe Biden, a leading contender for the Democratic nomination to face Trump in the Nov. 3 presidential election.

The Senate, which could open a trial rapidly after receiving the charges from the House, plans to meet daily except on Sundays each week to conduct the proceedings, likely beginning each day at noon ET (1700 GMT) and working until either 5 p.m. or 6 p.m. ET (2200 or 2300 GMT), according to congressional aides.

The Senate is expected to vote to acquit Trump even though some moderate Republicans have bristled over McConnell's reflexive support for the president.

(Reporting by Ginger Gibson; Writing by Will Dunham; Editing by Howard Goller)