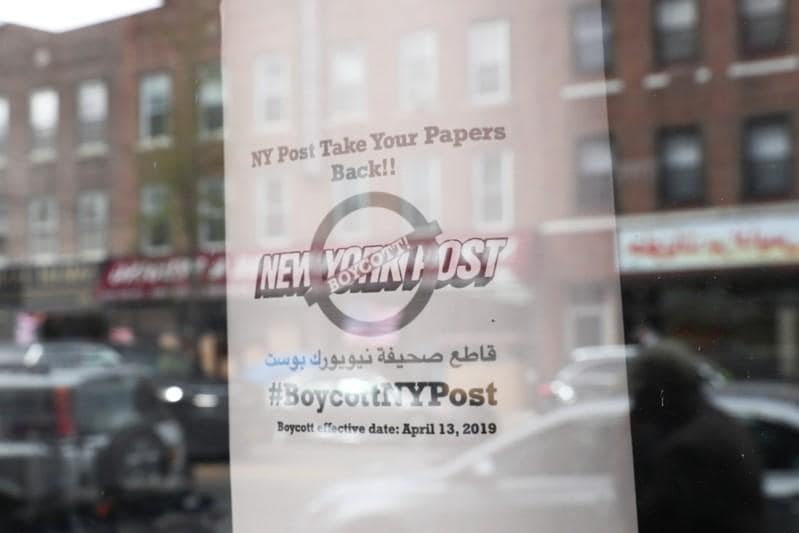 BURNSVILLE, Minn. (Reuters) - Supporters of U.S. Representative Ilhan Omar rallied outside a Minnesota business visited by U.S. President Donald Trump on Monday, after he launched a fresh attack on the Muslim-American lawmaker by calling her an "out of control" purveyor of "hate" speech.

Trump was in Minnesota, which Omar represents in Congress, for a tax reform roundtable.

Some of the Omar supporters who gathered outside Nuss Truck and Equipment in Burnsville, about 15 miles (24 km) south of Minneapolis, called on Democratic leaders in Washington to take a stand for Omar.

"Some of Ilhan’s words were taken out of context. I know that she abides by the Constitution. She is a proud American. She might have some opinions, but that shouldn’t put her in a position that we attack her," said Abdullahi Farah, a Somali-American who attended the rally.

Omar, an immigrant from Somalia, was elected to the U.S. House of Representatives in November. She represents the state's fifth congressional district, which is partially adjacent to the district Trump visited on Monday.

Writing on Twitter earlier in the day, Trump blasted both Omar and House Speaker Nancy Pelosi for defending her, after he tweeted a video on Friday suggesting Omar had been dismissive of the Sept. 11, 2001, attacks.

The video spliced news footage from 9/11 with a clip from a speech Omar gave last month in which she said "some people did something" in reference to the attacks.

"Before Nancy, who has lost all control of Congress and is getting nothing done, decides to defend her leader, Rep. Omar, she should look at the anti-Semitic, anti-Israel and ungrateful U.S. HATE statements Omar has made," Trump wrote. "She is out of control, except for her control of Nancy!"

The Minnesota branch of the Council on American-Islamic Relations (CAIR), a Muslim civil rights and advocacy group, responded to Trump's attacks by organising the rally, where people carried signs and chanted in support of Omar.

Democrats "could have done more to help [Omar] out, but in the end I think they care more about their image," said Abdirahman Abdullahi, an area resident.

About 200 people rallied in support of Omar while another 200 supporters of Trump gathered across the street and waved American flags.

Inside at the tax event, Trump railed against the U.S. immigration system and what he called its "horrible and foolish loopholes."

Lawmakers from Trump's Republican Party have accused Omar of minimizing the Sept. 11 attacks, while critics of the president say he took Omar's words out of context in order to stoke anti-Muslim sentiment.

Omar was speaking at a CAIR banquet in California in March when she made her controversial remarks about 9/11. Omar also said Muslims had "lived with the discomfort of being a second-class citizen and, frankly, I'm tired of it, and every single Muslim in this country should be tired of it."

Pelosi, in Europe leading a delegation, on Monday said the president should not use 9/11 as a political tool.

"I think that is wrong, I think it’s beneath the dignity of the office, and I don’t think that it plays that well, I hope that it doesn’t,” she said.

Omar said on Sunday that she had experienced an increase in threats on her life, many directly referencing or replying to the president's video.

Pelosi said Sunday she had spoken with the House Sergeant-at-Arms to ensure that Capitol Police are conducting a security assessment to safeguard Omar, her family and staff.

The White House said Sunday that Trump did not wish any harm in last week's Twitter post about Omar.

The House of Representatives approved a broad resolution condemning bigotry last month after remarks by Omar that some members of both parties viewed as anti-Semitic.