By Manuel Mucari MAPUTO (Reuters) - Mozambique's incumbent President Filipe Nyusi has won a landslide victory in an election it was hoped would calm tensions in a nation soon to become a top global gas exporter, but has instead stoked divisions as opposition parties cry foul. Nyusi secured 73% of the vote in the presidential race, the National Election Commission (CNE) said on Sunday, while his party, the ruling Frelimo, also won big in the legislative and provincial contests 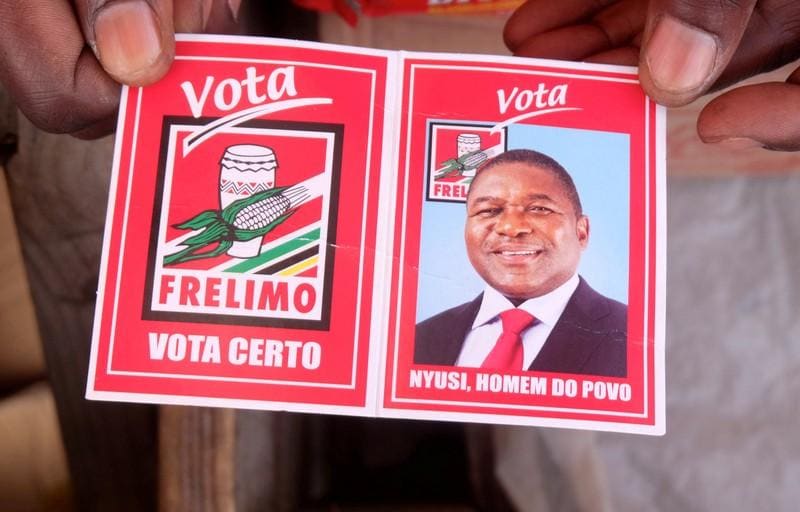 MAPUTO (Reuters) - Mozambique's incumbent President Filipe Nyusi has won a landslide victory in an election it was hoped would calm tensions in a nation soon to become a top global gas exporter, but has instead stoked divisions as opposition parties cry foul.

Nyusi secured 73% of the vote in the presidential race, the National Election Commission (CNE) said on Sunday, while his party, the ruling Frelimo, also won big in the legislative and provincial contests.

Ossufo Momade, candidate for former guerrilla movement turned main opposition party Renamo, which has already rejected the outcome, trailed with 21.88% of the vote, the CNE said.

During his second five-year term, Nyusi will be responsible for overseeing a gas boom led by oil giants such as Exxon Mobil Corp

Speaking to supporters in a suburb of the capital Maputo, where he appeared on stage to a chorus of cheers and vuvuzelas, Nyusi said he would further develop Mozambique and speed up the implementation of the deal.

"I will work so that we can have a prosperous, equitable and fair Mozambique," he told the crowd. "In these elections, the Mozambican people won."

It was hoped the Oct. 15 poll could set the seal on the fragile peace pact, designed to put a definitive end to four decades of violence between Frelimo and Renamo. The two fought a 16-year civil war that ended in a truce in 1992 but have clashed sporadically since.

Instead the deal is at risk of falling apart as opposition parties reject the results, claiming they were tarnished by fraud, violence and irregularities from the outset. Frelimo says the elections were free and fair.

Analysts say a return to all-out conflict is highly unlikely even if the deal collapses, but low-level violence, including from an armed group of breakaway former Renamo fighters, could worsen. That could suck the government's focus and resources away from the insurgency in the gas-rich north.

Eight members of the CNE, which is made up of Frelimo and opposition party representatives, voted against accepting the results earlier this week, verses nine in favour.

Speaking after the conference, Fernando Mazanga, a Renamo member of the CNE, said they distanced themselves from the results because of irregularities.

"It is shameful and a disgrace what we are witnessing here," he said.

Daviz Simango, of the third largest party the Mozambique Democratic Movement (MDM), secured just over 4% of the presidential vote.

Earlier on Sunday, he said MDM saw the election outcome as "null and void". A number of observer groups, including from the European Union, United States and Commonwealth, raised concerns about the process from registration through to vote counting.

Frelimo also won a majority in all 10 of Mozambique's provinces in the provincial poll - a contest seen as central to the survival of the peace pact.

For the first time, provincial governors will be appointed by the majority party in each province rather than the government - a key demand of Renamo during peace talks.

The party had wanted to win control of a number of provinces in Mozambique's centre and north to achieve this long-thwarted ambition for influence, but has instead come away empty handed.

Turnout was slightly higher than in the previous general election in 2014, with just over 50% of the more than 13 million registered voters coming out to cast their ballots.