By Deborah Bloom and Brad Brooks PORTLAND, Ore. (Reuters) - From a mountaintop observatory near Los Angeles to the normally verdant Cascade range in the Pacific Northwest, crews on Wednesday battled monster wildfires that raged well into their second week as scientists tracked the smoke drifting across Europe. 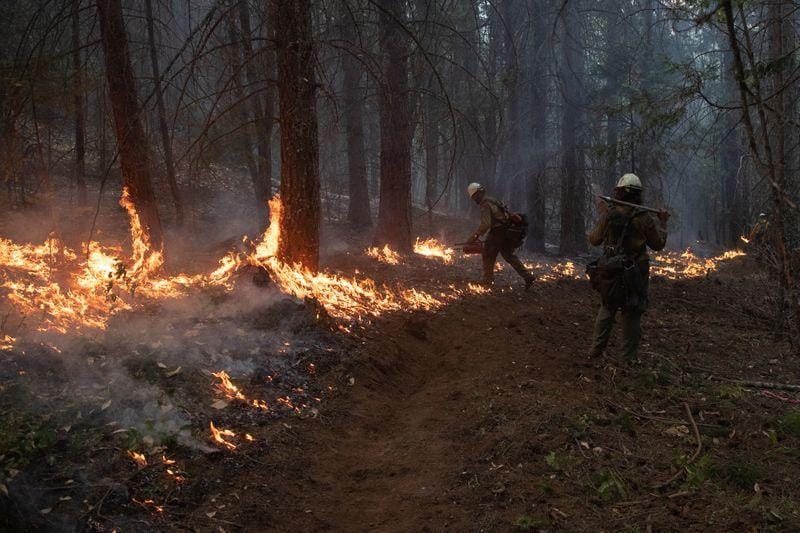 PORTLAND, Ore. (Reuters) - From a mountaintop observatory near Los Angeles to the normally verdant Cascade range in the Pacific Northwest, crews on Wednesday battled monster wildfires that raged well into their second week as scientists tracked the smoke drifting across Europe.

Scores of fires have burned some 3 million acres in California since mid-August and another 1.6 million in Oregon and Washington state since Labor Day, laying waste to several small towns, destroying thousands of homes and claiming at least 34 lives.

The fires have thrust concerns about climate change to the forefront of the U.S. election campaign, with Republican President Donald Trump downplaying the role played by global warming. Democratic challenger Joe Biden called Trump a "climate arsonist" who has ignored a "central crisis" facing the nation.

Trump late on Tuesday declared a federal disaster for the hardest-hit parts of Oregon, a state unaccustomed to the size and number of blazes sweeping the Northwest, many sparked by intense lightning storms and stoked by record-breaking heat and high winds.

With improved weather finally enabling fire crews to take the offensive, Pettner has been helping beat back the state's largest conflagration this season - the 190,000-acre Beachie Creek fire. As a local, she said losses from the blaze struck her on a personal level.

"Places that we would take our children camping or go and visit, we've seen those altered permanently," she told Reuters. "We won't see those places look the same probably in my lifetime.

Firefighters in Southern California scored a notable victory on Tuesday night, saving the famed Mount Wilson Observatory and its telescopes from being swallowed in the so-called Bobcat fire raging through the rugged peaks of the San Gabriel range above Los Angeles.

"I was telling people yesterday (Tuesday) that the defense of the Mount Wilson Observatory was taking on the feel of a mini-Alamo," said John Clearwater, a spokesman for Angeles National Forest, where the blaze erupted on Sept. 6.

Twelve firefighting crews on the ground waged an all-out campaign with water-dropping helicopters and airplane tankers loaded with flame retardant, which crept to within 500 feet of the site. Also saved was an adjacent complex of broadcast and emergency communication towers.

But the blaze, still burning mostly uncontained, continued to pose a threat to several nearby foothill communities under evacuation orders.

The West Coast wildfires, which officials and scientists have described as unprecedented in scope and ferocity, have filled the region's skies with smoke and soot, compounding a public health crisis already posed by the coronavirus pandemic.

Scientists tracked the smoke as far away as Europe. The European Union's Copernicus Atmosphere Monitoring Service (CAMS) was monitoring the fires and movement of smoke across the United States and beyond.

The simultaneous burning of dozens of fires along the West Coast has stretched the resources of the three states to their limit, particularly in Oregon, where fires rarely impact the normally rainfall-rich Cascade Mountains the way they have this year.

Eight deaths have been confirmed in Oregon, with 12 people reported unaccounted for as search teams continued to scour incinerated towns for the missing. Nearly 4,000 evacuees remained displaced, according to the American Red Cross.

In California, authorities said 17,000 firefighters were still battling 25 major fires on Wednesday, as the state's death toll stood at 25. One fire-related fatality has been confirmed in Washington state.

Nearly 8,000 homes and other structures have been reduced to rubble by fires in all three states.