By Guy Faulconbridge and William James LONDON (Reuters) - An attempt by British lawmakers to prevent a no-deal Brexit was gaining momentum on Wednesday after the opposition Labour Party said it was likely to throw its parliamentary weight behind that. The United Kingdom, facing the deepest political crisis since World War Two, is due to leave the European Union at 2300 GMT on March 29 but has no approved deal on how the divorce will take place. Prime Minister Theresa May is battling to break the deadlock after last week's crushing defeat of her two-year attempt to forge an orderly divorce raised the prospect of an exit without a deal. 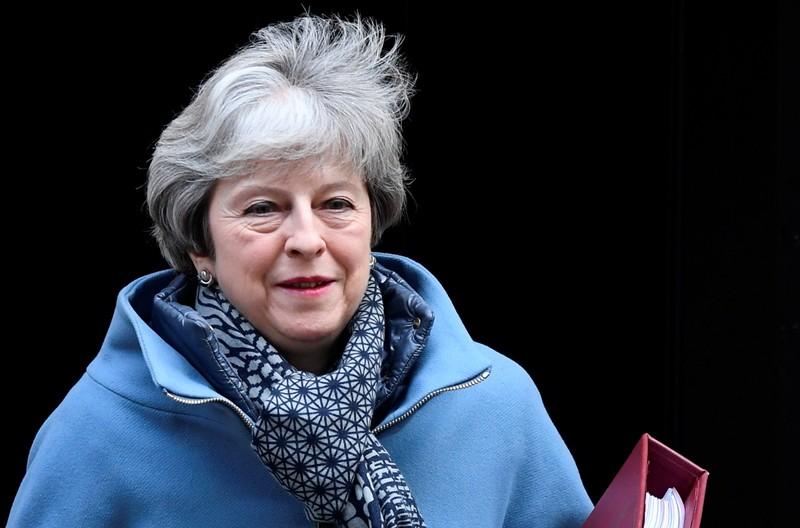 By Guy Faulconbridge and William James

LONDON (Reuters) - An attempt by British lawmakers to prevent a no-deal Brexit was gaining momentum on Wednesday after the opposition Labour Party said it was likely to throw its parliamentary weight behind that.

The United Kingdom, facing the deepest political crisis since World War Two, is due to leave the European Union at 2300 GMT on March 29 but has no approved deal on how the divorce will take place.

Prime Minister Theresa May is battling to break the deadlock after last week's crushing defeat of her two-year attempt to forge an orderly divorce raised the prospect of an exit without a deal.

In a step that could overturn centuries of constitutional convention, some lawmakers are trying to grab control of Brexit from the government in an attempt to prevent what they say would be an economically disastrous no-deal departure.

Labour will probably back one such attempt, an amendment proposed by Labour lawmaker Yvette Cooper that could result in May being given until Feb. 26 to get a deal approved by parliament or face lawmakers voting on delaying Brexit.

John McDonnell, the second most powerful figure in the party, told the BBC the amendment was sensible and Labour was "highly likely" to back it. At least nine Conservative lawmakers have also publicly said they will support it, suggesting it has a good chance of passing.

Sterling jumped to a 10-week high against the dollar, rising to $1.3079, on bets that a no-deal Brexit can be avoided if parliament exerts greater control over the process.

As the United Kingdom's tortuous crisis over EU membership approaches its finale, the possible outcomes for the world's fifth largest economy still include a no-deal Brexit, a last-minute deal, a delay or a snap election.

But the EU, whose members are also worried by the prospect of a disorderly Brexit that would cost jobs in major economies such as Germany, cautioned that no-deal was still the default scenario until London proposed something else.

"Preparing for a no-deal scenario is more important now than ever, even though I still hope that we can avoid this scenario," EU Brexit negotiator Michel Barnier said in Brussels.

"Opposing no-deal will not stop no-deal from happening," he said, adding it would be necessary for the British to find a majority in favour of another solution to a disorderly exit.

Europe's most powerful leader, German Chancellor Angela Merkel, said she wanted an orderly Brexit but that it was in London's hands.

May has said thwarting Brexit would threaten social cohesion by undermining faith in democracy, while police have said the "febrile" atmosphere could be exploited by far-right extremists.

Another alternative is that May gets enough concessions from the EU to win over rebels in her Conservative Party as well as the Northern Irish party that props up her minority government.

Some said they could be won over if May secures concessions on the so-called Northern Irish backstop, an insurance policy to keep the border open between the British province and Ireland if a future trade deal falls short.

"I think there is good news for us to hope that a reformation of this deal could be achieved that could make it acceptable," lawmaker Jacob Rees-Mogg said. "But ... it is not there yet and until it is, people like me will vote against."

Parliament will vote on Jan. 29 on different options put forward by lawmakers, potentially opening a way out of the stalemate.

A Labour spokesman said the party would "look at all mechanisms to take no deal off the table and to give parliament more of a say in this process" and that leader Jeremy Corbyn was meeting Cooper on Wednesday to discuss the amendment.

If her amendment is passed, it would effectively give parliament the power to set May a deadline of Feb. 26 to get a deal through parliament.

If May fails, parliament would be given a vote on asking the EU for a postponement of the Article 50 deadline to prevent Britain leaving without a deal on March 29. It proposes a nine-month extension, to Dec. 31.

If Britain asked to delay its departure under Article 50, the other 27 EU members would need to unanimously approve such a move, something EU officials say would be likely to be granted.

"If this question is presented, they will have questions for the British government: What is it for, what is the purpose? For how long?" Barnier said.

May told parliament the move would not solve the issue of the impasse in parliament.

"What we have seen is amendments seeking to engineer a situation where Article 50 is extended - that does not solve the issue, there will always be a point of decision. The decision remains the same: no deal, a deal or no Brexit," she said.

(Additional reporting by Kylie MacLellan and Andrew MacAskill in London and Alastair Macdonald and Gabriela Baczynska in Brussels; Writing by Guy Faulconbridge; Editing by Janet Lawrence and Andrew Cawthorne)