Washington: US secretary of state Mike Pompeo defended the Trump administration's decision to cut $300 million aid to Pakistan, and said Islamabad did not make satisfactory progress in combating terrorism. Pompeo is arriving in Islamabad along with General Joseph Dunford, Chairman of the Joint Chiefs of Staff, days after the Trump administration cancelled $300 million in military aid to Pakistan as it was not doing enough against terrorist groups inside its borders, the latest controversy to hit Islamabad's troubled relationship with Washington. 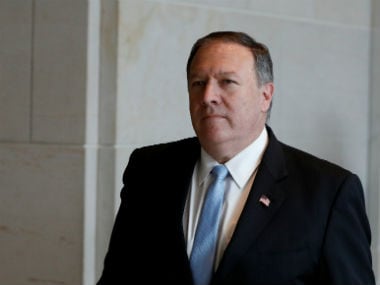 Pompeo's talks will be the Trump administration's first high-level dialogue with Pakistan since the new government of Prime Minister Imran Khan assumed office after the 25 July elections. Talking to reporters travelling with him hours before landing in Pakistan, the Secretary of State said: "The rationale for them (Pakistan) not getting the money is very clear. It's that we haven't seen the progress that we need to see from them".

The top American diplomat, during his meeting with Imran, army chief General Qamar Javed Bajwa and Foreign Minister Shah Mehmood Qureshi, would convey the same message of acting tough on terrorist organisations in Pakistan. "The very reason for this trip is to try and articulate what it is our expectation is, the things that they can do, the things that they expect us to do, and see if we can't find a path forward together," Pompeo said amid reports that the Pentagon has sought a Congressional approval to reprogramme  $300 million meant for financial assistance to Pakistan because of the lack of progress in fight against terrorism

However, Pompeo said that this was not news for Pakistan. "Look, this wasn't news to the Pakistanis. It made a lot of headlines over the last few days because of the formality... but they were told this past summer that they weren't likely to get that money," he said. Ahead of the meeting with Imran, Pompeo hoped that they can turn the page and begin to make progress.

"There are real expectations. We need Pakistan to seriously engage to help us get to the reconciliation we need in Afghanistan... They have important interests, security interests in Afghanistan to make sure they get the issues at their border right, and we need their help," Pompeo said. On his first trip to Pakistan after Imran became prime minister, Pompeo said he wanted to get there at the beginning of Imran's tenure in an effort to "reset the relationship" between the two countries

"We have worked closely with the Pakistanis in my role as the CIA director. Our teams have been working together for a long time. There are lots of challenges between our two nations for sure, but we're hopeful that with the new leadership that we can find common ground and begin to work on some of our shared problems together. They have expressed good-faith intention to do so," the Secretary of State said.

Pompeo said that he and Dunford would have opportunities to walk through the complexity that is this relationship and hopefully begin to make some progress so that they can get back to a set of common understandings. "So that's really the very straightforward objective. I think it's important to meet the new prime minister early on in his time in office," Pompeo said.

"Would that aid be back on the table if you do see measures that meet yours," he was asked. "I think the answer is probably yes," Pompeo said. "If we get to the place ? you have to remember what it was. Some of this was ? we use the term 'aid' loosely there. It's more complicated; it's different sets of resources. "But we were providing these resources when they made sense for the US, when it made sense because the partnership was in a place that the actions of our two countries, it made sense to do that. If that arises again, I am confident we'll present to the President the rationale for that, and then something like that might make sense," Pompeo added.