Mexican police use of guns at feminist protest in Cancun sparks anger, calls for probe

By Lizbeth Diaz MEXICO CITY (Reuters) - The United Nations and rights groups have urged a probe into the use of firearms by Mexican police this week to disperse a feminist protest in Cancun over the recent death of a young woman. 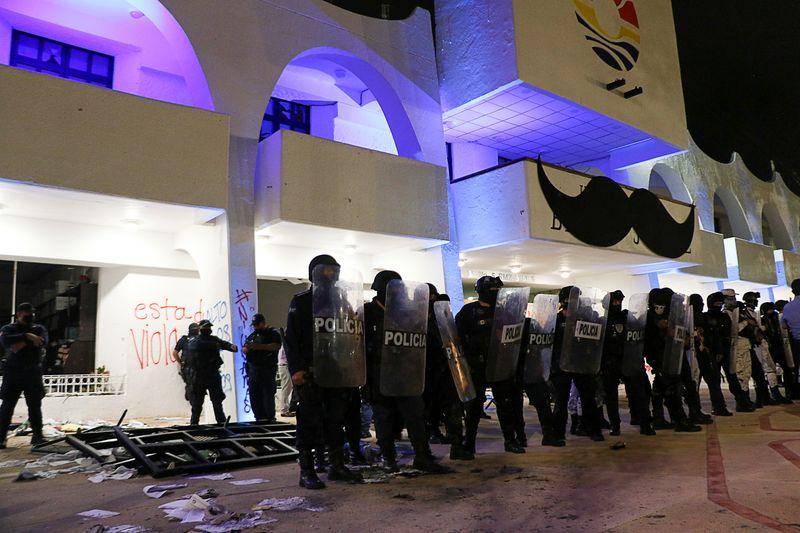 MEXICO CITY (Reuters) - The United Nations and rights groups have urged a probe into the use of firearms by Mexican police this week to disperse a feminist protest in Cancun over the recent death of a young woman.

Footage apparently taken by a protester of Monday night's protest in the tourist hotspot was widely shared on social media. The video shows a group of demonstrators trying to tear down plywood at the entrance of an office building before volleys of semi-automatic gunfire send them running for cover.

Reuters spoke to a journalist present at the protest who described scenes similar to those shown in the video.

At least two journalists were injured during the protests, said Mexico's Human Rights Commission. It did not say if the injuries were related to the gunshots.

The commission called for a "prompt" investigation and urged the government not to allow the use of live rounds by police at protests.

It was not immediately clear if the gunshots during the protest were live fire, rubber bullets or blanks.

Cancun police chief Eduardo Santamaria was fired on Tuesday, the city's mayor said on Twitter. Quintana Roo state police chief Alberto Capella said his officers were not involved in what he described as a "shameful" use of force that would be investigated.

The Mexico office of the United Nations High Commissioner for Human Rights condemned what it termed "excessive use of force" at the protests and urged an independent investigation.

Mexico's interior ministry has also called for an investigation into the "repression and armed aggression."

The protest was sparked by the death of Bianca 'Alexis' Lorenzana, 20, whose body was found mutilated over the weekend in Cancun "with clear traces of violence," according to local media.

A protest movement in Mexico demanding more action against the murder of women has been gaining momentum in recent months, with demonstrators taking over buildings and sometimes clashing with police.

"They hit me on the right hand and broke my cellphone," Hidrogo told Reuters. "The aggression was directly against us, against journalists who were broadcasting the demonstration live."

Cancun police did not immediately respond to a request for comment about Hidrogo's allegation.