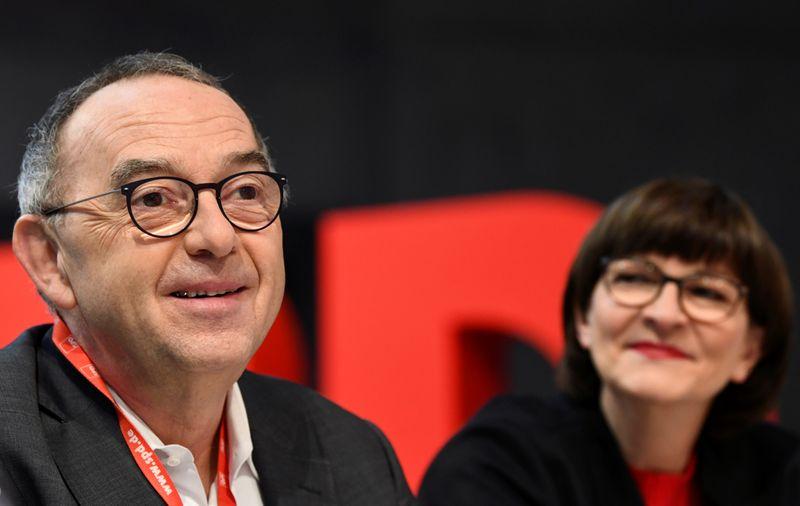 BERLIN (Reuters) - The leader of Chancellor Angela Merkel's conservatives sharply criticised attempts by the Social Democrats (SPD) to push their ruling coalition to the left, accusing her partners of thinking of themselves more than Germany.

The parties will decide in the next few weeks whether their centrist alliance has a future after the SPD chose a more leftist leadership duo, who have demanded new policies on climate, investment and the minimum wage.

Annegret Kramp-Karrenbauer, a Merkel protege and head of her conservative Christian Democrats (CDU), attacked the SPD for failing to commit to the coalition but stopped short of ruling out all their demands.

"Just like you can't be a little bit pregnant, you can't rule a little bit," she told Bild am Sonntag, saying the CDU was true to the coalition deal and she expected the same of the SPD.

"This coalition is for the country, not trauma therapy for ruling parties," she told the weekly.

Her comments set the stage for a tense start to talks on the coalition, though most commentators think the parties may be able to reach agreement on some at least some policies. Initial meetings are likely to start this week.

A collapse of the 18-month-old alliance could lead to a minority government or snap election, threatening instability in Europe's biggest economy at a time when many fear the strength of the far-right Alternative for Germany (AfD).

Merkel, who has led Germany for the past 14 years, has said she will not stand for a fifth term.

Investment is one potential area of conflict, with the SPD's new leaders having said they want to spend about 450 billion euros ($496 billion) on infrastructure over 10 years.

Though the party did not insist the government drop a commitment to achieving a balanced budget without incurring new debt, it has demanded more flexibility, which Kramp-Karrenbauer appeared to rule out.

"There is no point in making new debt," Kramp-Karrenbauer told the Frankfurter Allgemeine Sonntagszeitung, adding that the problem is not the money but bottlenecks in allocating funds.

Kramp-Karrenbauer also rejected SPD calls to raise the minimum wage, arguing that an independent commission rather than politicians should decide on the matter.

On climate policy Kramp-Karrenbauer said she did not want to start afresh after the government had only in September agreed a complex package aimed at ensuring Germany will meet targets to reduce greenhouse gas emissions.

However, there may be some room for manoeuvre, not least because the Greens are blocking legislation in the upper house.

While the SPD made relatively modest coalition demands, delegates at the party's conference agreed a more leftist agenda for its future approach to benefits, tax and the budget. The election of popular youth wing leader Kevin Kuehnert as one of its deputy leaders also marked a shift to the left.