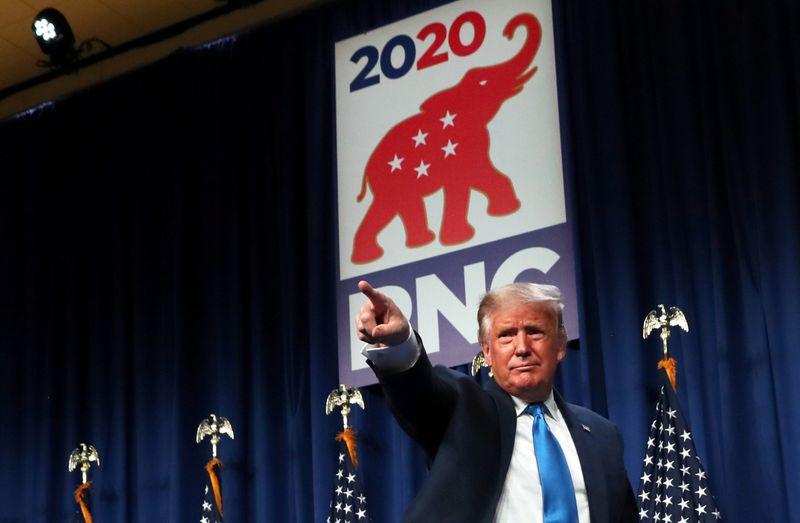 On the convention's Day One on Monday, Republicans painted a dire portrait of an America led by former Vice President Biden with Trump campaign adviser Kimberly Guilfoyle asserting that Democrats want to "destroy this country."

Democrats on Tuesday criticized their rivals' tone, saying Trump was to blame for the severity of the coronavirus outbreak, which has killed more than 177,000 Americans - more than any other country in the world - and thrown millions out of work.

Potentially playing into the dark picture, parts of Kenosha, Wisconsin, were smoldering after another night of unrest sparked by the shooting of a Black man by police. The man, who remains in intensive care, was shot in the back.

Americans speaking in defense of Trump's policies on Tuesday night include anti-abortion activist Abby Johnson, Maine lobsterman Jason Joyce and Mary Ann Mendoza, whose police officer son died in a head-on collision with a drunk driver who was in the country illegally.

"President Donald Trump is the first political leader we've ever seen take on the radical left to finally secure our border and to end illegal immigration since day one," Mendoza was expected to say, according to advance excerpts.

Mendoza, who has appeared at Trump events before, is also a consultant to We Build the Wall, the group whose fundraising led to criminal charges this month against former Trump adviser Steve Bannon.

'KNEE ON THE NECK OF DEMOCRACY'

With 70 days remaining until the presidential election, both Democrats and Republicans, despite scaling back their conventions due to the pandemic, have been no less aggressive in their messaging. Biden, 77, leads Trump, 74, in opinion polls.

Former Vice President Al Gore, a Democrat, said Trump was trying to "put his knee on the neck of democracy" by undermining mail-in ballots and sowing doubts, without evidence, about the election's legitimacy.

Former Secretary of State Hillary Clinton, who lost to Trump in 2016, said that if Biden was trailing in vote tallies on election night, he should not concede defeat because a deluge of mail ballots were expected to prolong the count.

Melania Trump's planned White House Rose Garden appearance and a speech by Pompeo while on a diplomatic trip to Israel have drawn criticism from Democrats. Trump himself will deliver a speech from the White House lawn on Thursday.

Democrats question the propriety of using the presidential residence for political purposes.

Pompeo plans to speak from Jerusalem even though he warned diplomats in July that presidential appointees should not take part in partisan activity, in a cable sent to all U.S. diplomatic and consular posts abroad.

Biden's deputy campaign manager, Kate Bedingfield, said Pompeo's decision to give a political speech during an overseas mission is a "blatant use of office for overtly political purposes" that undermines the critical work being done by the State Department.

The Democrat who chairs a U.S. House of Representatives subcommittee, Joaquin Castro, announced on Tuesday an investigation into whether Pompeo's appearance broke federal law and regulations.

The Trump campaign has shrugged off complaints about the use of federal properties as a partisan stage, and said it would ensure all staff and participants were in compliance with the 1939 Hatch Act restricting federal employees from engaging in certain political activities.

The president and vice president are excluded under the law, although there could be implications for staff depending on their level of involvement.

A total of 17 million people watched the Republican convention's first night on Monday, according to Nielsen, fewer than the 19.7 million TV viewers who watched the first night of the Democratic National Convention last week.