Recently, Purvi Patel, a 33-year-old Indian-American woman made history by becoming the woman in the US to be charged, convicted and sentenced for foeticide and child neglect.

Patel is in the process of assembling a new legal team and will file an appeal by 30 April. In this unusual case, which has set off many debates on women, their right to their reproductive organs and choice, there is another precedent being set.

Activists and advocates, both Indian-American and from the larger American mainstream, have joined hands in their support of Patel and in their condemnation of a justice system that they feel has unfairly and harshly prosecuted and punished her. And they are saying it publicly and loudly. They are starting conversations in Indian American households that have not happened before. 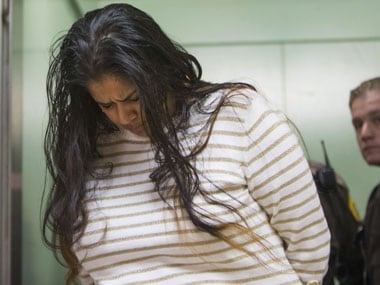 One of Patel's strongest defenders is Rev.Marie Siroky, a board member of the Indiana Religious Coalition for Reproductive Justice. A hospital chaplain, she is a member and minister at the Trinity United Church of Christ.

Siroky's interest was piqued when the case was first reported in the newspapers and she found herself drawn to Patel. She has been to court, goes to visit Patel in jail and remains in touch with the family who she says "are holding up, just that, holding up." However Siroky says Purvi Patel “has hope. She sees that so many people now realize that there is more to what happened than was earlier reported. She did not have a good defence."

She says she herself is disappointed by the judicial system.

"In the name of the law, Indiana is going after a woman who miscarried. There is no doubt in my mind that if this was a white woman, she would have not been charged at all and even if she was, not this harshly," she said.

Siroky is also outraged at the sensationalism of the case by the media. She has called reporters and asked why they have erroneously reported the facts and gone with the tawdry description of "baby being dumped in the dumpster by mother.

She points out that while Patel says that the age of the fetus was 20 weeks or less the prosecution has calculated the age to be anywhere from 22 to 26 weeks at least. "Even at 26 weeks, there is no guarantee that the fetus was survivable," argues Siroky, who has seen hundreds of cases with poor pregnancy outcomes in her work as a hospital chaplain.

Siroky and the IRCRC are clear they do not condone Patel's actions.

"Do I think Purvi made the right choice in placing the fetus in the dumpster? No. We do not know what happened. She was in a state of shock and hours later when bleeding, she went to the hospital and sought help. If we criminalize her, what message do we send women who miscarry? Do not come to the hospital?" she asks.

There are many factors in the case that anger Siroky.

"Police questioned Patel, when she was just out of surgery. She had lost a lot of blood and she was weak. This seems to me to be a violation of her civil rights. I do not believe she was advised that she could have counsel and I question why the hospital allowed the police into her room when she was in a compromised state and not under arrest or charged.”

As a chaplain, Siroky is disturbed that the medical team testified and focused on their patient's demeanor or rather what they believed her feelings to be.

"Nurses and physicians testified Patel was unemotional with a flat accent. In my decades of work in trauma and emergency rooms, I can say no two patients grieve or respond alike. There is no 'normal' way to react to a tragedy. Most women who suffer a miscarriage or pregnancy loss do not cry or look people in the eye."

She says they did not account for cultural differences.

"Professional caregivers need to realize these differences. Those from an oriental culture are usually less revealing and emotional. Russians and Eastern European are very expressive. Much of Purvi's ‘lack of emotion’ indeed may have been cultural and as well as shock."

While not a physician, Siroky contends that the medical testimony seems to be more opinion than medical fact. She cites the doctor's testimony that he has rarely seen an umbilical cord sever on its own during a miscarriage. (There are many editorials that point out that the local doctor Dr. Kelly McGuire, is a well documented member of the American Association of Pro-Life Obstetricians and Gynecologists)

Advocates also say that prosecutors alleged that Patel took an abortion-inducing drug but the toxicologist failed to find evidence of those in her blood work. Doctors used a discredited "lung float test" to determine whether the fetus was birthed alive but contemporary scientists reject that test.

Charges in the case have been contradictory, many editorials have pointed out: Patel was charged with feticide and neglect of a child. Feticide applies to an already dead fetus and neglect can only apply to a living child.

Dr. Sue Ellen Braulin, a founding member of the IRCRC was involved in the case from the time that Patel was admitted to the hospital. She made it a point to call the prosecution and asked them not to charge Patel under the Indiana law. She said that her organization would get involved if they were to file a case and she kept her word.

"This case is a huge failure of the public health care system and the legal system," Braulin says.

Jessica McBrier, a spokesperson for the St. Joseph County, prosecutor's office disagrees. She said that prosecutors tried the case with the testimonies of experts and "the jury convicted Patel." St. Joseph’s hospital declined to comment.

Patel has been getting strong support from the desi community.

Deepa Iyer, the former executive director of South Asian Americans Leading Together (SAALT) was one of the first to write editorials on Patel, slamming the "unduly harsh sentence" and pointing out the consequences of criminalizing pregnant women.

"The unfairness and the injustice of this case really struck a chord with me and while I am an activist with a highly developed sense of outrage, this case should set a lot of alarm bells to ring," she says.

She points out this is a very unique case but an important one for immigrants, women, minorities and for pregnancy advocates. She is hopeful that the empathy generated in the case will go a long way in raising awareness and in Patel winning her appeal.

Iyer who has worked for 15 years with South Asian communities on issues such as immigration reform and racial discrimination, played a pivotal role in setting up a coalition with the organization Apna Ghar,to raise money for the Patel family. So far $11,000 has been collected.

She says that there are many things the community could do to help Patel. Sign a petition at RhRealityCheck which will send a message to Indiana leaders about Purvi's case and the feticide law. Or sign a petition at whitehouse.gov where you can ask for a full pardon for Patel. Donate to the family and raise awareness by writing blogs, editorials and sharing them. When tweeting use the hashtag #Justice4Purvi. She also suggests sending a note of support to Patel through IRCRC. Or joining the Justice for Purvi Patel Facebook group.

Neha Gill, executive director of Apna Ghar, an organization is Chicago committed to ending gender violence and providing resources to immigrant women says they felt compelled to help the Patels and quickly assumed a leadership role in coordinating financial donations for them.

"This case is beyond the scope of what we usually do but it combines all the elements that we raise awareness for and we wanted to take a stand, we felt it was important," says Gill.

Ami Gandhi, executive director, South Asian American Policy & Research Institute believes that all Indian Americans need to stand up not just for Patel but "for our community, for social justice, for gender inequality, for women's right, for immigrant rights."

Gandhi has not only written a letter to the judge pleading for leniency for Patel, she has also urged many other Indian Americans to send letters as well.

"It's a very encouraging sign that they have written on her behalf. Our community does not speak up but they stepped up in this case," she says, adding that the support given to Purvi Patel has been unprecedented.

In her letter, Gandhi describes Patel as the "sole earner and the backbone of her family," and argues that "a lengthy sentence for Purvi would mean tremendous hardship for her parents and grandparents."

Patel worked for eight years running the family business Moe's Southwest Grill, seven days a week, came home, cooked for the family and helped physically take care of her grandparents who are in the nineties.

Gandhi, who was born and raised in Indiana and still has family there, says one of the reasons the case affected her profoundly is because she is expecting her first child.

"We say that the law should not be involved in exerting control over women and their reproductive organs, that is unacceptable," says Gandhi.

In Patel's case, while no advocate is comfortable discussing who the father of the child was or whether she was in a relationship, they all agree on one fact: Patel did not want to tell her parents either about her "relationship" or the "pregnancy" and Patel has said as much in her videotaped testimony to the police.

NBC News has reported that the pregnancy was a result of an affair Patel had with a married Hispanic co-worker. ABC News has reported that when Patel's parents took the stand in her trial they said that they did not know about the affair or the pregnancy. The father testified that as a strict Hindu, he was against sex outside marriage and his preference would be that his daughter be married to a Hindu but he would have loved his daughter regardless and would have welcomed the baby in his home.

The advocates in the case have not discussed this issue with Patel's parents for fear of both causing them pain and of appearing judgemental. But Gandhi says that the one silver lining that has come of this case is that it has started a larger conversation about women and their bodies in desi homes, even at her own dinner table with her in-laws and parents.

"I was gratified to see generations of Indian Americans who have started talking about women and the right to choose and they are very supportive of Purvi. They were not judgemental, the subject is no longer a taboo, which makes me sure that they will be accepting of other women who get pregnant and how they choose. It's an indication that things are just going to get better from here on."