By Elizabeth Piper and Kylie MacLellan LONDON (Reuters) - Prime Minister Theresa May's Brexit plans were thrown into further turmoil on Monday when the speaker of parliament ruled that she could not put her divorce deal to a new vote unless it was re-submitted in fundamentally different form. In comments that blindsided May's office, Speaker John Bercow said the government could not bring forward proposals for a vote in parliament that were substantially the same as had already been defeated twice before, in January and last week 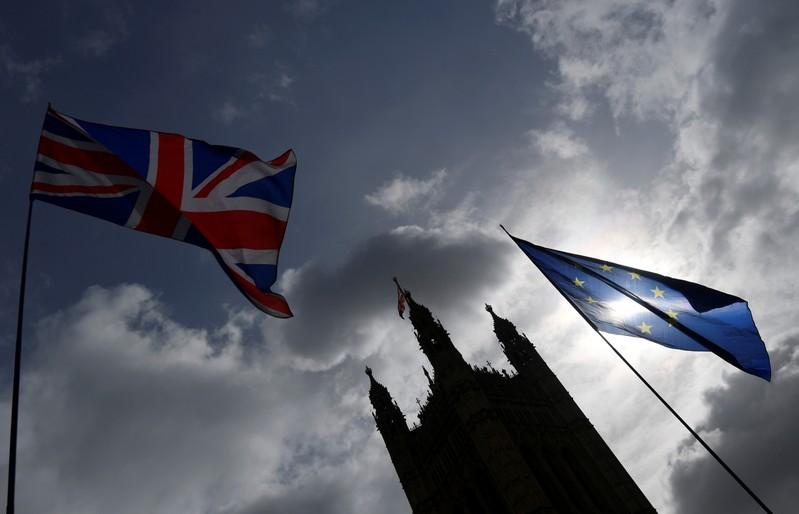 LONDON (Reuters) - Prime Minister Theresa May's Brexit plans were thrown into further turmoil on Monday when the speaker of parliament ruled that she could not put her divorce deal to a new vote unless it was re-submitted in fundamentally different form.

In comments that blindsided May's office, Speaker John Bercow said the government could not bring forward proposals for a vote in parliament that were substantially the same as had already been defeated twice before, in January and last week.

The ruling put Britain on a knife edge - Brexiteers seeking a complete break from the European Union saw a "no-deal" exit as now more likely while others thought May might put off Brexit beyond the set March 29 departure date, if the EU approves.

He told the BBC that one way to bring May's deal back for a vote in the House of Commons could be prorogation - ending the parliament session prematurely and starting a new one.

According to precedents stretching back to 1604, parliamentary rules say that substantially similar proposals cannot be voted on in the House of Commons more than once during the same session of parliament.

Bercow said his ruling should not be considered his last word and the government could bring forward a new proposition that was not the same as those already voted upon.

The pound fell to its day's low against the euro and the dollar on Bercow's statement, before recovering when the government said negotiations on a deal were continuing with lawmakers from Northern Ireland, who prop up May's minority government and have opposed her withdrawal accord so far. [GBP=D3]

"This is my conclusion: if the government wishes to bring forward a new proposition that is neither the same, nor substantially the same as that disposed of by the house on the 12th of March, this would be entirely in order," Bercow said.

The ruling was welcomed by eurosceptic lawmakers in May's Conservative party who have rejected her deal because the speaker's move seemed to increase the likelihood of Britain leaving the EU without a deal.

May's withdrawal deal negotiated with the EU last year was seen by Brexiteers as leaving Britain too closely aligned to the EU while depriving it of voting rights in the bloc.

"May I say how delighted I am that you have decided to follow precedent, which is something I am greatly in favour of," said Jacob Rees-Mogg, chairman of the European Research Group of eurosceptics in the House of Commons.

May's spokesman said her office had not been warned the statement was coming. Nor could Downing Street say anything about plans for a new Brexit vote or when it might be held.

Sterling dropped below $1.32 after Bercow's remarks, with investors saying it had damaged May's already sagging prospects of getting her EU withdrawal agreement ratified by parliament before March 29.

"Now the government will have to come back with substantial changes (which is literally impossible) in relation to the deal, otherwise it means a prolonged Brexit delay," said Naeem Aslam, chief market analyst at retail broker Think Forex.

EU leaders have ruled out renegotiating the exit deal.

"The chances of the UK crashing out of the EU have increased once again because the EU needs a clear plan and a strategy before they grant an extension," Aslam added.

Earlier on Monday it had appeared that May was winning support for her deal from erstwhile opponents but Bercow's decision will leave the prime minister scrambling for options.

Asked by a lawmaker whether further changes to the deal itself would be needed, Bercow said, "in all likelihood, the answer ... is yes", adding that a change in opinion would not constitute a change in the deal on offer.

"Fundamentally, for something to be different, it has to be by definition, fundamentally different. Not different in terms of wording, but difference in terms of substance and this is in the context of a negotiation with others outside the United Kingdom," Bercow said.

That would appear to pose problems for May. EU leaders have said repeatedly that the terms of Britain's withdrawal cannot be revisited.

As it stands, Britain is due to leave the EU by default in 11 days. But parliament voted last week for a delay and May is expected to seek an extension to that deadline when she meets EU leaders at a summit on Thursday.

To compound her problems, May appeared unlikely to reach agreement this week on her Brexit plans with the Democratic Unionists, the small Northern Irish party whose support is vital if she is to get her EU departure deal through parliament.

May's spokesman said talks were continuing with the DUP.

May had earlier warned lawmakers that unless they approve her Brexit divorce blueprint, Britain's exit from the EU could face a long delay which many Brexiteers fear would mean Britain may never leave.

After two-and-a-half years of negotiations with the EU, the final outcome remains uncertain - with options including a long postponement, exiting with May's deal, a economically disruptive exit without a deal, or even another EU membership referendum.

May's blueprint, an attempt to retain close trading and security ties with the EU while leaving the bloc's formal political structures, was defeated by 230 votes in parliament on Jan. 15, and by 149 votes on March 12.