By Damon Darlin and Chris Kahn (Reuters) - More than half of Americans disapprove of the way U.S. President Donald Trump is handling relations with Russia, according to a Reuters/Ipsos poll conducted after his controversial summit and joint news conference with Russian President Vladimir Putin. However, Trump's performance at the Helsinki summit, where Trump refused to blame the Russian leader for meddling in the 2016 U.S 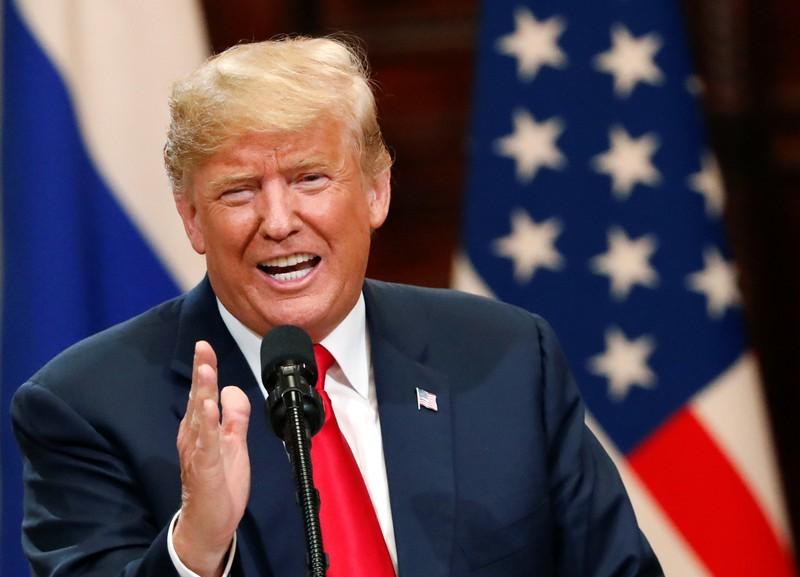 By Damon Darlin and Chris Kahn

(Reuters) - More than half of Americans disapprove of the way U.S. President Donald Trump is handling relations with Russia, according to a Reuters/Ipsos poll conducted after his controversial summit and joint news conference with Russian President Vladimir Putin.

However, Trump's performance at the Helsinki summit, where Trump refused to blame the Russian leader for meddling in the 2016 U.S. election and cast doubt on the findings of U.S. intelligence agencies, did not seem to have an impact on his overall approval rating.

Forty-two percent of registered voters said they approved of Trump’s performance in office in the latest opinion poll, compared with a daily average of between 40 and 44 percent so far in July.

The poll found that 55 percent of registered voters disapproved while 37 percent approved of his handling of relations with Russia.

Among Republicans, 71 percent approved of his handling of Russia compared to 14 percent of Democrats.

Trump still enjoys broad support among Republican voters despite criticism from party leaders about his words and actions while standing alongside the Russian leader answering questions from reporters, the poll results showed.

Trump surprised even his supporters when he praised the Russian leader during the news conference for his "strong and powerful" denial of meddling.

On Tuesday, Trump attempted to calm the political storm following his remarks, saying he misspoke at the news conference and had full confidence in U.S. agencies. But he appeared to veer from his script to add: "It could be other people also - there's a lot of people out there," he said.

A majority of registered voters, 59 percent, agree with the conclusions of U.S. intelligence agencies that Russia attempted to influence the U.S. election, the Reuters/Ipsos poll found. But only 32 percent of Republicans think that is true compared to 84 percent of Democrats.

The Reuters/Ipsos poll also revealed a distinct split among Republican and Democratic voters over whether Russia should be considered an adversary of the United States.

Overall, 38 percent of registered voters agreed that Russia is an enemy of the United States. About the same percent considered Russia "a competitor" while 8 percent said it was "a friend."

However, half the Democrats said it was an enemy while only about one in three Republicans considered it so.

Forty percent of Democrats described Russia as an imminent threat while only 14 percent of Republicans agreed.

Overall, 27 percent of registered voters considered Russia an imminent threat. Only North Korea got a higher response on that question, 31 percent.

The poll also asked Americans whether they think authorities will find evidence of an illegal relationship between the Trump administration and Russia. A slim majority, 51 percent, said it was likely, while 77 percent of Democrats and 19 percent of Republicans did.

The same general split was true when asked if Trump or someone from his campaign worked with Russia to influence the 2016 election. Overall, 52 percent of registered voters agreed. But 81 percent of Democrats said that was true versus 19 percent of Republicans.

The Reuters/Ipsos poll gathered responses from 1,011 registered voters throughout the United States, including 453 Republicans and 399 Democrats. The poll has a credibility interval, a measure of precision, of 4 percentage points.