By Matthias Williams KIEV (Reuters) - Ukraine has become entangled in a political battle in Washington between President Donald Trump and the Democrats ahead of the 2020 presidential election. Democrats launched an inquiry into the possible impeachment of Trump for asking Ukrainian President Volodymyr Zelenskiy to help smear Joe Biden, the frontrunner in the race to challenge Trump at the presidential elections next year. The U.S 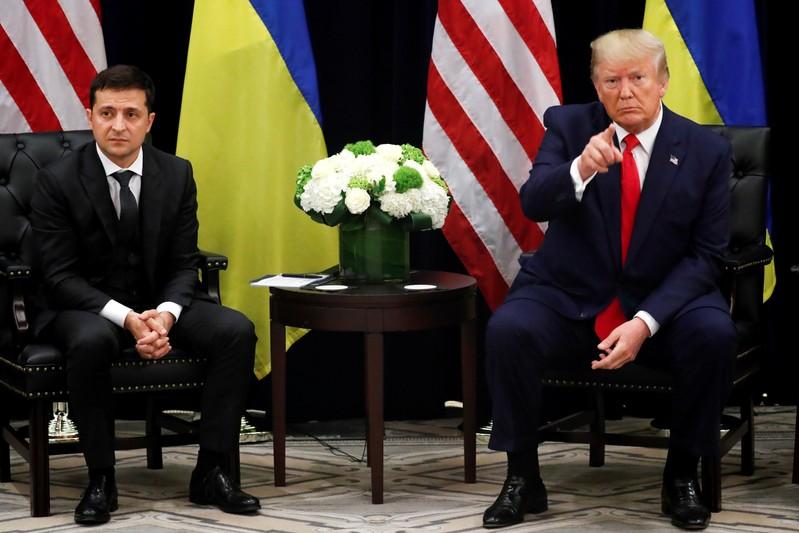 KIEV (Reuters) - Ukraine has become entangled in a political battle in Washington between President Donald Trump and the Democrats ahead of the 2020 presidential election.

Democrats launched an inquiry into the possible impeachment of Trump for asking Ukrainian President Volodymyr Zelenskiy to help smear Joe Biden, the frontrunner in the race to challenge Trump at the presidential elections next year.

The U.S. congressional committee on Thursday released a declassified version of a whistleblower report accusing Trump of using his office to solicit interference in the 2020 election from a foreign country.

Following are some of the main protagonists from the Ukrainian side of the story.

Zelenskiy is a former comedian who grew famous playing a fictional president in a popular TV series. Despite having no prior political experience, the 41-year-old won this year's presidential election by a landslide, promising to tackle corruption.

Trump and Zelenskiy spoke by phone on July 25, during which Trump asked Zelenskiy to investigate the Biden family. Earlier, Trump had frozen nearly $400 million of aid to Ukraine, prompting his critics to accuse him of using the funds as leverage to pressure Zelenskiy to pursue the investigation. Zelenskiy denies being pressured.

Shokin became Ukraine's general prosecutor in February 2015. Trump and his attorney Rudy Giuliani allege that Joe Biden, as vice president, bullied the Ukrainian authorities to fire Shokin in March 2016 because he was investigating the activities of Biden's son Hunter at a Ukrainian gas company called Burisma.

Biden and his son deny this version of events. During his tenure, Shokin's office was criticised by diplomats and anti-corruption activists as an obstacle to fighting corruption.

Lutsenko succeeded Shokin as general prosecutor. This year he made a series of allegations to The Hill website in Washington that dovetailed with statements by Giuliani.

The statements, which were listed in the whistleblower report, included allegations that Ukrainian officials and a lawmaker had collaborated to meddle in the 2016 U.S. election on Democratic nominee Hillary Clinton's behalf. He also alleged that the U.S. ambassador to Kiev had given him a list of people not to prosecute and that he was looking into Burisma and Biden's role at the company. He told Reuters last week he found no evidence of wrongdoing on Biden's part.

Lutsenko was fired after Zelenskiy became president. A former deputy justice minister who also worked at Transparency International briefly, Ryaboshapka became the new general prosecutor in August. He would lead any new investigation into the Biden family. Zelenskiy in his call with Trump boasted Ryaboshapka would "100%" be his person but this week stressed Ryaboshapka's office was independent.

Giuliani has singled out Leshchenko as an enemy of Trump. He said Leshchenko's claims about Manafort were fraudulent and part of a conspiracy to help Clinton win the 2016 election. Leshchenko was an adviser to Zelenskiy during his campaign but quit after Giuliani's public statements about him.

Yermak is a Zelenskiy aide whose meeting with Giuliani, after Zelenskiy's call with Trump, was flagged in the whistleblower report. The whistleblower said U.S. officials characterized the meeting as a "direct follow-up" to the call.

Zlochevsky founded Burisma in 2002. Zlochevsky headed Ukraine's Ministry of Environmental Protection from 2010-2012 and was a member of the Yanukovich's Party of Regions.

In 2012-2014, Zlochevsky worked as a deputy secretary of Ukraine's National Security and Defence Council which is in charge of all military and law-enforcement structures in Ukraine.

A career diplomat who had previously served as envoy to other ex-Soviet republics, Yovanovitch was the U.S. ambassador to Kiev until this year. Trump strongly criticised her in his phone call to Zelenskiy, and Zelenskiy agreed with Trump's criticism.