ANTANANARIVO (Reuters) - Madagascar presidential candidate Andry Rajoelina is leading in an election runoff after 92 percent of the votes were declared, the electoral commission said on Sunday, drawing allegations of fraud from rival Marc Ravalomanana. 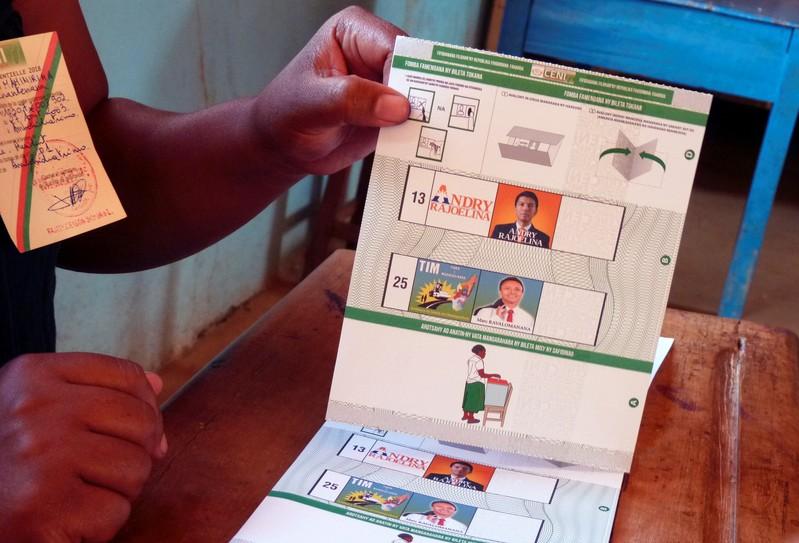 ANTANANARIVO (Reuters) - Madagascar presidential candidate Andry Rajoelina is leading in an election runoff after 92 percent of the votes were declared, the electoral commission said on Sunday, drawing allegations of fraud from rival Marc Ravalomanana.

The two ex-presidents -- Ravalomanana and the man who ousted him in a 2009 coup, Rajoelina -- had previously said they would accept the results, raising hopes of a peaceful outcome and no repeat of the political chaos nearly a decade ago.

But Ravalomanana said on Sunday the electoral body should investigate the election.

"Fraud and violence have prevailed and this has an impact on the results. The results of this election are not credible and the election is not transparent," he said in statement broadcast on Sunday.

"It is true that I said that I will respect the results if the rules are respected. Unfortunately, it is not the case," Ravalomanana said, calling on his supporters "whose rights have been violated, to stand up and defend their choices".

The electoral commission said it would help candidates verify the results for themselves.

"Candidates' representatives asked for the comparison of the minutes, the verification of the used and non-used ballot. In the name of transparency, the INEC accepts," Thierry Rakotonarivo, deputy chairman of the electoral commission told a news conference on Monday.

"Also, to show the will of the INEC, we can also publish the counting sheets, the ballots that have been used and that have been not used if it is needed, even it is not our competence."

He said full provisional results would be released on Thursday.

"We do not stray from the three principles that have guided us from the beginning: transparency, respect for the law and inclusiveness. We could publish those results sooner, but to give the candidates time to check them, we will only do it on Dec. 27."

The EU observer mission said the runoff election was calm.

"The voting operations were as calm as in the first round," Cristian Preda, head of the observation mission of the European Union said on Friday.

"We did not see any fraud. Both accused each other of fraud, but neither of them had any proof. There are allegations not facts. We told them to bring this to justice."

In the first round last month, Rajoelina received 39.23 percent of the vote compared to Ravalomanana's 35.35 percent.

Hery Rajaonarimampianina, who became president after Rajoelina stepped down in 2014, came a distant third.