By John Irish UNITED NATIONS (Reuters) - Trampling on the Palestinians and pushing unilateral initiatives will not resolve the Israeli-Palestinian conflict, French President Emmanuel Macron said on Tuesday, taking a swipe at U.S. counterpart Donald Trump's policy on the issue. 'What can resolve the crisis between Israel and Palestine 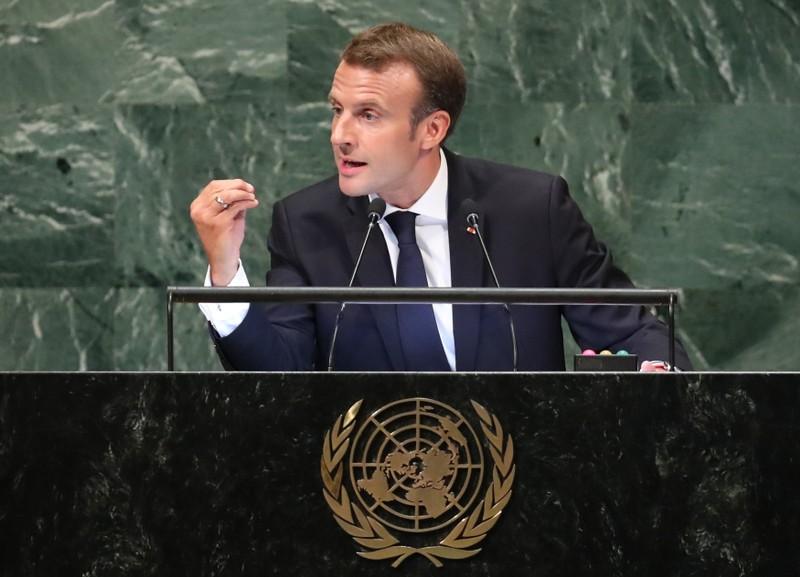 UNITED NATIONS (Reuters) - Trampling on the Palestinians and pushing unilateral initiatives will not resolve the Israeli-Palestinian conflict, French President Emmanuel Macron said on Tuesday, taking a swipe at U.S. counterpart Donald Trump's policy on the issue.

"What can resolve the crisis between Israel and Palestine? Not unilateral initiatives, nor trampling on the legitimate rights of the Palestinian people to legitimate peace nor underestimating Israel's fair right to security."

"There is no credible alternative to the two-state solution living side by side in peace and security with Jerusalem as capital."

Doubts have mounted over whether Trump's administration can secure what he has called the "ultimate deal" since December, when the U.S. president reversed decades of American policy and recognised Jerusalem as Israel’s capital and then moved the U.S. Embassy there.

Trump's move outraged the Palestinians, who have since boycotted Washington's peace efforts, led by the U.S. president's son-in-law and senior adviser, Jared Kushner.

The Trump administration has said it would support a two-state solution if the two sides agree.

Jerusalem is one of the major issues in the Israeli-Palestinian conflict. Israel considers all of Jerusalem – home to sites holy to Muslims, Jews and Christians - to be its capital, a claim not widely accepted internationally. The Palestinians want the city’s eastern part as the capital of a future state.

The United States has also cut off aid to the Palestinians and to UNRWA - the U.N. agency for Palestinian refugees -- and has ordered the Palestine Liberation Organization’s office in Washington shut, further angering Palestinian leaders.

Macron said Paris had unwavering friendship toward Israel, but called on Israel to end policies that undermined the possibility of a peace agreement.

"Continuing this path would be a mistake," he said.

French and European officials acknowledge they have little room to manoeuvre on the Middle East peace process.

However, in talks with Trump, Macron on Monday told the U.S. president that his policy of putting all the pressure on the Palestinians was not tenable and a solution had to be found, a French presidential source said.

The source said Trump had said he agreed that there needed to be progress and he would act quickly, the source said.

"There is no such thing as a unilateral agreement; it takes at least two parties to make an agreement. Helping the parties achieve that agreement, and work together to build a new future, deserves the strong, steady support of all our world," the king said.