'Loyal to my revolution': Despite Venezuela woes, Maduro has diehard fans

By Alexandra Ulmer CARACAS (Reuters) - Helen Blandin, a 44-year-old single mother, has seen her life crumble in tandem with Venezuela's devastated economy. The state employee earns the minimum wage, equivalent to around $2 a month due to a collapsing local currency. She can no longer eat meat regularly and has struggled to afford diapers and milk for her baby son 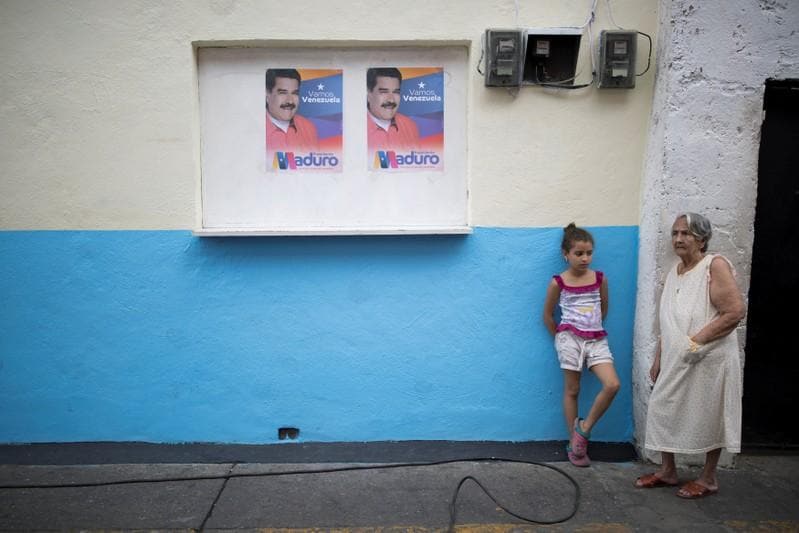 The state employee earns the minimum wage, equivalent to around $2 a month due to a collapsing local currency. She can no longer eat meat regularly and has struggled to afford diapers and milk for her baby son.

Despite all that, Blandin will cast her vote on Sunday for leftist leader Nicolas Maduro, who she adoringly proclaimed "My president!" during a recent pro-government rally in her poor hillside neighborhood of Petare overlooking eastern Caracas.

Blandin is part of an estimated one-fifth of Venezuela's population that political analysts and polls have identified as the bedrock of support for the "Chavismo" movement founded by late Socialist leader Hugo Chavez.

Her pain and devotion to the ruling party appear contradictory.

Poor Venezuelans like Blandin have suffered the most from Venezuela's dizzying list of woes including spreading disease, water and power cuts, violent crime and quintuple-digit inflation. She is convinced an "economic war" is to blame for her hardships, repeating Maduro's accusations that a cunning oligarchy is seeking to sabotage socialism in Latin America.

"We know where the evil is coming from. This is war from the opposition," said Blandin, clutching her son Luis under the sizzling sun as Latin pop blasted and several hundred government supporters danced and waved flags.

The enduring loyalty many Venezuelans feel toward Chavez and his legacy stems from the fact that his 1999-2013 government was, for much of country's poor majority, the first administration that had their interests at heart after decades of elites alternating power.

Chavez poured money from an oil bonanza into Cuban-staffed medical clinics and free housing for the poor, transforming the lives of millions before he died of cancer in 2013.

But under his successor Maduro, a former bus driver and union leader, the OPEC-nation with the world's biggest crude reserves has suffered five years of brutal recession.

For that, economists blame Chavez-era economics, including dysfunctional currency controls and botched nationalizations, that Maduro has refused to reform.

Many opposition supporters say poor Venezuelans have been duped into supporting a corrupt, autocratic government that is impoverishing the nation and indebting it to predatory allies like China and Russia.

Critics say a government-provided food-box or rations and occasional bonuses keep needy Venezuelans dependent on the state, and fearful of voting against the hand that feeds them.

"The Venezuelan people's needs now are so huge that any tiny relief, even for a day, calms people. They can't think about the future, because this government doesn't let them."

Barrios, raised in a rough neighborhood by a staunchly "Chavista" family, is part of a crop of younger politicians trying to change the opposition's reputation as elitist and out of touch.

But the opposition is torn by internal rivalries. Its boycott of Sunday's election - which it says is a sham - means it has even less impact in the disaffected hilltop slums that ring Caracas' lush valley.

Thanks to his control of state institutions and a ban on the opposition's most popular would-be candidates, Maduro is widely expected to win on Sunday. Even so, his main challenger Henri Falcon, a former state governor who broke the opposition boycott, is predicting an upset.

"HARDWORKING" BUT NOT "GALACTIC"

There is widespread discontent with the burly and mustachioed Maduro. He lacks the magnetism of his predecessor, Chavez, for whom many still proclaim a near-religious devotion.

Campaign leaflets commend Maduro for being "hardworking" and "loyal" - a far cry from the effusive vocabulary that still swirls around Chavez, who is frequently referred to as "galactic" and "eternal."

Maduro's approval levels have plummeted from around 55 percent just after his narrow election in 2013 to hover around 20-25 percent in the last few years.

Even "Chavista" strongholds have protested over patchy water supply or delays in the food box ration, but that does not necessarily mean they are turning their back on "21st century socialism."

"They see the protests as leverage to press Maduro to improve his government ... but they don't see it as going on the other side," said Dimitris Pantoulas, a Caracas-based analyst who tracks Socialist Party politics.

Aware of the pressure, Maduro has vowed an economic "rebirth" for Venezuela if he wins on Sunday. Although he has yet to offer any specifics, the promise could be key for those supporting him despite their increasingly difficult daily life.

"Maduro has to improve this, stock the shelves," said seamstress Josefina Guevara, 37, who lives in a property "invasion" encouraged in the Chavez era.

"The opposition hasn't let him, they're putting up obstacles. He'll solve it after being re-elected," said Guevara, wearing a blue T-shirt emblazoned with a big 'M' for Maduro.

India, US committed to taking on toughest challenges together, says Joe Biden after meeting PM

Foreign Secretary Harsh Vardhan Shringla said that the two leaders had wide-ranging discussions, with a special emphasis on combating the COVID-19 crisis

Narendra Modi provided documentation that sheds light on the US president's Mumbai connection.