Two-thirds of the Cuban population voted to approve reforms in a new Family Code. AFP

Love is love! This will now hold true for all couples in Cuba as the country has legalised same-sex marriages.

In what is considered to be a big moment for the island nation, about two-thirds of the population voted to approve reforms in a new Family Code. The law also grants same-sex couples the right to adopt children.

The referendum is significant for the country, which has a history of persecuting gay people and sending them to work camps during the 1960s and 1970s, according to a report by BBC.

Preliminary results showed that 66 per cent of the votes counted were in favour of the reform while the law required 50 per cent of voters’ approval to be adopted.

Cuba is the most recent addition to the list of countries that allows same-sex marriages.

Let’s take a look at some of the nations that have legalised same-sex marriages in the recent past.

The country legalised same-sex marriages in 2021. The measure found the support of 64 per cent of voters.

Even though Switzerland had allowed same-sex couples to register their partnerships since 2007, some rights were restricted. The new measure made it possible for gay couples to adopt children. AFP

The new legislation made it possible for gay couples to adopt children. Lesbian couples were also allowed to have children through sperm donation after the referendum was passed.

Justice Minister Karin Keller-Sutter said, “Whoever loves each other and wants to get married will be able to do so, regardless of whether it is two men, two women, or a man and a woman.”

The move was opposed by the country’s right-wing party, the Swiss People’s Party. Monika Rueegger, a member of the party, told Reuters, “This was not about love and feelings. It was about children’s welfare.”

Chile approved marriage equality for same-sex couples last year in December. Both the houses of Chile’s Congress authorised the change with overwhelming majorities.

With the referendum that was supported by former President Sebastian Piñera, Chile became the eighth Latin American country to allow same-sex marriages.

The country’s LGBTQ community had long pushed for the law which was stalled by Congress since 2017.

According to a report by NPR, the new law extended full parental rights to same-sex parents as well as expanded spousal benefits for married same-sex couples.

In a tweet, former President Carlos Alvarado Quesada said the legalisation of same-sex marriages will give LGBTQ couples the same rights as any other family in the nation. “Together, under the same flag, we will build a better nation,” he said.

In 2018, Costa Rica’s Supreme Court ruled that banning same-sex marriages is unconstitutional and discriminatory. It then granted the parliament 18 months to change the law or the ban would be revoked automatically, according to a report by CBS News.

Ecuador’s apex court passed an order to recognise same-sex marriages, giving a much-needed boost to the country’s LGBTQ rights in 2019. 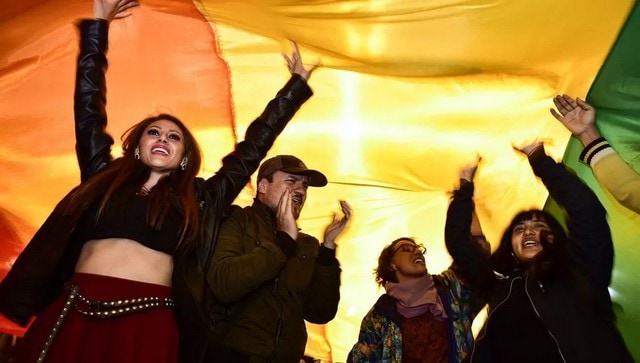 The measure was considered to be historic as Ecuador has a majority population of Catholics. AFP

The verdict was considered to be historic as Ecuador has a majority population of Catholics.

Judges in the country’s constitutional court ruled in favour of the law, arguing that the then marriage laws were largely discriminatory and unconstitutional. The country had legally recognised same-sex unions since 2015, with legislation that granted gay couples the same rights enjoyed by opposite-sex ones, except adoption.

In 2019, Taiwan became the first Asian country to approve a bill that legalised same-sex marriages.

According to a report by CNN, the order came almost two years after an existing law – which said that marriages can only take place between a man and a woman – was declared unconstitutional.

Veteran gay rights activist Chi Chia-Wei, who had spent 30 years fighting for marriage equality, had in 2015 filed a request challenging the country’s civil code that stated that marriage is between a man and a woman.

By 2017, based on many such requests, the court ruled that the code violated the constitution.

Other countries that allow same-sex marriages

Countries like the United States, the United Kingdom and Australia have also legalised same-sex marriage not too long ago.

According to a report by The Sun, same-sex marriages were legalised in the UK in 2013 despite receiving backlash from Tory leaders. The law was passed the then Prime Minister David Cameron who banked on the support of Liberal Democrats and the Labour Party.

In 2015, the Supreme Court of the US made same-sex marriages legal across the country. According to a report by USA Today, the case was brought up in the apex court after groups of same-sex couples sued stage agencies in Kentucky, Michigan, Ohio and Tennessee, challenging these states’ ban on same-sex marriages.

Australia’s parliament passed the marriage equality law in 2017, which allowed two people, regardless of their sex, to marry.