By Fabian Cambero SANTIAGO (Reuters) - A hooded, muscular man shielding himself with a traffic 'Stop' sign during a clash with police amid protests in the Chilean capital has gone viral on social networks, with the man being lauded as a romantic hero of the struggle that has raged for the past three weeks. The image of 'PareMan' or 'Captain Pare,' as he has become known - pare means stop in Spanish - was first captured on Oct. 30 by Reuters photographer Jorge Silva during protests on Santiago's central Alameda thoroughfare. 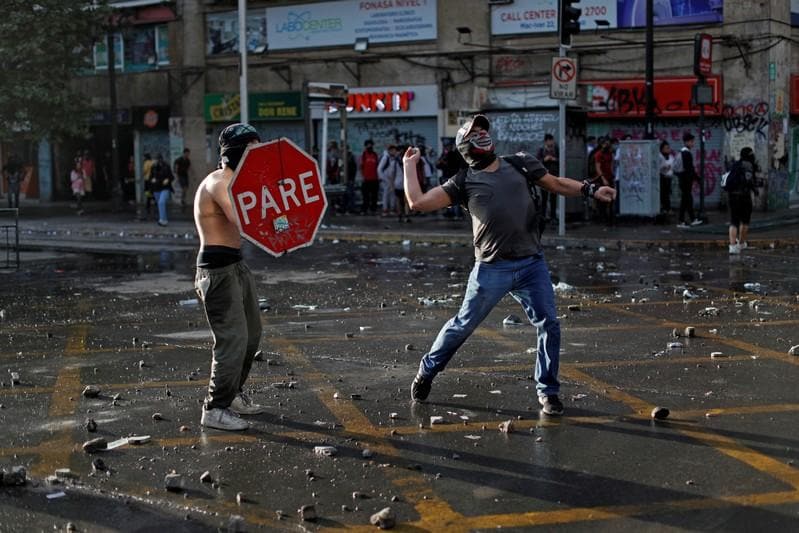 SANTIAGO (Reuters) - A hooded, muscular man shielding himself with a traffic "Stop" sign during a clash with police amid protests in the Chilean capital has gone viral on social networks, with the man being lauded as a romantic hero of the struggle that has raged for the past three weeks.

The image of "PareMan" or "Captain Pare," as he has become known - pare means stop in Spanish - was first captured on Oct. 30 by Reuters photographer Jorge Silva during protests on Santiago's central Alameda thoroughfare.

"He was a very striking figure on the frontline of the protest, with stones flying and the police using tear gas to disperse everyone," Silva said. "After I took those pictures, he just disappeared."

The man's image has since been widely replicated by local cartoonists. The phrase #PareMan has been trending on social media with some eulogizing him as the "First Chilean Superhero" of the protests, which started over a hike in public transport fares and has broadened to include grievances over low pensions and salaries, high utility rates and patchy public services.

So far, more than 7,000 people have been detained, at least 23 people have died, and some 1,659 protesters and 800 police officers have been injured, according to authorities and rights groups.

Guido Salinas, a Chilean caricaturist and comic book illustrator, wrote on Instagram that Pareman could not have known how prescient his act of holding the stop sign would be, amid accusations of human rights abuses facing the Chilean state, and social demands to end low pensions and high utility rates.

"There's something symbolic in the shield of this young rebel that perhaps even he didn't see at the time. He was plunged into the rage from which no one can escape today, it was just his way of protecting himself," Salinas wrote.

Salinas, in several of his images and those from other cartoonists and people creating social media memes, includes a dog nicknamed "Matapacos," a slang word which in Chilean Spanish translates as "police killer."

That dog, one of Santiago's many street dogs, was a black mongrel sporting a red bandana around his neck who frequently joined protesters taking part in the 2011 street demonstrations calling for free university education.

Matapacos was so-named because he displayed antipathy toward the riot police engaging the 2011 protesters in clashes, frequently appearing in pictures barking and snarling at them.

Other figures who have become social media phenomenons of the protest movement is a man who dresses as Spider-Man to conduct impromptu pole dancing sessions on the metro, where the protests first broke out, and another person who dressed as the Pokemon character "Pikachú" to dance among the street protesters.