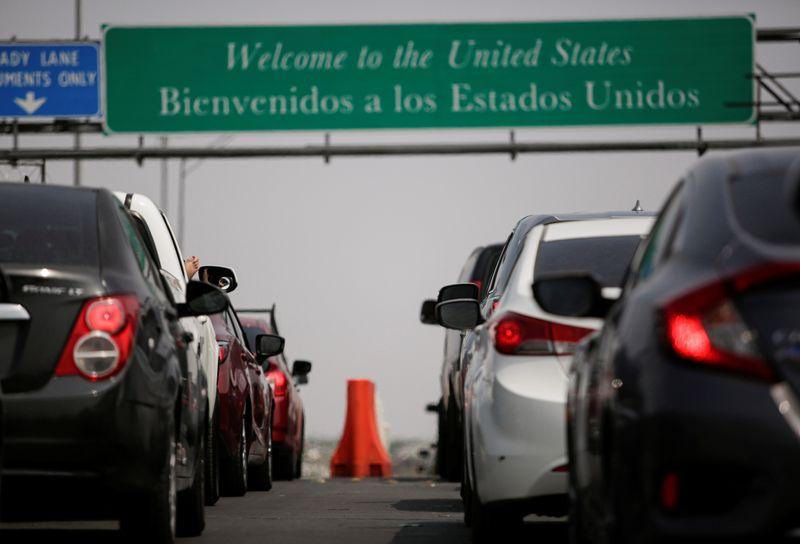 The U.S. government closed lanes at select ports of entry on the border and began conducting more secondary checks to limit non-essential travel and slow the spread of the novel coronavirus, a U.S. Customs and Border Protection (CBP) said on Friday.

According to CBP data, wait times at some border crossings have since doubled or tripled. Many crossing points now have only one or two lanes of traffic open. On Monday, border-crossers reported up to 5-6 hour wait times.

Jess Herr, 30, a U.S. citizen who lives in the Mexican border city of Tijuana and works at a restaurant in San Diego in southern California, said she usually wakes up at 4 a.m. and crosses by car in about an hour to make her shift. When she saw the long line of cars on Monday, she decided to cross by foot, although she still had to wait five hours to cross the border.

At the Cordoba bridge joining the Mexican city of Ciudad Juarez with El Paso in Texas, only two lanes were open to motorists. Border-crossers who usually waited about 45 minutes told Reuters they had waited more than three hours to cross, and some were late for work.

Melissa Reyes, general manager for Border Partners, a nonprofit organization, said she had waited 4-1/2 hours to cross the border back into the United States over the weekend after going to Puerto Palomas in Mexico to do some shopping. Normally the wait time would be 15-20 minutes.

The new restrictions announced last week would prove challenging for people who live lives that span both sides of the border, she said. “It’s gonna be pretty devastating,” she said.

The U.S.-Mexican border is the world's busiest land border.

Before coronavirus restrictions at the border began in March, over 950,000 people entered the United States from Mexico on foot or in cars on a typical day.

U.S. President Donald Trump has implemented a series of sweeping policies to curb legal and illegal immigration in recent months, saying the moves are necessary to limit the spread of the coronavirus or preserve jobs for American workers.

In March, the United States, Mexico and Canada agreed to bar non-essential travel across their shared borders, but the restrictions still allowed U.S. citizens and permanent residents to return to the United States.