London: British prime minister Theresa May said on Friday it was not helpful for people to speculate on any investigation after US president Donald Trump tweeted that the culprits behind a bombing on a train were in the sights of the police.

Asked about Trump's tweet saying that those responsible for the bomb in west London which injured 22 people were in the sights of Scotland Yard, May said, "I never think it’s helpful for anybody to speculate on what is an ongoing investigation."

Another attack in London by a loser terrorist.These are sick and demented people who were in the sights of Scotland Yard. Must be proactive!

She also said that the police and security services were doing all they could to identify those responsible for the "cowardly attack". 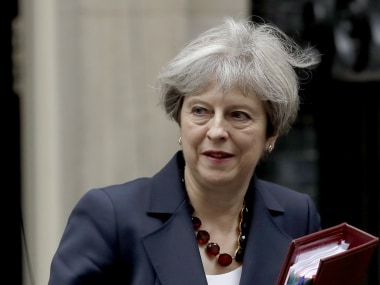 A home-made bomb on a packed rush-hour commuter train in London engulfed a carriage in flames and injured 22 people on Friday in what police said was Britain's fifth terrorism incident this year, but apparently failed to fully explode.

Passengers on board a train heading into the capital fled in panic as the fire erupted at Parsons Green underground station in West London at 8.20 a.m. (0720 GMT).

Some suffered burns while others were injured in a stampede to escape. The National Health Service said 22 people had been taken to London hospitals, most believed to be suffering flash burns. None were thought to be in a serious condition, the ambulance service said.